Autonomous security guard: what the Russian robot "Marker" is capable of

At the Vostochny cosmodrome, an experiment on using the Marker robot to patrol the territory of the space harbor has been completed. This was announced by the Advanced Research Foundation (FPI), which is involved in the development of the machine. As part of the experiment, "Marker" provided control of the state of the power supply lines and communications of the cosmodrome, and also monitored the integrity of the perimeter of the objects. According to analysts, robots of the Marker type can significantly increase the efficiency of guarding such large strategic facilities as spaceports. 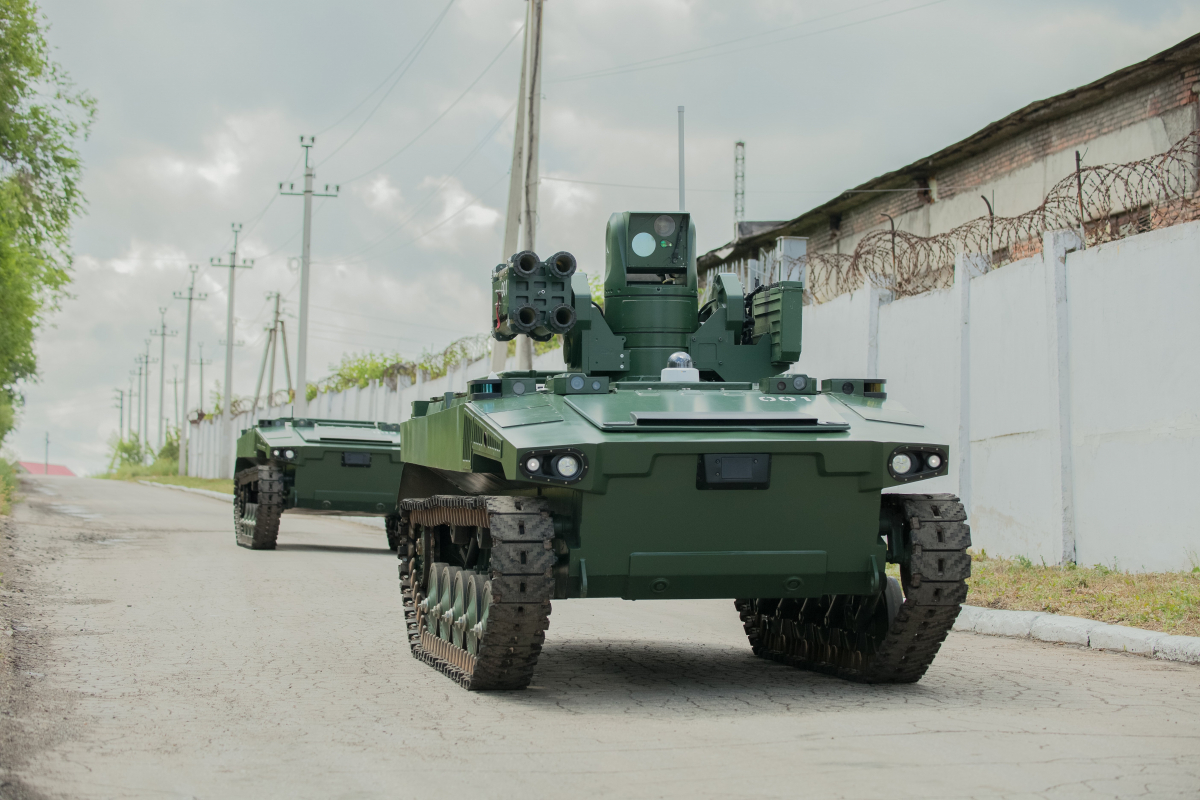 The experiment on the use of a security robot "Marker" to patrol the perimeter of the Vostochny cosmodrome has come to an end.

This was announced by the Advanced Research Foundation (FPI), which is involved in the development of the machine.

As part of the experiment, a wheeled version of the "Marker" was used, equipped with a universal optoelectronic module.

On the territory of the Vostochny cosmodrome, the machine monitored the condition of the power supply lines and communications of the space harbor, and also monitored the integrity of the perimeter of the objects.

“The movement was carried out along a given route in a completely autonomous mode, which was provided by an intelligent vision system.

The autonomy of a vehicle equipped with a hybrid power plant is up to three days, ”the FPI website says.

As part of the experiment, the identification of perimeter violators was also worked out.

According to the head of Roscosmos Dmitry Rogozin, machines of the Marker type can be used "to ensure the safety of cosmodromes, enterprises and other objects of state importance."

At the same time, he added that the experience gained during the creation of the robotic complex will be useful for the space industry.

“Five platforms have already been developed: two on wheeled chassis and three tracked.

Formed scientific and technical groundwork and technologies, including those with elements of artificial intelligence, will be used to create technology for the study and development of the Moon and the planets of the solar system.

The designers are already working out the possibility of autonomous movement of both single platforms and platforms in a group, ”says Rogozin.

In turn, the project manager of the National Center for the Development of Technologies and Basic Elements of Robotics of the Foundation for Advanced Study Arkady Petrosov emphasized that "the experimental robotic platform Marker has the best capabilities in Russia for autonomous movement in an unknown environment and object recognition based on artificial intelligence technologies."

"The results achieved during the experiment create the basis for the creation of promising robotic means capable of ensuring the safety of especially important state facilities," said Petrosov.

The implementation of the Marker project began in 2018.

Apart from FPI, NPO Androidnaya Tekhnika participates in the development of the platform.

As noted on the website of the Foundation for Advanced Study, the goal of the project is "to create and conduct a full-scale development of technologies and basic elements of ground-based robotics."

The car was first presented to the public in October 2019 at the Magnitogorsk test site.

During the presentation, "Marker" demonstrated the ability to automatically plot a route and autonomously move in urban conditions and on rough terrain.

As the head of the National Center for the Development of Technologies and Basic Elements of Robotics of the FPI Oleg Martyanov noted in an interview with TASS in June 2020, an important feature of the Marker is its modular design.

"The developers received a universal complex with a modular architecture, on which you can install, like in a Lego constructor, new components, assemblies, devices, and other equipment and check how efficient and promising they are in relation to existing samples, and test them," he said.

The creators of "Marker" emphasize that their project is experimental.

It is necessary for the development of key technologies of ground-based robotics: technical vision, communications, navigation, autonomous movement and application, as well as group control.

According to Martyanov, one of the key areas of research within the project "Marker" is the study of "the issues of group use of robotic systems, their coordinated and coordinated actions when performing tasks in an autonomous mode in an uncertain environment."

“We are working out scenarios when from two to five vehicles, having received a task for actions in some area, independently move there (not interfering, but helping each other) and perform the task in a single information and navigation field, feeding each other with the received data, distributing goals, ”said Oleg Martyanov.

It should be noted that the "Marker" is capable of performing tasks both in radio-controlled and autonomous modes.

At the same time, the developers intend to increase the level of platform autonomy.

“Today, the existing robotic systems both in our country and abroad imply remote control from the operator's console.

On the one hand, this is also a great success, because the operator was removed from the line of fire, but the control range is limited by the existing laws of radio communications, that is, 2-5 km.

Our task is to teach Marker to perform tasks independently at a greater distance from the operator, at a distance determined by the power reserve of robotic platforms, ”said Oleg Martyanov.

In addition to the security robot used at the cosmodrome, there is also a combat version of the "Marker".

In October, the media reported that field tests of the Markers were carried out in Russia, in which three robots on a wheeled chassis and two on a tracked chassis were involved.

The vehicles operated in an autonomous group and, without human participation, solved tasks of assigning targets, reaching optimal firing positions, independently responding to operational changes in the combat situation and exchanging target designations.

The strike platform "Marker" is equipped with two drones.

One of them is designed to provide the tasks of mapping, searching and determining targets, specifying routes of movement and forming a 3D image of the terrain.

The second is a small attack drone, whose tasks include target detection, identification and, if necessary, defeat.

At the same time, "Marker" has already mastered small arms and successfully solves the problem of engaging ground and air targets.

It is also possible to install grenade launcher systems on it.

“We teach Marker to determine the difference and, accordingly, shoot only at those targets that pose an immediate threat, while not hitting those objects that are on the firing trajectory,” Martyanov said.

"The question of the use of weapons remains with the person"

According to analysts, security robots such as "Marker" can be useful for the protection of vast strategic facilities, such as spaceports.

“The Vostochny cosmodrome has a very large perimeter.

For his protection, as a rule, fences and alarms are installed.

From time to time, employees go around this perimeter.

This requires a rather serious investment and time.

To protect such large territories, it is advisable to use such machines, "military expert Yuri Knutov said in an interview with RT.

Therefore, they are protected not only from casual visitors, but also from those people who go there to commit sabotage activities.

Unlike humans, such robots can guard around the clock.

But you need to understand that human participation in the work of such a robot is necessary.

The robot sees a lot, notices, but the question of using weapons, for example, remains with the person, "the expert said in an interview with RT.

Experts note that developers are gradually increasing the autonomy of robots, but in the foreseeable future, fully autonomous machines will not be used.

“Fully autonomous systems will not exist in the next 15-20 years, especially among the troops.

Because the main thing in such a system is to recognize the target and determine that it is a stranger.

So far, not a single country has been able to achieve optimal results in this matter, ”Leonkov said.

“Such devices have shown their effectiveness.

For example, in the air, unmanned aerial vehicles are much cheaper than full-fledged fighters.

In addition, they can stay in flight for longer, some models are able to stay in the air for two days.

A person cannot fly an airplane for so long without a break.

These advantages can be projected on ground robots as well, ”noted Yuri Knutov.

In turn, Alexey Leonkov drew attention to the fact that robotics is already being actively used in the troops.

Such vehicles can be effectively used on the battlefield, ”the expert concluded.