"I kept everything to myself": what is known about the Belarusian who collected video evidence of torture in Russian colonies

The name of the person who gave human rights activists a video archive of torture of prisoners in Russian prisons became known. It turned out to be 31-year-old Belarusian Sergei Savelyev, who himself was serving a sentence in the Saratov region for the distribution of drugs, and, according to him, on the instructions of the administration, collected official videos with beatings and rapes of prisoners. How a citizen of Belarus ended up in a Russian colony, why the FSB was involved in its development, and why my own sister was forced to turn to psychics, looking for a brother in prison - in the RT material. 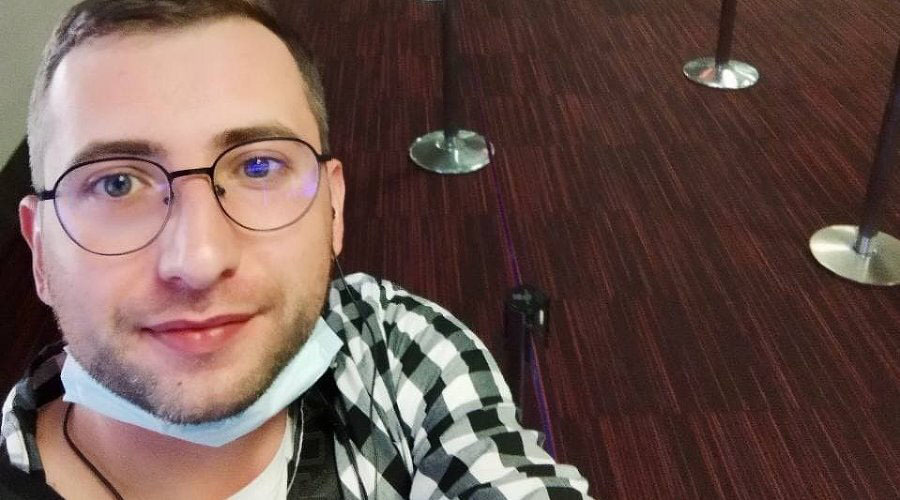 RT got acquainted with the materials of the criminal case against the Belarusian Sergei Savelyev, who gave human rights defenders a video of torture of prisoners in Russian colonies.

As follows from the documents, the man was engaged in the distribution of large consignments of drugs on the territory of the Krasnodar Territory, and the FSB officers were engaged in his development.

According to RT, Savelyev was born and raised in Minsk.

She and her sister lost their mother early.

His classmate, with whom he studied at school # 69 in Minsk from the eighth grade, told RT that he was a non-conflict teenager.

“He was very quiet, even withdrawn.

Definitely not a bully.

Sergei was not stupid, even a deep person.

I can't remember anything bad about him now.

He was a little different from the other boys, not particularly courageous.

He already had a feature at school: a lock of gray hair on the side, on his head.

But he was not bullied at school.

There were almost only girls in our class, and boys were worth their weight in gold.

When we graduated from school, he no longer maintained contact with classmates - we never saw him at alumni meetings, "Anna (name has been changed) told RT.

As Saveliev later told investigators, he told his relatives that he was going to work on the construction of Olympic facilities.

According to the materials of the criminal case, Savelyev settled in the city of Krymsk, Krasnodar Territory.

On a fake driver's license issued to a resident of the Moscow region Nikita Altynnikov, the young man rented an apartment and a garage for storing drugs.

In the criminal case, there are testimonies of several witnesses that Saveliev presented himself as Altynnikov in Krymsk.

According to the investigation, in June, Sergei made an agreement on the Internet with a seller from Moscow to buy drugs weighing almost 700 grams.

The substances were hidden in a car subwoofer.

In this case, the first package, according to the case file, came to the name of Sergei Savelyev.

After receiving the package, the young man packed the drugs in 14 transparent plastic bags and left them in the apartment he rented.

A couple of weeks later, Savelyev bought another batch of drugs weighing about 130 grams.

This time the package came to Nikita Altynnikov.

The drugs were in one of the five music speakers.

As the investigation established, Sergei conducted correspondence about the purchase of large consignments of drugs in the ICQ social network under the nickname "Tosha Altruist".

Finally, in early July, he received another consignment of drugs from Moscow to Nikita Altynnikov, hidden in two music speakers.

This time the batch size was more than one kilogram.

By this time, according to the materials of the case, the FSB officers for the Krasnodar Territory were already engaged in the development of Savelyev.

The operatives replaced drugs with a dummy in the last package.

At about four in the morning on July 17, Sergei made a drug load weighing 0.62 grams, and then returned to the apartment.

There he was detained by FSB officers.

According to the investigation, at that moment he weighed and filled in plastic bags dummies of drugs from the last batch.

During the search, he was found to have the remains of drugs from the first batch, several SIM cards for a mobile phone, scans of passports issued in Chuvashia.

While Savelyev was in jail under investigation, his relatives in Minsk announced his disappearance.

Since July 17, he has not responded to calls and messages from friends and relatives.

After the search did not bring any results, the girl turned to the "Battle of Psychics" program with a request to help her find her brother.

“If only I could find out that he is alive!

We went through a very difficult childhood with him!

He is so kind, trusting!

I wanted to start a quiet life, but something happened! "

- wrote the girl in her appeal to the program.

In the letter, she suggested that Sergei had become a victim of a criminal, since he had savings of about 100 thousand rubles.

According to her, her brother was saving money to buy a monument for his mother.

By mid-September, search engines in Belarus found out that Savelyev was under investigation.

During interrogations, Sergei himself admitted his guilt in forging a driver's license, but not in an attempt to sell drugs.

“... indicated that he had assisted in aiding the sale, had no contacts with the buyers of narcotic drugs, and had not received money from them.

For the rendered complicity, he received monetary rewards in different ways, ”the court's materials read.

In April 2015, Sergei Savelyev was sentenced to nine years in a strict regime colony.

He was found guilty of drug trafficking on an especially large scale.

In the term of serving his sentence, he was credited with almost two years, which he spent in a pre-trial detention center while the investigation was underway.

“The defendant is positively characterized by his place of residence, has repented of his deed, has not previously been convicted.

The court also takes into account the impact of the sentence imposed on the living conditions of his family, ”the court noted.

After the conviction, Sergei ended up in correctional colony No. 10 in Saratov.

In the winter of 2017, he fell ill with pneumonia, and he was sent to the Regional Tuberculosis Hospital No. 1 (OTB-1) of the Federal Penitentiary Service for the Saratov Region with suspicion of tuberculosis.

In an interview with the BBC, Sergei Savelyev said that in OTB-1 he was recruited to work on a computer.

He was supposed to keep and systematize official documentation, including video recordings made on official video recorders.

These devices are required to turn on employees of the Federal Penitentiary Service, while they are in execution.

According to him, over time, they began to "trust" him and the recordings of torture made on official video devices.

Serviceable, good, so that the sound, picture is normal.

To be fully charged, "Saveliev said.

He added that over time, he began to copy videos of rapes and beatings to external media and hide them on the territory of OTB-1.

Savelyev is sure that the administration of the institution was aware of the torture, because without their approval, the prisoners could not get official video recorders for such "special measures."

This version was previously confirmed by RT and prisoners who became victims of torture in OTB-1.

A 37-year-old former prisoner, Alexey, who was a victim of rape at OTB-1 in February 2020, recognized Sergei Savelyev from a photo.

“I knew that Sergei got a job in the OTB, but he never said anything about the video recordings.

Naturally, we did not discuss with him what was happening in the hospital.

In general, Sergei was such a "man - a gray mouse."

I kept everything to myself, "Alexei said in an interview with RT.

In January of this year, a court in Saratov granted Savelyev's request for parole.

The young man told reporters that when he was released, he was able to take out the video archive from OTB-1, because he studied the behavior of the employees well and knew what to expect from them.

After his release, Savelyev turned to human rights activists and reported on the video archive.

Vladimir Osechkin claims that on September 24, law enforcement officers detained Sergei at the St. Petersburg airport when he was heading to Novosibirsk to visit friends.

Even then, he was suspected of having kept his official videos, the human rights activist is sure.

After that, Sergei decided to leave Russia.

According to him, he flew from Novosibirsk to Moscow, and then crossed the border with Belarus on a regular minibus.

From Minsk Savelyev flew to Istanbul, and from there to Tunisia, where he began to plan a move to Paris.

On October 16, Sergei landed at the Paris airport and requested political asylum.

On October 18, Savelyev was released from the deportation center.

Experts interviewed by RT believe that Savelyev will have to prove to the French authorities that he needs political asylum.

“It doesn't matter if you have a criminal record in your country,” explains lawyer Yevgeny Shprits, who worked at the European Court of Human Rights.

- But the fact that his actions are capable of causing life-threatening persecution by state structures meets the criteria of a political refugee.

However, he will have to prove it.

There are no clear criteria here - the decision is always evaluative. "

The lawyer agrees with the international lawyer, special adviser on the sanctions law of the Pen & Paper Bar Association Sergey Glandin.

“Although the French Constitution stipulates that a person must be prosecuted for his actions in the interests of freedom, the French Republic has the right to grant asylum to any applicant.

France can grant asylum to a person if there is reason to believe that he or she is at a real risk, including the risk of torture.

The presence of a criminal past is unlikely to interfere with obtaining refugee status, ”the lawyer believes.

According to Glandin, the French authorities can refuse political asylum if a person is accused of a serious common crime, for example, corrupting humanity, and he fled from justice.

Frederic Belo, a lawyer for the Paris Bar Association, who represents the interests of Russian citizen Alexander Vinnik, is less optimistic about Savelyev's chances of obtaining political asylum in France.

“This rarely happens because there are strict conditions for granting political asylum.

A person should be subject to political persecution in his country: by the authorities and the police.

He must be involved in any political activity and prove that he is being persecuted for it, "explains Frederic Belo to RT.

In addition, it is necessary to submit the request correctly so that a special commission will analyze it, the lawyer adds.

Now the Investigative Committee is investigating seven criminal cases on five episodes of rape and two episodes of abuse of power with the use of violence in OTB-1 of the Federal Penitentiary Service in the Saratov Region.

The head of the hospital, Colonel Pavel Gatsenko, was fired two days after the publication of video recordings of severe beatings and rapes of prisoners.

The head of the Federal Penitentiary Service for the Saratov Region, Colonel Alexei Fedotov, was dismissed for "serious miscalculations" in his official activities.

At the same time, no official charges have yet been brought against any of the officials, lawyer Snezhana Muntian, who is protecting the interests of prisoners in the region, told RT.

“According to my information, only five prisoners were charged, all of them were“ activists ”who directly carried out torture,” the lawyer said.

She added that out of 14 alleged victims of torture, eight people refused to apply to the authorities with allegations of violence.

“I helped 14 alleged victims draw up statements, but only six are ready to apply to the authorities.

According to my information, pressure is being exerted on the prisoners to give up their claims, ”the interlocutor of RT said.