Hypersonic missiles provide the largest jump in this type of weapon since cruise missiles appeared more than 40 years ago (which fly at ground level attached to the ... 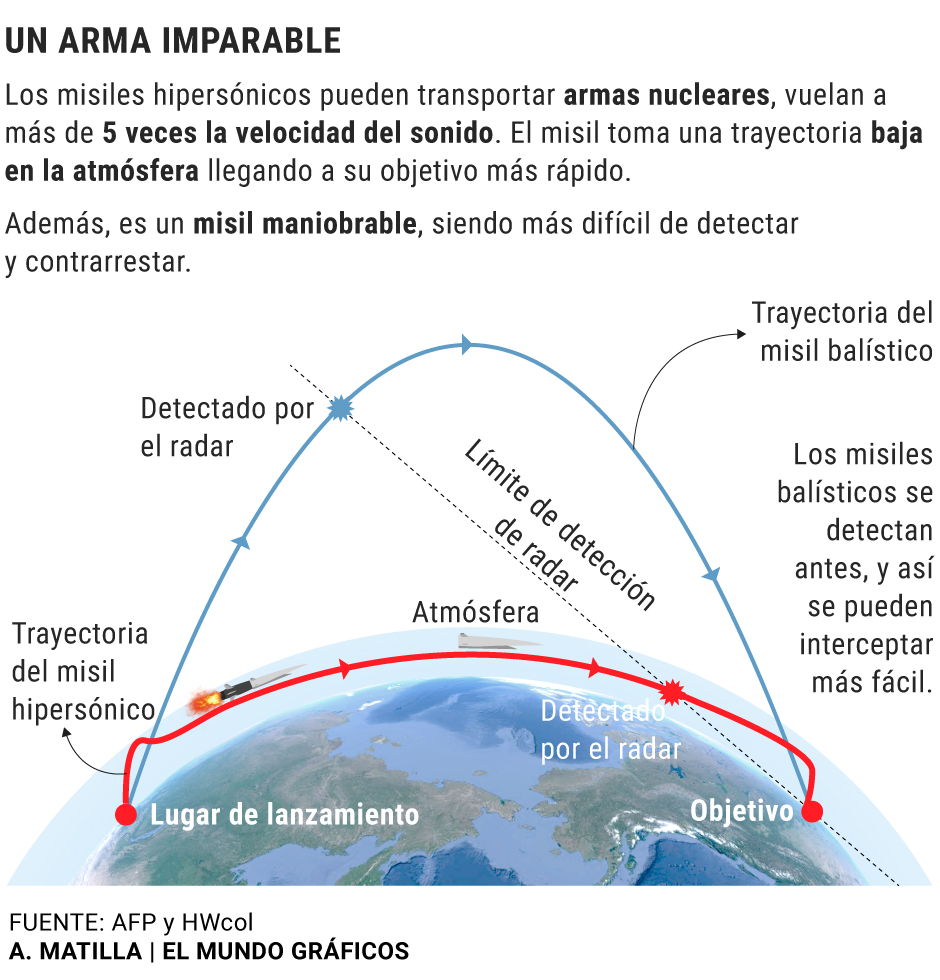 to geographical features) and maneuverable reentry vehicles, or MARV, for its acronym, appeared. in English (which allow nuclear or conventional warheads to change course by dribbling in the atmosphere following their targets).

Both types of aircraft - cruise missiles and MARVs -

are much more difficult to detect and intercept

. And hypersonic missiles take those characteristics to a new level that makes them, today,

. That, of course, if the missiles work. Because, according to the

missed the target by 38 kilometers

For something to be "hypersonic" it has to go at least five times the speed of sound,

which is about 100 kilometers per minute

There are two types of missiles of this type: ballistic, like China's, and cruise,

like the one tested by Russia in the Arctic in July

This second type is actually a much faster cruise missile than the current ones. Cruise missiles do not exceed the speed of sound, that is,

about 1,200 kilometers per hour

. That means that, if they are detected, they can be shot down even with past machine guns (and good luck). But the Tsirkon cruise missile launched by Russia in the Barents Sea reached, according to Moscow,

seven times the speed of sound

, or more than 8,000 kilometers per hour. That means that it took him just two and a half minutes to reach his target, located 350 kilometers, a distance similar to that between Madrid and Oviedo in a straight line, when a Tomahawk - a conventional US cruise missile - would have taken almost half an hour.

The Chinese-launched missile, however, is a different creature. It is a normal ballistic missile - in this case, a Larga Macha 2C, according to the

- with an atmospheric reentry head that, when targeting its target,

does so at more than 6,000 kilometers per hour

. As if that weren't enough, the Chinese missile appears to have been orbiting the Earth. That poses a direct threat to the United States, since it means that that country

could be attacked from the Southern Hemisphere

. All the defense systems of the United States point north, to the Arctic,

since that is the route from which Soviet missiles would arrive

, in the past, and Russian and Chinese, today.

Hypersonic ballistic missiles reach a much lower height than conventional missiles, since they are limited to being in the highest layers of the atmosphere, without going into outer space. In addition, its head of entry changes speed, heading and altitude. The combination of both factors makes them very difficult to detect and impossible to intercept. Thus, the antimissile system developed by the United States in Alaska and California to protect itself from North Korean attacks would be virtually rendered useless. In fact, hitting a conventional ballistic missile is very difficult. The US has done 20 tests with these missiles. Of these, 11 were a success and 9 or a failure.

The United States has been testing hypersonic missiles for years, but

has not yet developed the technology sufficiently to deploy these weapons

. Russia claims to have started the deployment of this type of weapons several years ago. China's case is more difficult to assess, given that Beijing is expanding its missile forces, but denies that they include hypersonic weapons. In any case, Washington believes that both Moscow and Beijing have hypersonic missiles, although they are much more concerned about China because that country has vastly greater economic resources than Russia. The US will not have such weapons in operation for several years.

claims to have launched such a missile in

it is also investigating this direction, as part of its rivalry with China.

In any case, given the secrecy of the countries, added to the tendency to propaganda by governments, it will be very difficult to know the state of development of this technology.

Covid-19 The 200,000 Chinese blood samples that 'hide' the origin of the coronavirus pandemic

The world wide openSteven Koonin: "Politicians' goals with the climate are not real"