Rome, Gualtieri speaks: "I will be the mayor of all the Romans and the Romans, now I will revive the city"

"An extraordinary job is beginning to relaunch Rome and make it grow", says the newly elected mayor of the capital 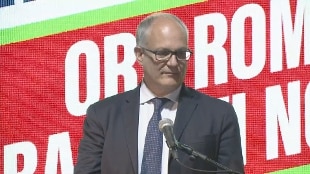 October 18, 2021 "I wanted to thank the Roman women and men for this very significant result, I am honored by the trust that has been placed in me. I will put all my efforts to honor it". Roberto Gualtieri said this, speaking from his electoral committee, after the victory in the ballot against the center-right candidate, Enrico Michetti.

Roberto Gualtieri thanked his challengers in the headquarters of his electoral committee: Enrico Michetti, Carlo Calenda and the mayor of Rome, Virginia Raggi, "for their commitment over the years".

Gualtieri thanked the volunteers of his committee and spoke of "a wonderful electoral campaign".