The turnout of citizens and residents to Hajj and Umrah campaigns to travel, to perform the rituals of Umrah of the Prophet’s birthday, has doubled, after the Saudi authorities’ decision to return the reception of the Two Holy Mosques to worshipers and pilgrims with full capacity. 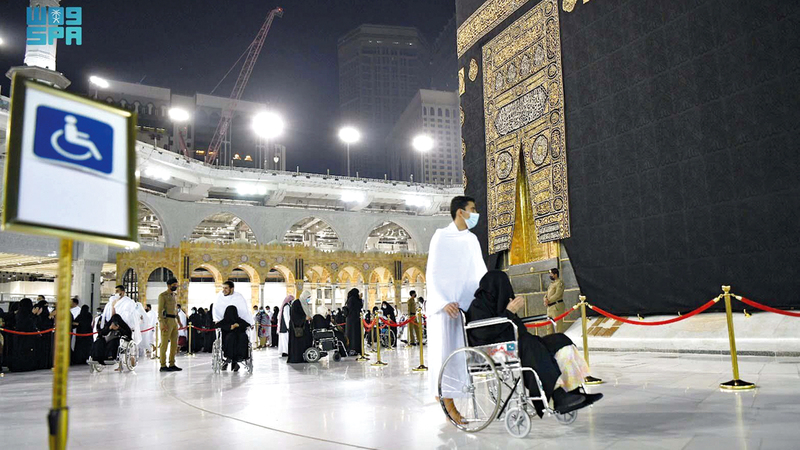 The turnout of citizens and residents to travel to Hajj and Umrah campaigns, to perform the rituals of Umrah of the Prophet’s birthday, has doubled, after the Saudi authorities’ decision to return to the Two Holy Mosques for worshipers and pilgrims with full capacity.

Various campaigns, trips and packages were allocated to suit different groups to perform Umrah, stressing the need to fulfill seven conditions or preventive measures for travel, the most important of which is the presentation of a certificate of obtaining two doses of any of the vaccines approved by the Kingdom (Pfizer - Moderna - AstraZeneca), or two doses of (Sinopharma). supported by a third dose of (Pfizer or AstraZeneca), and the travel date should be 14 days after receiving the last dose.

Officials in Hajj and Umrah campaigns told "Emirates Today" that, since Saudi Arabia announced the easing of precautionary measures and the return of the Two Holy Mosques to full capacity, they are dealing with a large number of travel requests to perform Umrah from citizens and residents, and all phones and electronic platforms for their campaigns do not stop responding to dealers, especially The Saudi decision coincided with the anniversary of the Prophet's birthday.

They pointed out that the list of prices for Umrah trips witnessed a noticeable increase, due to the increasing demand for the performance of rituals from around the world, which helped in the rise in the cost of flights and hotel accommodations, in addition to the additional fees imposed by the Kingdom on tourism companies.

Travel campaigns and special programs were allocated to citizens, while other campaigns provided “five-star” Umrah programs at prices starting from 4900 dirhams per person in a double room, including flight, visa, and accommodation in a “five-star” hotel close to the Haram, in addition to internal transfers with modern cars. While campaigns sought to deal with the increasing demand for Umrah requests by re-organizing Umrah trips, known as the “weekend” Umrah, which does not exceed three days, starting with travel on Thursday and returning on Saturday, at an average price of 1700 dirhams per person.

Most of the campaigns assigned their coordinators to organize awareness and guidance programs for those wishing to perform Umrah, during which seven conditions and preventive measures required for travel are reviewed, including “the age of the person wishing to travel to be at least 18 years, and that his passport be valid for more than six months, submit a personal photo, and obtain On an Umrah visa to enter Saudi territory (for residents of the country), and submit a certificate of obtaining two doses of any of the approved vaccines in Saudi Arabia (Pfizer - Moderna - AstraZeneca), or two doses (Sinopharma), supported by a third dose of (Pfizer or AstraZeneca), and to be The travel date is 14 days after receiving the last dose, and the conditions also included conducting a “PCR” examination in an accredited laboratory 72 hours before traveling, and its result will be negative, proving that the person is free of the virus, and another in Saudi lands before returning.

• The Weekend Umrah begins by traveling on Thursdays of every week and returning on Saturdays.

Officials of the Umrah and Hajj campaigns confirmed that the programs offered by their campaigns include additional preventive tasks, including educating pilgrims about the precautionary measures to be applied before they leave the country until they leave Saudi Arabia, in addition to emphasizing the validity of the data and information of the pilgrim, related to confirmed airline tickets for each pilgrim, and housing data, especially that The campaigns bear the responsibility for the integrity of this data, and for the obligations that may arise as a result of its incorrectness, stressing their keenness to make all efforts to preserve the safety of Umrah pilgrims, citizens and residents of the country, and to ensure the performance of safe rituals, in a reassuring and comfortable atmosphere.