"Wings Designs" .. The language of beauty tells the story chapters at "Expo"

Usually stories are told, spoken or read, but the situation here in “Expo 2020 Dubai” is different, as the stories are told in the language of beauty that goes beyond words, as many participating countries have used wonderful pavilion designs, competing in silence to tell their story, and deliver its story that carries within it 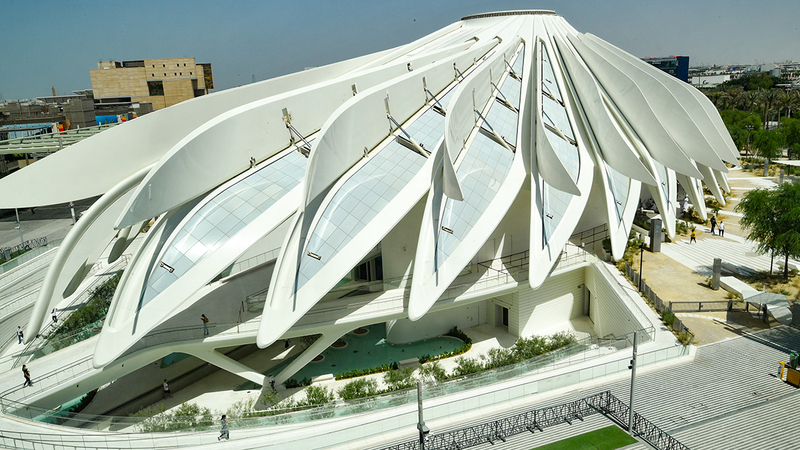 It carries messages from the past, present and future

"Wings Designs" .. The language of beauty tells the story chapters at "Expo"

The Emirates Pavilion embodies the "flying falcon" pride in the ancestral past.

Usually stories are told, spoken or read, but the situation here in “Expo 2020 Dubai” is different, as the stories are told in the language of beauty that goes beyond words, as many participating countries have used wonderful pavilion designs, competing in silence to tell their story, and deliver its story that carries It contains a three-dimensional message that includes the past, present and future.

"Emirates Today" monitors special stories embodied by countries participating in "Expo 2020 Dubai", where each visitor can stand in front of it and read it in silence, as the title of a special trip that he will spend on the threshold of each pavilion before entering it.

Visitors to "Expo Dubai" see that the designs constitute a major attraction for entering the pavilion of one country without another, in addition to the history of the country, noting that they decided to visit some countries only because of the special message that bore the title of the pavilion's exterior.

In front of the Al Wasl Dome, the UAE pavilion shines with a distinctive architectural design in the form of a falcon preparing to fly.

Reem Al Husseini, Executive Relations of the Protocol at the Emirates Pavilion at Expo 2020 Dubai, said, "The design of the pavilion came to meet the nobility of our history and the authenticity of our culture. His idea about his ability to portray the exceptional journey of a safe homeland with the capabilities of his sons to transform dreams into achievements that dazzled the world in various fields, and to introduce everyone to the lofty values ​​rooted in our society.”

Reem added that "the design of the pavilion in the form of a falcon preparing to fly, came to embody pride in the past of the ancestors who lived the life of the desert, passing through the present in which the UAE has become one of the most developed countries in the world, looking towards promising and distinguished future prospects in various fields, and achieving more unprecedented achievements. ».

She continued, "This distinctive shape of the pavilion resembles our personality, as it is neither rigid nor dry, but rather pulsates with life embodied by the water and tree falajs, which symbolize our inherited quest to search for oases and expand the spaces for everyone to benefit from."

For his part, the designer of the Egyptian pavilion at Expo Dubai, Engineer Hazem Hamadeh, says that “the design came as an architectural panel that combines the history of Egypt with its present and future, as the entrances to the building were established in a pyramid shape, an indication of the ancient history and past of Egypt, as well as modern colors were used in The building’s stones, while an electronic screen was designed in the form of the new Suez Canal, which Egypt opened years ago, in addition to welcoming messages in the hieroglyphic language engraved on the walls of the pavilion from the outside.

Engineer Hazem stressed that the direct message that the building brings together is that Egypt has a long history, an honorable present, and a promising future.

As for the appearance of the Saudi pavilion, it is different during the day than at night, as the visitor can see its reflection in a wonderful mirror during the day and enjoy an immersive experience and stunning scenes at night.

The advisor at the Saudi Royal Court, Vice-Chairman of the Supervisory Committee of the Saudi Pavilion participating in “Expo 2020 Dubai”, Mohammed bin Mazyad Al-Tuwaijri, confirmed that “the Kingdom has developed its pavilion at the exhibition to be a distinguished architectural landmark that embodies its unlimited ambitions towards a bright future, as the design of the pavilion reflects Its heritage, its diverse present, and its aspirations to build a future that flourishes with its opportunities.”

He added that "visitors of the Kingdom's pavilion can explore the beautiful and diverse environment in which the Kingdom is rich, learn about its ancient history that shaped its present, and then be directed towards the promising future of the Kingdom represented by an escalator surrounded by 2030 crystal pieces - symbolizing the Kingdom's vision 2030 - revealing its long plan. The term is for national transformation, and is complemented by pioneering global projects that enhance sustainable development opportunities.

As for the Japan Pavilion, it also has its different story, as the Secretary-General of the Japanese Pavilion, Eiko Yabunaka explains: “The facade of the building was designed in a distinctive way that combines the Arab arabesque style and the traditional Japanese Asanoha style, in a unique scene that embodies the long history of communication and cultural exchange between Japan and the East Middle ».

She added, "The pavilion is designed in a three-dimensional form of traditional decorative origami patterns that symbolize respect for others, using the Japanese art of origata for gift wrapping, by covering the facade with a layer made of a soft material inspired by traditional Japanese paper."

It is noteworthy that "Expo 2020 Dubai" brings together more than 192 countries from around the world, keen to highlight their culture through a pavilion that tells its own story, in an unconventional language, from outside and inside.

• Designs are a major attraction for visitors to enter one pavilion without another.

For a full view of the topic and for more photos,

The Swiss Pavilion narrates a message entitled “Reflections.” Designed to be a unique architectural masterpiece from the outside, the project presents the idea of ​​presenting reflections of the main Swiss landmarks, which include culture, nature, technology, innovations, and scientific achievements that are showcased through a series of elements and images. Interactive, from the beautiful nature of Switzerland, to the Swiss solutions for a sustainable future.

In the Opportunities area of ​​"Expo 2020 Dubai", the visitor in the Austrian Pavilion reads another story narrated by the design of 38 white conical buildings, built with a mixture of concrete and mud. Conical buildings of different heights force the air to move constantly, providing a temperature balance.

The Austrian Pavilion brings to life the advantages of combining the knowledge of traditional and modern buildings, free from pollutants, providing a pleasant atmosphere for the rooms and amazing lighting.