October 17, 1961: Macron denounces "inexcusable crimes for the Republic" Doves (AFP) Emmanuel Macron denounced on Saturday "inexcusable crimes for the Republic", on the occasion of an official ceremony for the 60th anniversary of the massacre of Algerians on October 17, 1961 in Paris, thus going further than the "bloody repression" admitted by François Hollande in 2012. Faced with relatives of victims sometimes in tears, the Head of State participated - an unpreceden 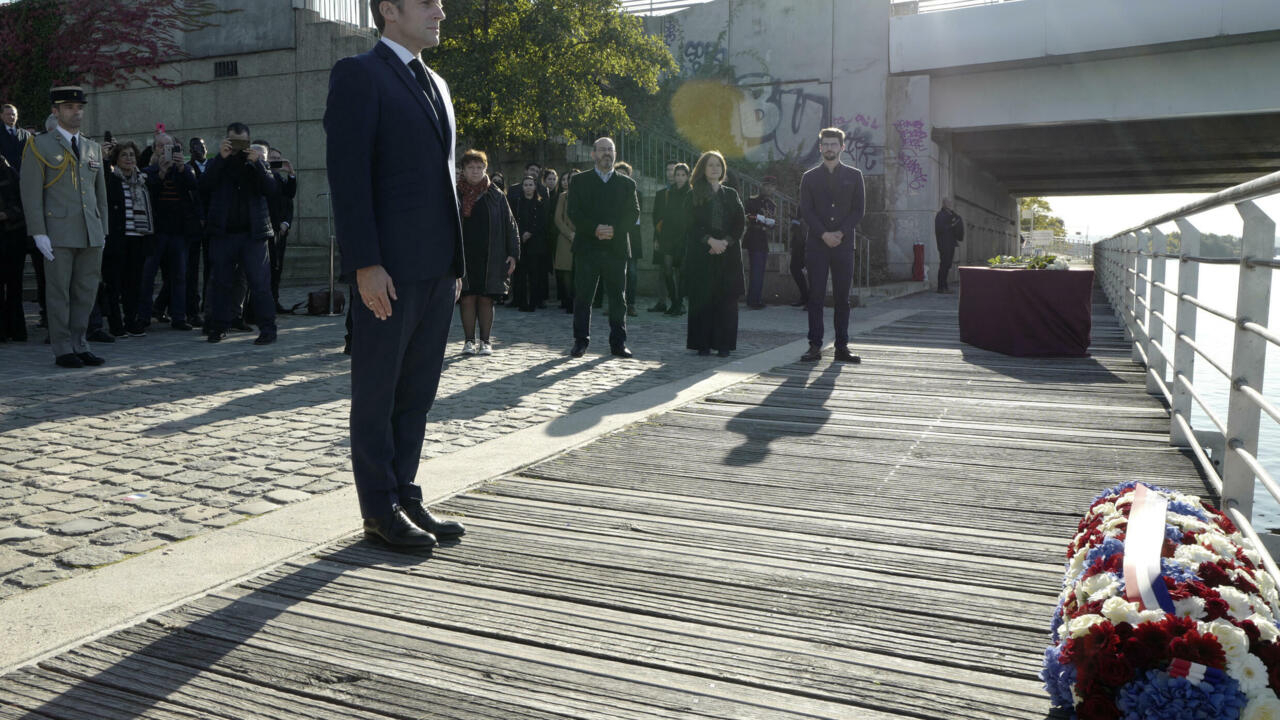 Emmanuel Macron denounced on Saturday "inexcusable crimes for the Republic", on the occasion of an official ceremony for the 60th anniversary of the massacre of Algerians on October 17, 1961 in Paris, thus going further than the "bloody repression" admitted by François Hollande in 2012.

Faced with relatives of victims sometimes in tears, the Head of State participated - an unprecedented gesture for a French president - in a tribute on the banks of the Seine, at the height of the Bezons bridge, borrowed 60 years ago by the Algerian demonstrators who arrived from the neighboring slum of Nanterre at the appeal of the branch of the FLN installed in France.

That night, a crackdown - "brutal, violent, bloody", in the words of the Elysee Palace - descended on demonstrators protesting against the ban on Algerians leaving their homes after 8:30 p.m.

"Nearly 12,000 Algerians were arrested and transferred to sorting centers at the Coubertin stadium, at the Palais des sports and in other places. In addition to many wounded, several dozen were killed, their bodies thrown into the Seine. Many families have never found the remains of their relatives, "the French presidency recalled on Saturday.

The number of dead from the massacre is estimated by historians at at least several dozen, the official toll counting only three.

On Saturday, his successor went further.

The Head of State "acknowledged the facts: the crimes committed that night under the authority of Maurice Papon are inexcusable for the Republic," said a statement from the Elysee Palace released just after the minute of silence and a wreath laying, referring to the one who was at the time the Prefect of Police of Paris.

"France looks at its entire history with lucidity and recognizes the clearly established responsibilities. It owes it first and foremost to itself, to all those whom the war in Algeria and its procession of crimes committed on all sides have bruised their flesh and soul, "the statement added.

Emmanuel Macron, the first French president born after the Algerian War ended in 1962, did not make a speech at the Bezons bridge but spoke on the spot with relatives of the victims, some of whom were in tears, to pay "tribute to the memory of all the victims "of a" tragedy long killed, denied or concealed ".

This gesture, six months before the presidential election, marks a new stage in the memorial battle led by Emmanuel Macron.

"There was Maurice Audin, Ali Boumendjel, forgiveness for the harkis ... We have made more progress on the memorial site in a few months than in 60 years", assures the historian Benjamin Stora who handed over to the Head of State in January a report on the colonization and the war in Algeria (1954-62).

On this occasion, Emmanuel Macron pledged to participate "in three commemorative and emblematic days": the first took place around September 25, national day of homage to the Harkis, the second this Saturday and the third next March 19 for the 60 years of the Evian Accords which ended the Algerian War.

Emmanuel Macron during a ceremony in memory of the Harkis at the Elysee Palace, September 20, 2021 GONZALO FUENTES POOL / AFP / Archives

On Saturday, left-wing politicians, such as LFI deputy Alexis Corbière and communist candidate Fabien Roussel, asked him to recognize the massacre of Algerians as "a state crime".

On the right, Marine Le Pen, for her part, criticized "these repetitively unsustainable repentances" and estimated that Emmanuel Macron "continues to belittle our country" while "Algeria insults us every day".

This ceremony takes place in a tense context between Paris and Algiers, after remarks by Mr. Macron reported by Le Monde which accused the Algerian "politico-military" system of maintaining a "memorial rent" by serving its people an "official history "which" is not based on truths ".

At the Elysee Palace, we are assured that the Head of State wishes above all to "look history in the face", as he did in Rwanda by recognizing the "responsibilities" of France in the genocide of the Tutsi of 1994 .

A number of commemorative events are planned for Sunday in Seine-Saint-Denis, including Bagnolet, Montreuil, Noisy-le-Sec where a poster by the artist Ernest Pignon-Ernest, representing the hands of a drowned man and bearing the words "a state crime, Paris on October 17, 1961", must be installed on Sunday on the facade of a building.

Nanterre will join the towns of Colombes, Gennevilliers, Bagneux, Malakoff and Châtillon for a souvenir walk that will start from the Esplanade de La Défense and join the Pont de Neuilly.