China News Review: China's "Space House" welcomes female astronauts for the first time. Where does "her power" come from? 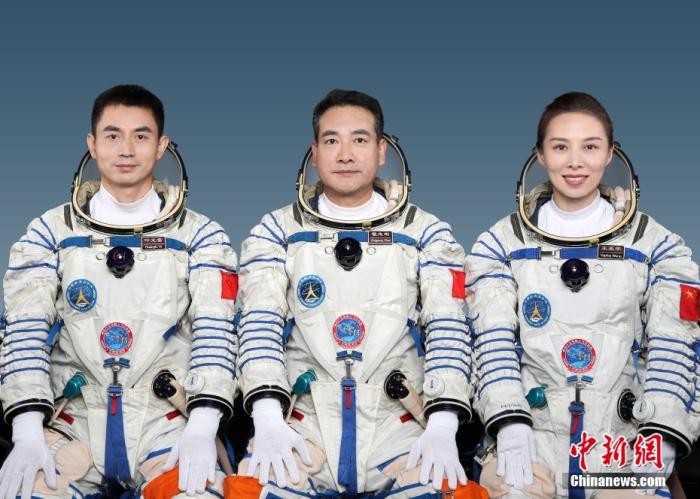 On the 16th, the Shenzhou 13 manned spacecraft successfully lifted off from the Jiuquan Satellite Launch Center with three Chinese astronauts.

In the next six months, the three astronauts Zhai Zhigang, Wang Yaping and Ye Guangfu will live on the Chinese Space Station and carry out a series of scientific experiments and missions in orbit.

On October 14, a press conference for the Shenzhou 13 manned mission was held at the Jiuquan Satellite Launch Center.

It is reported that Zhai Zhigang, Wang Yaping, and Ye Guangfu will carry out the Shenzhou 13 manned mission and stay in orbit for 6 months.

From Liu Yang, the first female astronaut to Wang Yaping, who entered the space station this time, female astronauts continue to create history, and at the same time, more and more people are paying attention to and inquiring about where the "her power" of China's aerospace comes from.

"Her power" benefits from the high-level development of aerospace.

Living in a weightless environment for a long time requires completing a number of space science experiments. The space station mission places higher requirements on the physical and psychological qualities of the astronauts.

Outstanding female astronauts stand out after hard work, which is the result of China's manned spaceflight selecting the best based on scientific training methods.

"Her power" is rooted in the outstanding female astronaut group.

Huang Weifen, chief designer of the astronaut system of China’s manned space project, designed China’s first astronaut training top-level plan, known as the "female astronaut instructor"; as the first female commander of the Wenchang space launch site, Zhou Chengyu, a girl born in 1995, became Chang'e Five The commander of the connector system of the lunar exploration mission was praised by netizens as "the eldest sister is not big, and the skill is not small"... As more and more women play an important role in various fields of aerospace, female astronauts are exhibiting at the "Space House" Skills are also a matter of course.

On March 14, Wang Yaping participated in the man-ship joint test.

"Her power" is inseparable from the humanistic care of aerospace science.

Based on the physiological characteristics and life needs of women, special preparations were made for the Shenzhou 13 mission: a spacecraft seat specially made according to the female figure to bring a more comfortable flight experience; custom-made space suits in the cabin to facilitate the daily work of female astronauts ; Configure chocolates, blood supplements, hygiene products and a small amount of non-toxic cosmetics, etc., and pay attention to the physiological needs and living conditions of female astronauts.

These preparations highlight the human considerations of manned spaceflight.

Only by providing better support for women's needs can women gather their strength and let "her power" grow.

Looking at the world, "her power" helps mankind to dream of space.

Not only do they have the ability to perform space missions, but they also feel sharper in some aspects, more detailed, consider issues more comprehensively, have better communication skills, and can bring more vitality to the flight crew.

On the other hand, understanding the earth, observing the universe, thinking about life from the perspective of women, and carrying out research on aerospace medicine and space science life that are dominated by women have also played a huge role in promoting the civilization and progress of human society.

From unmanned spaceflight to manned spaceflight, from single-ship flight to space station operation, from in-vehicle experiments to space walks, female astronauts all over the world are participating extensively in the process of space exploration.

With the arrival of the first female astronaut on the Chinese Space Station, humanity has moved forward again in exploring the mysteries of the universe.

In the future, "her power" will bring more surprises to mankind's further understanding of this vast galaxy.