Special notice from the court! Be wary of investments that promise an annual return rate of over 6%

Chinanews.com client, Beijing, October 14 (Peng Ningling) Pension insurance, investment management for the elderly, testamentary inheritance...How to make the elderly have a sense of security, support, happiness, and peace of mind? It is a topic that the whole society has always been concerned about.   On the eve of the Chongyang Festival, the traditional Chinese festival, the Second Intermedia 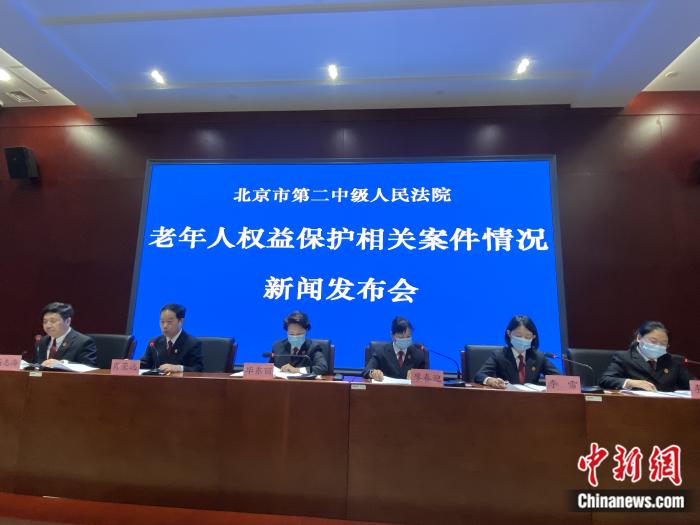 Chinanews.com client, Beijing, October 14 (Peng Ningling) Pension insurance, investment management for the elderly, testamentary inheritance...How to make the elderly have a sense of security, support, happiness, and peace of mind? It is a topic that the whole society has always been concerned about.

On the 13th, the Beijing Second Intermediate People's Court introduced the situation of the protection of the rights and interests of the elderly.

At the meeting, Bi Dongli, member of the Party Group of the Second Intermediate People's Court and vice president, first introduced the trial situation of administrative litigation cases of pension insurance in the institute.

my country is one of the countries with a relatively high degree of population aging in the world, with the largest number of elderly people, the fastest aging rate, and the heaviest task of responding to population aging.

With the acceleration of the aging of the population, the reform of my country's basic pension insurance system has continued to deepen, and relevant policies have continued to introduce new ones. The courts have accepted a large number of administrative cases of pension insurance, and the cases have shown new characteristics different from the past.

Bi Dongli pointed out that nearly 40% of substantive judgment cases involved calculation of deemed payment years, difficulty in verifying the basic facts involved in the case, strong policy nature of the case, and most of the general normative documents involved are the overall characteristics of the case.

Regarding the difficulty in verifying the basic facts involved in the case, Bi Dongli reminded that individual citizens should enhance their awareness of keeping personal archives.

In addition, the lack of original file materials affects the approval of pension insurance benefits. Individuals should pay attention to keeping original records, transfer orders, salary sheets and other objective evidence that can prove the lack of work experience, and actively submit them to the social insurance administrative department or the people’s court.

If there is any objection to the determination made by the social insurance administrative department, it shall seek relief in a timely manner.

Data map: The 2020 Chongyang Festival theme law popularization activity of "filial piety and respect for relatives along the way" will be held in Chaoyang Park, Beijing.

Older people, don't believe in "pies falling from the sky"!

Liao Chunying, vice president of the Beijing Second Intermediate People's Court, also informed the court about the situation of the investment and operation disputes involving the elderly.

It is reported that since 2018, the number of investment and operation disputes for the elderly accepted by the Second Intermediate People's Court has exceeded 10 each year, and the amount of the subject matter is more than 200,000 yuan.

Liao Chunying said that the cause of the dispute was mainly due to the senior citizens' preference for high returns in investment and operation, insufficient professional knowledge and insufficient risk prevention capabilities.

"The defendants in the relevant disputes promised an annual return of more than 8%, and the annual return promised in individual cases even exceeded 24%." Liao Chunying said that generally speaking, investments that promise a return rate of more than 6% per year should be vigilant. , Even if the early income is relatively stable, it still needs continuous attention.

The Second Intermediate People's Court specially reminded the elderly not to believe in the "pie in the sky" type of investment projects, and reject salesmen's promotion of "rebates" and other promotions that might make the property worthless.

In addition, it is necessary to choose legal and formal institutions for investment, do not trust the recommendations of friends and neighbors, and do not blindly step into investment fields that they do not understand.

Maintain a high level of vigilance for recommended items that include "high-priced repurchase" and "premium repurchase", and pay attention to the usual methods such as playing emotional cards and asking for warmth.