Iraq.. Al-Sadr forms a negotiating committee to discuss the government coalition, and Hezbollah accuses Al-Kazemi of rigging the elections

The leader of the Sadrist movement announced the formation of a negotiating committee comprising 4 leaders of the movement whose mission is to discuss making alliances to form the next government, while Hezbollah (Iraqi) accused Mustafa Al-Kazemi's government of rigging the parliamentary elections. 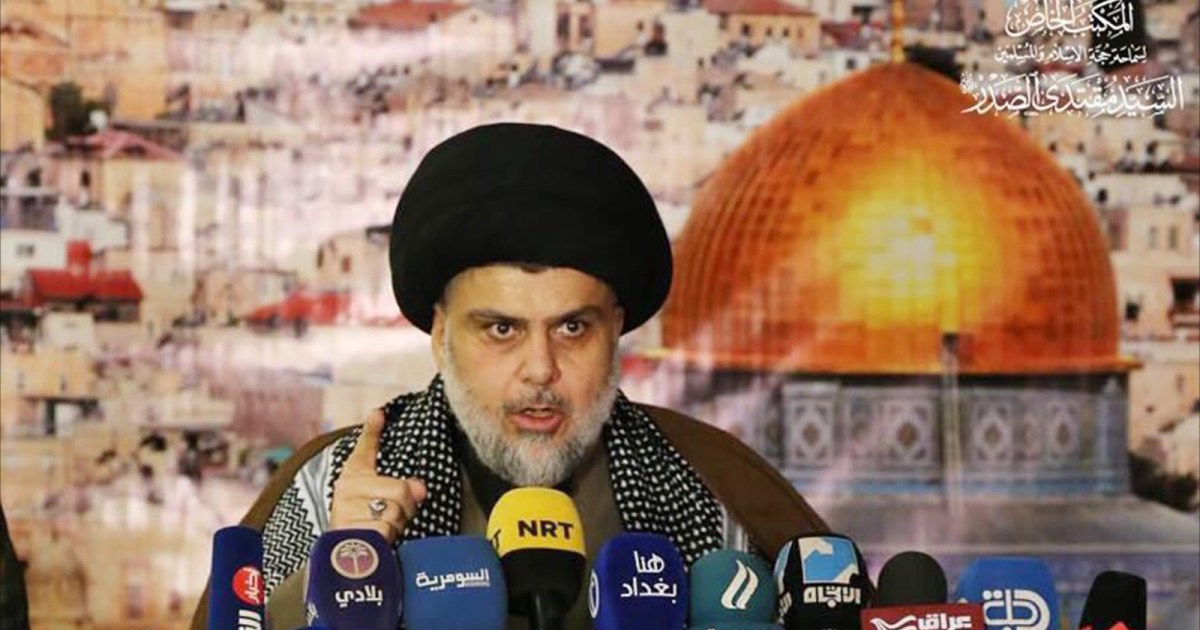 Today, Thursday, the leader of the Sadrist movement, Muqtada al-Sadr, announced the formation of a negotiating committee comprising 4 leaders of the movement, whose mission is to discuss the possibilities of forming alliances to form the next government, after the Sadrist movement issued the preliminary results of the parliamentary elections that took place last Sunday, while the Iraqi Hezbollah accused the Baghdad government of rigging. The results, and the former Prime Minister Haider al-Abadi called on the Electoral Commission to resolve the problems of the ballot.

A statement by Muqtada al-Sadr's office, whose movement (Sairoon Alliance) won 73 seats out of 329, stated that the committee will be the only body authorized to negotiate with other parties, and that the committee has full powers over the issue of parliamentary and political alliances for this stage, "provided that they return to us in the tasks of their affairs and avoid The alliance with us, they have notes," according to the statement.

Al-Sadr's announcement comes at a time when the final results of the parliamentary elections have not been announced, and the Independent High Electoral Commission continues to conduct a partial manual recount of some ballot boxes, due to the failure of electronic devices in polling stations.

On the other hand, the positions of some Shiite political forces that are skeptical about the integrity of the electoral process continue, as Abu Ali Al-Askari - the security official of the "Hezbollah Brigades" in Iraq - accused Iraqi Prime Minister Mustafa Al-Kazemi of interfering in the process of changing the preliminary results of the legislative elections.

Abu Ali al-Askari, the security official of the "Hezbollah Brigades" in Iraq, accused Iraqi Prime Minister Mustafa al-Kadhimi of interfering in the process of changing the preliminary results of the legislative elections.

In a statement, Al-Askari called on the judges supervising the elections to expose what he called "scandals of technical problems" in a number of devices used to transmit and count voters' votes.

He stated that what happened was a change in the number of seats obtained by some parties and adding them to others.

Al-Askari added - in the statement - "If they (the honorable judges) do not have the courage to do so, it will be revealed and officials and experts from the specialists in the commission will be named."

And the coordination framework group for a number of the most prominent Shiite political parties in Iraq - including the Al-Fateh Alliance - said that the chaos, confusion and inaccuracy that appeared in the past two days in presenting the facts reinforced their position of mistrust towards the Electoral Commission.

After the announcement of the preliminary results of the elections, last Monday, the Al-Fateh Alliance (which includes the Popular Mobilization factions), the National Coalition, the State of Law coalition, the Wisdom Movement, and the Victory Alliance, all of which are Shiite forces, in addition to the (Sunni) Islamic Party, rejected the election results.

In the same context, the head of the victory coalition and former Iraqi Prime Minister Haider al-Abadi called on the electoral commission to resolve the voting problems in the country, which confused the general situation.

"What is more important than electoral gain and loss is peace and national unity, and the integrity and goodness of the political system that represents the people," he said in a statement.

On the other hand, the leader of the Civil National Front and former Prime Minister Iyad Allawi called for holding an inclusive national dialogue conference without preconditions that would allow preparation for new elections, accusing the Electoral Commission of not being responsible for organizing the polls.

Allawi said in an interview with Al-Jazeera that "it is difficult for a party alone to form a government, and this is the opinion of many political forces," adding that his bloc boycotted the elections and it proved to be unfair and marred by many abuses.

According to the preliminary results published by the official news agency, the Sadrist bloc topped the results with 73 seats, while the Taqaddam bloc, led by dissolved Parliament Speaker Muhammad al-Halbousi, won 38 seats, and in third place, the State of Law bloc, led by former Prime Minister Nuri al-Maliki, won 37 seats. When the Al-Fateh Alliance led by Hadi Al-Amiri retreated and won only 14 seats, according to preliminary results, after it came in second place with 48 seats in the previous elections in 2018.

It is noteworthy that last Sunday’s elections took place a year ahead of their scheduled date after widespread protests in Iraq, rejecting corruption, the political class, the deterioration of services and the living situation, starting in early October 2019, and lasted for more than a year, and overthrew the previous government, led by Adel Abdul-Mahdi at the end of 2019. .