In Georgia, thousands of demonstrators demand the release of ex-president Saakashvili

Several tens of thousands of people demonstrated on Thursday in Georgia to demand the release of former President Mikheil Saakashvili, imprisoned since his return from exile in early October and in… 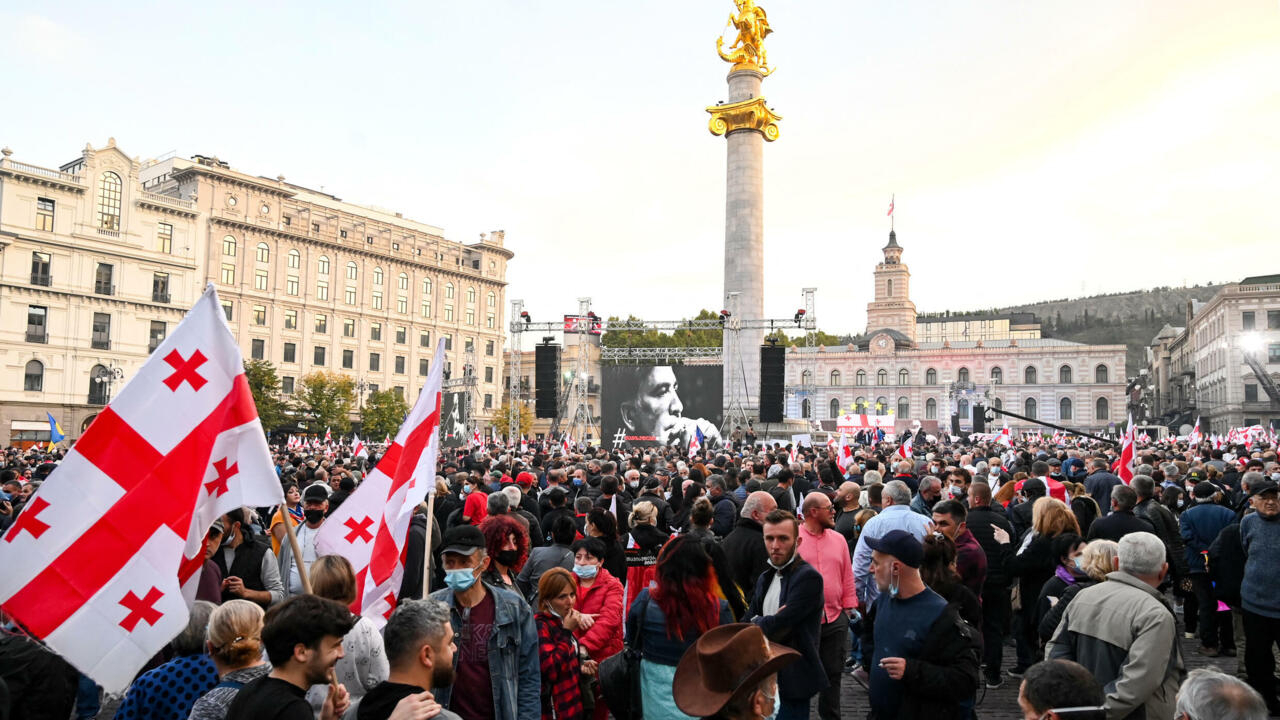 They are demanding the release of their former president.

Tens of thousands of people demonstrated, Thursday, October 14, in Georgia, to demand the release of former President Mikheil Saakashvili, imprisoned since his return from exile in early October and on hunger strike.

This Caucasian country has been experiencing a deep political crisis since controversial parliamentary elections in October 2020.

According to an estimate by an AFP correspondent, at least 50,000 people gathered in Freedom Square in the center of the capital Tbilisi, chanting the name of Mikheil Saakashvili and waving flags of Georgia.

In a message read to demonstrators by his lawyer, Mikheïl Saakachvili called for making his country "a beacon of democracy" and "saving Georgia through national unity and reconciliation".

President of Georgia between 2004 and 2013, Mikheïl Saakashvili, 53, was arrested on October 1 on his return from an eight-year exile in order to serve a six-year prison sentence for "abuse of power".

The flamboyant ex-president, now leader of the opposition, rejects this condemnation which he considers political and says he has started a hunger strike to protest against his imprisonment.

Doctors have expressed concern about his state of health.

His imprisonment is part of the political crisis that has shaken Georgia since the last legislative elections, narrowly won by the party in power, Georgian Dream, founded by billionaire Bidzina Ivanishvili, the great rival of Mikheïl Saakachvili.

"Free Saakashvili!", "No to political persecution!", Could be read on the banners waved by the demonstrators in Tbilisi, who also bore portraits of the former head of state.

Throughout the day, vehicles forming convoys had brought demonstrators to Tbilisi who gathered at the call of Mikheil Saakashvili and his supporters, according to images broadcast by television channels.

The former president, a charismatic personality as much adulated as criticized, had returned secretly to Georgia in early October, on the eve of crucial municipal elections for power.

The vote was ultimately won by the ruling party with 46.7% of the vote, against 30.6% in Mikheïl Saakashvili's United National Movement (MNU).

The various opposition parties, however, gathered together 53% of the vote and denounced massive fraud.

"To serve all your sentence"

In the main cities, including Tbilisi, second rounds will take place on October 30 between candidates of power and the MNU.

As a sign of concern over the arrest of Mikheil Saakashvili, the United States last week called on Tbilisi to ensure that the opponent "receives fair treatment, in accordance with Georgian law and international commitments of Georgia in human rights ".

Mikheïl Saakachvili was stripped of his Georgian nationality and has had a Ukrainian passport since 2016. Before returning to his native country, he lived for several years in Ukraine where he was given official functions.

But the Georgian government has so far shown its firmness in this regard.

Prime Minister Irakli Garibachvili thus blurted out last week: "no one on Earth is able to convince us to release Saakachvili", who will "serve all his sentence".

"He had better behave (in prison), otherwise we will initiate new prosecutions," warned the Prime Minister.