After clashes in the heart of Beirut..the army arrests 9 people and the government announces mourning for the lives of the victims

The Lebanese army announced the arrest of 9 people against the backdrop of the clashes that took place in the capital, Beirut, which left 6 people dead and 33 wounded, at a time when Lebanese Prime Minister Najib Mikati said that tomorrow Friday will be a day of mourning. 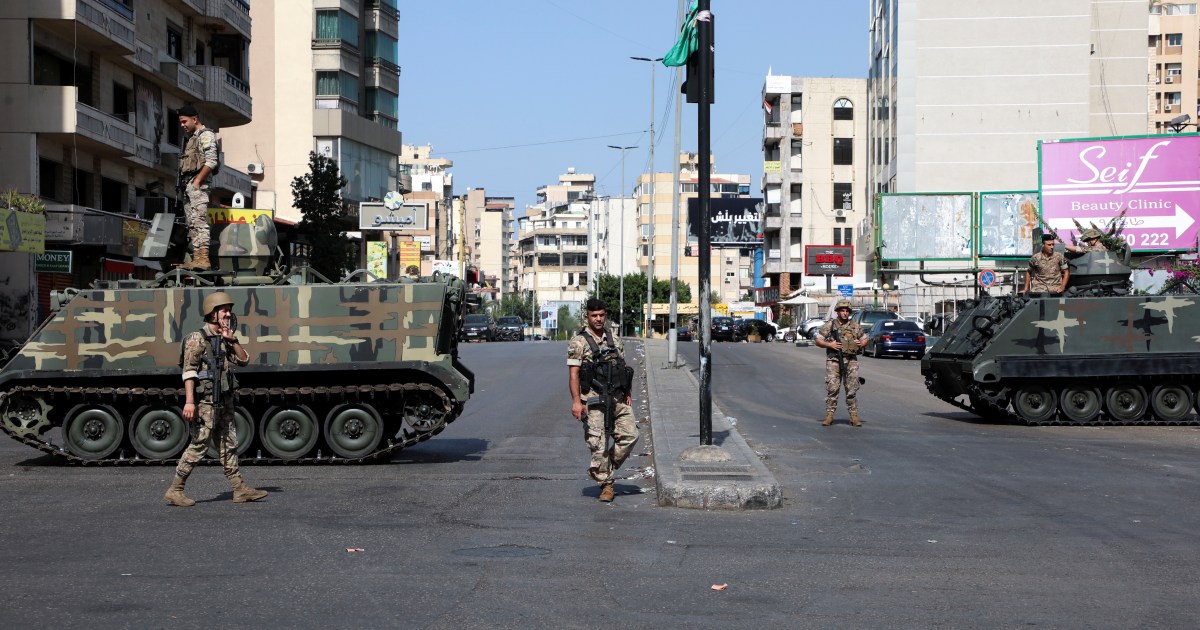 On Thursday, the Lebanese army announced the arrest of 9 people in connection with the clashes that took place in the capital, Beirut, which left 6 people dead and 33 wounded, at a time when Lebanese Prime Minister Najib Mikati said that Friday will be a day of mourning for the lives of the victims.

The army added - in a statement - that it immediately reinforced its deployment in the area and the conduct of patrols, and raided a number of places in search of the shooters, and arrested 9 people from both sides (without naming), including a Syrian.

The statement pointed out that the army command reiterates that it will not tolerate any militant, while army units continue to deploy in the area to prevent renewed clashes.

The memorandum of the Prime Minister's Media Office said, "Tomorrow, Friday, October 15, is announced as a general closure of mourning for the souls of the martyrs who fell as a result of today's events."

The memo added that all departments, public institutions, municipalities, public and private schools will be closed.

Earlier today, Thursday, armed confrontations took place - in which light machine guns and RPGs were used - in the Tayouneh area, which is located between the Shiite-majority district of Chiyah and the Christian-majority Ain al-Rummaneh area - and these confrontations lasted for about 5 hours, despite the spread of the virus. The Lebanese army is in the area.

The events began with heavy gunfire during a demonstration organized by supporters of the "Hezbollah" and "Amal" movement (Shiites) to denounce the decisions of the judicial investigator in the case of the Beirut port explosion, Judge Tariq Bitar.

And Lebanese media reported - today, Thursday - that many streets in and around the clashes area in Beirut are witnessing a massive exodus of residents for fear of an escalation of tension again.

She said that this comes amid material losses in homes, shops and cars, many of which were destroyed as a result of the clashes in the areas of Furn Al Chebbak, Badaro, Ain Al-Remmaneh and Chiyah in Beirut.

In statements shortly after the incident, Lebanese Interior Minister Bassam Mawlawi said that "the demonstrators emphasized the peacefulness of their movement, and there are those who started shooting and the investigation will expose them," adding, "We will ask the government to take everything necessary to control the security situation in the areas of Chiyah and Ain al-Rummaneh."

Moloy stressed that the government to which he belongs "is for salvation and work, and is not the one who is sabotaging the situation in the country."

In a joint statement, Hezbollah and the Amal Movement accused armed groups affiliated with the Lebanese Forces Party led by Samir Geagea of ​​killing and wounding their supporters during the demonstration, which the latter denied and described the accusations as "false."

Hezbollah and the Amal movement said that gunmen affiliated with the Lebanese Forces party shot protesters from rooftops in Beirut, shooting them in the head, in an attack that the party and the movement said was aimed at "dragging the country into sedition."

In a joint statement, they called on the army to intervene quickly to arrest those responsible for what happened, and called on their supporters to calm down.

On the other hand, the head of the Lebanese Forces Party, Samir Geagea, said that "the main reason for the events in Beirut is the uncontrolled weapons that threaten citizens at all times and places."

In a statement, Geagea denounced the clashes in Beirut, calling for full investigations to be conducted to determine the responsibilities for what happened.

For his part, former Prime Minister Saad Hariri said that "what happened today in Beirut in terms of shooting and shelling is unacceptable by all standards."

Hariri also called on the army and security forces to take maximum measures and measures to prevent all forms of shooting, arrest gunmen, and maintain civil peace.

For his part, the Free Patriotic Movement - led by former Foreign Minister Gebran Bassil - said that what happened in Beirut was an armed attack on people who wanted to express their opinion, even if the movement did not agree with them.

The current stressed - in a statement - that questioning the work of the judicial investigator in the explosion of the Beirut port is not caused by threats and intimidation in the media and the street.

Aoun said that he had made contacts with the concerned parties to address what happened, and he would not allow anyone to take the country hostage for its interests and accounts.

He added - in a televised speech - that an investigation will be conducted into what happened to hold those responsible and instigators accountable.

Lebanese Prime Minister Najib Mikati said - in a press interview in Beirut - that things have returned to normal and that the army has reported an improvement in the security situation on the street.

Mikati apologized to the Lebanese for what happened Thursday, stressing that the only solution in Lebanon is dialogue, and we must work to solve the citizens' daily problems.

He added that the government is committed to holding the elections within the constitutional deadlines despite the discouraging violence in Beirut today.

Mikati stressed that the government is an executive authority and cannot interfere in the work of the judiciary, stressing that he remains in the government to address the issue of the investigation into the explosion in the port of Beirut.

The Court of Cassation in Lebanon rejected the request to disqualify Judge Tariq Al-Bitar, the judicial investigator in the Beirut port explosion case, which would allow him to resume his work.

The former Minister of Finance, Ali Hassan Khalil, and the former Minister of Works, Ghazi Zuaiter, had submitted a second request to the court to disqualify the investigator from the case, given that the Supreme Council for the Trial of Presidents and Ministers is the reference for their trial.

Al-Bitar had suspended the investigation sessions until the Court of Cassation decided on the request to disqualify him.

It is noteworthy that the judge had previously issued two arrest warrants against former Finance Minister Ali Hassan Khalil and former Minister of Works Youssef Fenianos, and a summons against former Prime Minister Hassan Diab.