North Korean leader Kim Jong Un has accused the United States of being the "root cause" of tensions on the Korean peninsula, according to state media. He said during the opening of an exhibition dedicated to defense in Pyongyang the day before yesterday, that there was no reason for him to "believe that it is - the United States." 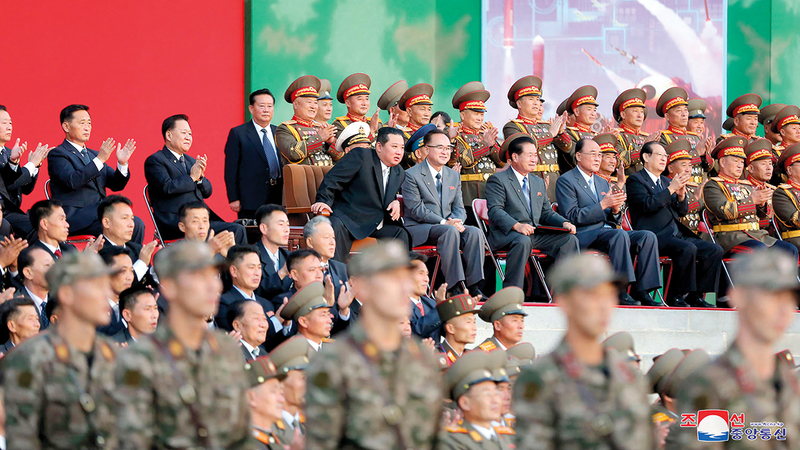 Washington described the "root cause" of tensions on the Korean peninsula

North Korean leader Kim Jong Un has accused the United States of being the "root cause" of tensions on the Korean peninsula, according to state media.

He said during the opening of an exhibition dedicated to defense in Pyongyang the day before yesterday, that there is no reason for him to "believe that it - the United States - is not hostile" towards his country, despite its recent calls for dialogue.

Washington has repeatedly called on Pyongyang for dialogue and has repeatedly denied any hostile intentions towards the Kim regime, but the North Korean leader expressed this on Monday, saying, "I am very curious to know whether there are people or countries that believe this."

The North Korean leader stressed that the actions of the United States contradict its statements in this regard.

"There is nothing in her actions to say that she is not hostile," he said in comments reported by the official KCNA news agency.

Pictures published by state media showed Kim standing during the exhibition in front of the intercontinental ballistic missile that Pyongyang unveiled last year during a military parade.

In another photo, he appeared sitting smoking with senior officials and officers, while giant posters showing the North Korean leader in military uniform were hung in the exhibition hall.

The North Korean leader's speech comes after his country has tested highly advanced missiles in recent weeks, including a long-range cruise missile, a hypersonic glide missile and an anti-aircraft missile.

In 2018, Kim Jong Un became the first North Korean leader to meet a US president who is still in power, but these talks remained stalled after the failure of a second summit with former US President Donald Trump in Hanoi in 2019 over the issue of easing international sanctions and concessions by Pyongyang in return.

The administration of US President Joe Biden has repeatedly announced its willingness to meet with North Korean officials at any place and time without preconditions, as part of efforts to denuclearize the Korean Peninsula, but Pyongyang refuses to do so.

Kim's speech at the exhibition aims to justify that North Korea's ballistic and nuclear programs are "part of the right to self-defense," according to Park Won-gu, a professor of North Korean studies at Ewha University and Man's University.

"North Korea organized this exhibition with the aim of claiming that its weapons programs are not different from those of other countries," this expert said in a statement to Agence France-Presse.

South Korea, an ally of the United States, enhanced its military capabilities by successfully testing the first submarine-launched ballistic missile on September 1, and by revealing a hypersonic cruise missile.

And last week, Pyongyang and Seoul restored the lines of communication between them, in an indication of improving relations in the last months of South Korean President Moon Jae-in's tenure in support of dialogue, but Kim accused Seoul of "reckless ambition" and "illogical and two-faced" behavior.

"Their frivolous and dangerous attempts to consolidate military power undermine the military balance on the Korean peninsula and increase instability and military dangers," he added.

Kim inaugurated the annual defense fair on the anniversary of the founding of the ruling Workers' Party. Flying and martial arts demonstrations were held for the occasion.

North Korea closed its borders last year to protect against the spread of the "Covid-19" epidemic, which first appeared in neighboring China, which is Pyongyang's main ally and partner in terms of trade and aid exchanges.

North Korea confirms that it has not recorded any infection with "Covid-19", but experts are skeptical about this.

A report by United Nations experts in early October confirmed that the regime is continuing its armament program despite the enormous economic difficulties the country is facing.

Pyongyang is subject to international sanctions over its nuclear and ballistic programs, which have made significant progress under Kim.

North Korea is prohibited by UN Security Council resolutions from developing its nuclear or ballistic arsenal, but it does not care about this ban, which has brought it back to multiple international sanctions.

North Korea has not yet shown any willingness to give up its arsenal, which it says it needs to defend itself against any attack by Washington, an ally of Seoul, which has 28,500 military personnel in South Korea to protect it from its northern neighbor.

• The North Korean leader asserted that he had no reason to “believe that the United States is not hostile” towards his country, despite its recent calls for dialogue.

• Kim Jong Un's speech at the exhibition aims to justify that North Korea's ballistic and nuclear programs are "part of the right of self-defense."