In the qualifiers for the 2022 World Cup, the Swiss join the Azzurri at the top of the group at an altitude of 14. Head to head in Rome on 12 November 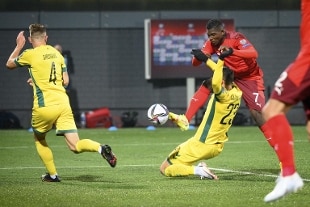 12 October 2021Easy success for Switzerland in Vilnius against Lithuania, on the eighth day of qualifying for the 2022 World Cup. by Steffen at 42 '. At the end of the fourth and last goal with Gavranović (94 ').

With this victory, Switzerland reaches Italy at 14 at the top of the Group C standings. However, despite tonight's goal, the Azzurri maintain the advantage of a better goal difference: +11 against +9, on the eve of the decisive match of 12 November at the Olimpico.

In the other match of the evening, Bulgaria defeated Northern Ireland 2-1 in Sofia: the guests took the lead in the 35th minute with Washington, but the hosts won with a brace from Nedelev in the second half, on the net at 53 'and 63'.