A new diesel-electric submarine "Magadan" entered the Pacific Fleet of the Russian Navy. Until 2024, the Pacific Fleet will receive six Project 636.3 submarines. These submarines are among the quietest in the world and are nicknamed "Black Hole" in NATO countries. Experts note that in terms of combat characteristics and a number of parameters, they surpass almost all non-nuclear submarines that are used in the Pacific region. 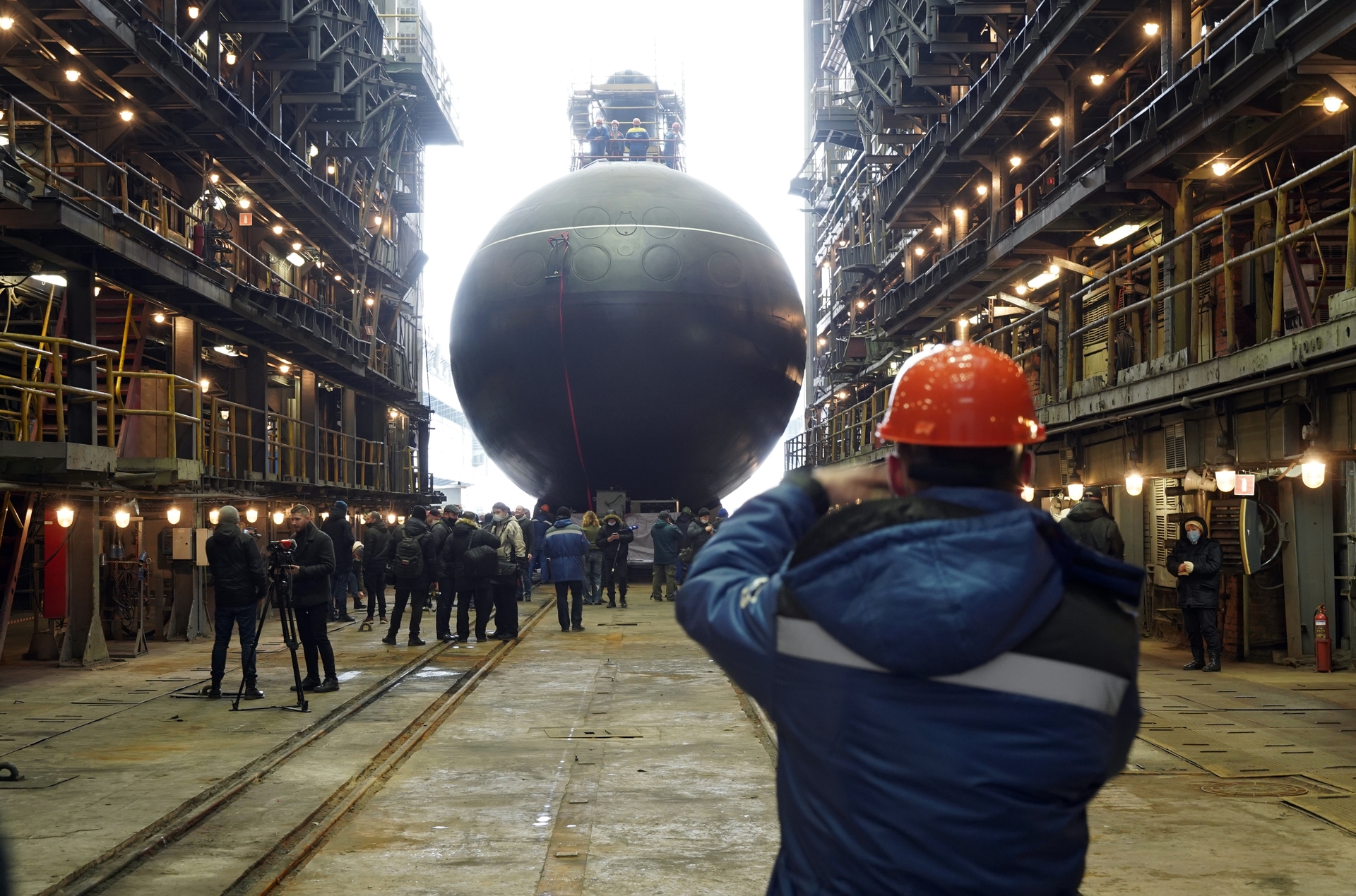 On Tuesday, October 12, a solemn ceremony was held in St. Petersburg to transfer the diesel-electric submarine Magadan of project 636.3 Varshavyanka to the Russian Navy.

Rear Admiral Mikhail Neupokoev, Acting Chief of the Main Staff of the Navy, took part in the ceremony of raising the Andreevsky flag on the ship.

“Today there is another replenishment in the Navy.

We are taking on a state-of-the-art combat ship, the large diesel-electric submarine Magadan.

The ship and its crew have a lot of things to do before it enters its native harbor - Vladivostok: working out and passing the full course of combat training tasks, entering the combat-ready forces of the Navy, "- said in the appeal of the Commander-in-Chief of the Navy, Admiral Nikolai Evmenov, which was announced Neupokoev.

The Magadan is the third submarine of this series built at the Admiralty Branches for the Pacific Fleet.

The contract for the construction of six submarines of the modernized project 636.3 "Varshavyanka" for the Pacific Fleet was signed in September 2016.

The first submarine "Petropavlovsk-Kamchatsky" was handed over to the customer in November 2019.

A month later, the second submarine of this series, the Volkhov, was launched and entered the fleet in October 2020.

The submarine "Magadan" was laid down on November 1, 2019 and launched in March this year.

Now on the fourth submarine "Ufa" the formation of a light hull and installation work, installation of an acoustic coating is underway.

The submarines Mozhaisk and Yakutsk were laid down at the Admiralty Shipyards in August 2021.

The Russian Navy plans to receive all six submarines of the Varshavyanka project for the Pacific Fleet by 2024.

Project 636.3 Varshavyanka submarines are an improved version of Project 877 Halibut multipurpose diesel-electric submarines (Kilo in NATO classification) developed in the USSR in the late 1970s.

Its name "Varshavyanka" received from the export version of the "Halibut" project, the submarines of which were supposed to be supplied to the countries of the Warsaw Pact.

In the 1990s and 2000s, simplified modifications of the Varshavyanka were exported to China, India, Algeria and Vietnam.

The submarines of this project belong to the third generation of large diesel-electric submarines.

Their length is almost 74 m, their underwater displacement is 3950 tons.

The maximum diving depth is 300 m. The Varshavyanka submarines are equipped with a diesel-electric installation: a rowing electric motor with a capacity of about 5.5 thousand liters.

and two diesel generators 30DG with a capacity of 1500 kW each.

The submarine can reach a surface speed of up to 17 knots and an underwater speed of 20 knots.

The autonomy of the "Varshavyanka" is 45 days.

Without surfacing, it can cover 400 nautical miles.

The submarine has a crew of 52 people.

The Ministry of Defense of the Russian Federation notes that the submarines of the modified project 636 have a higher combat effectiveness compared to previous projects.

"The world priority of ships of this class in the field of non-nuclear submarine building is provided by the optimal combination of acoustic stealth and target detection range, the latest inertial navigation system, a modern automated information control system, powerful high-speed torpedo-missile weapons," the defense ministry noted.

They have low radar signature and, due to flight at ultra-low altitudes, can effectively avoid detection by air defense systems.

In 2015, a Project 636.3 submarine equipped with these missiles underwent baptism of fire in Syria.

The submarine "Rostov-on-Don" struck with "Calibers" on the positions of terrorists in the province of Raqqa.

These were the first missile strikes in the history of the Russian submarine fleet in real combat conditions.

In addition to missiles, the boat is equipped with an ammunition load of 18 torpedoes or 24 mines - six 533-mm torpedo tubes are located in its bow.

One of the main advantages and distinctive characteristics of "Varshavyanka", according to experts, is their high secrecy.

In the construction of boats, noise-absorbing elements and modern means of reducing the level of own noise to the natural background of the ocean are used.

Low visibility, analysts say, allows Project 636.3 submarines to implement the concept of preemptive detection: the Varshavyanka can spot an enemy ship and suddenly attack it with anti-ship missiles from a distance exceeding its own detection threshold.

This feature did not go unnoticed in the Western expert community - in NATO countries these submarines received the nickname "Black Hole" (Improved Kilo in the official classification of the alliance).

The high secrecy rates of the Varshavyankas, in particular, were noted by the American military-political portal The National Interest in its article “Kilo Class: Russian Submarine“ Black Hole ”.

“The Improved Kilo, nicknamed“ Black Hole ”by the US Navy, is extremely silent.

The manufacture of devices of this class has been going on more or less continuously for thirty years now, which indicates their effectiveness in the naval environment, ”the newspaper notes.

According to military expert Alexei Leonkov, the main purpose of Project 636.3 submarines is to carry out combat missions in the near sea zone.

At the same time, equipping with cruise missiles allows striking both targets on the coast and ships of a potential enemy.

“This boat is universal - it can fight ships, submarines, as well as support, for example, the landing of ground troops on the beachhead by strikes of the Kalibr cruise missiles,” the expert noted.

Leonkov stressed that such capabilities have already been convincingly demonstrated by the submarine of this series "Rostov-on-Don" in Syria.

At the same time, its main tactical advantage is stealth, added the interlocutor of RT.

“It has the ability to run so quietly that modern sonar stations cannot detect it when it is submerged.

In turn, the military expert Yuri Knutov noted that these boats will be in great demand at the Pacific sea frontier of Russia.

“We are not getting involved in an arms race, but are seeking an advantage through technology and improved strike weapons on submarines and ships.

This is extremely important and will allow our fleet to remain the strongest in the Asia-Pacific region, "said the interlocutor of RT.

A complete series of these submarines is needed by the Pacific Fleet to contain the Japanese and American naval forces in the region, Knutov added.

“In terms of its combat characteristics and a number of parameters, striking power and armament, Varshavyanka surpasses almost all non-nuclear submarines used by the maritime powers in this region,” the expert concluded.