Boxing / Heavy: Fury still defeats Wilder after one of the biggest fights in history - France 24

Boxing / Heavy: Fury still defeats Wilder after one of the greatest fights in history Las Vegas (United States) (AFP) Fight of the year and already one of the greatest in heavyweight history: Tyson Fury fell twice, but he knocked out Deontay Wilder three times, retaining his WBC heavyweight belt, by knockout at 11th round. At the end of a daunting clash, which will go down in boxing annals, yet another Briton's right hook - there were so many that they were no longer counted at t 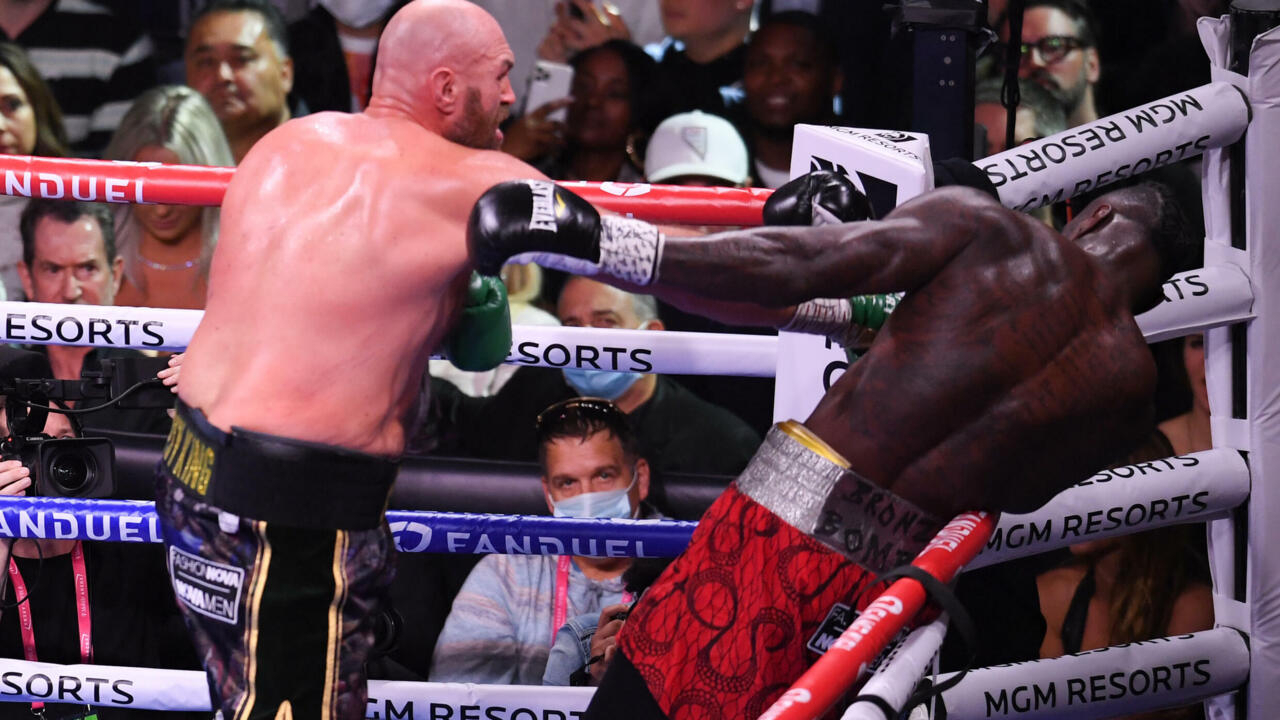 Fight of the year and already one of the greatest in heavyweight history: Tyson Fury fell twice, but he knocked out Deontay Wilder three times, retaining his WBC heavyweight belt, by knockout at 11th round.

At the end of a daunting clash, which will go down in boxing annals, yet another Briton's right hook - there were so many that they were no longer counted at this stage - got the better of the American, that we felt more and more tested, with an insane courage to remain still standing in the ring of the T-Mobile Arena of Las Vegas.

Thus Fury, 33 years old and still undefeated in 32 fights (1 draw), once again dominated Wilder for their third clash in almost three years, after the draw that separated them in December 2018 and his resounding victory in February 2020, which allowed him to snatch the champion's belt.

And this time, he won by having been pushed to his limits, like never before.

Arrived in a centurion's costume, with a red crested helmet on the leader, the Mancunien was the first to really hurt, by placing, already, a right hook on the ear of his rival, then an uppercut on the left. that brought down Wilder.

Bis repetita of the previous fight during which he made the difference on the same type of sequence before finishing after seven rounds?

Because, Wilder, who had made his debut wearing a red fur coat and a mask of Nigerian inspiration, quickly found the resources to do what he does best in the world, from the resumption next: place his lightning right.

American Deontay Wilder (from behind) and Briton Tyson Fury, during their fight for the WBC heavyweight title in Las Vegas, October 9, 2021 Robyn Beck AFP

Fury took it full head and it must have turned terribly inside because he ended up on the mat.

Then a second time, after a hook on the back of the neck which sent him forward, before being saved by the gong.

But Fury, who had already fallen twice in 2018 and got up each time, did it again before attacking with more force.

The following rounds, he dominated them by placing his combinations left right, and Wilder seemed more and more exhausted, even if he never refused blow for blow.

In the 10th round, Fury returned Wilder to the ground, again from his right hook to the temple.

With the energy of desperation, in a near daze, Wilder replied and rocked the Briton, who was standing on the ropes and telling him with the glove hitting his own head "go on, hit again".

A "Rocky" fight, but better and for real!

It was finally in this 11th round that he was able to finish the job, Wilder's terrible fall face down leaving no room for doubt.

In the end, although having never been so heavy in a ring (125.6 kg, or 17.7 kg more than Wilder and his 107.9 kg), instilling doubt about his state of form the day before during The weigh-in, Fury flaunted flamboyant and roughly effective boxing.

Because the lesson of what has been seen in the ring is that his preparation, weighed down by the Covid-19 he contracted this summer, resulting in a postponement of the fight, will have been solely focused on power, in the service of a technique that we already knew superior to that of the American. Fury had also announced the color by promising to send Wilder to the ground "as if he took a 36 tons in the buffet".

Strategy paying off, under the eyes of some VIPs like the former stars of the NBA Magic Johnson and Shaquille O'Neal.

All in front of 15,820 spectators in "Fury", despite the notable absence of the usual strong British colony, which rushes to Las Vegas to follow its exploits, but was deprived of it because the United States will not reopen its borders to travelers. vaccinated against Covid-19 until early November.

Fury can now look to a potential title unification against Ukraine's Oleksandr Usyk, who created a huge surprise last month when he unanimously defeated Anthony Joshua to grab the WBA, WBO and IBF belts.

Unless a revenge takes place before between these two boxers.

So much so that the question of his future as a professional boxer arises.