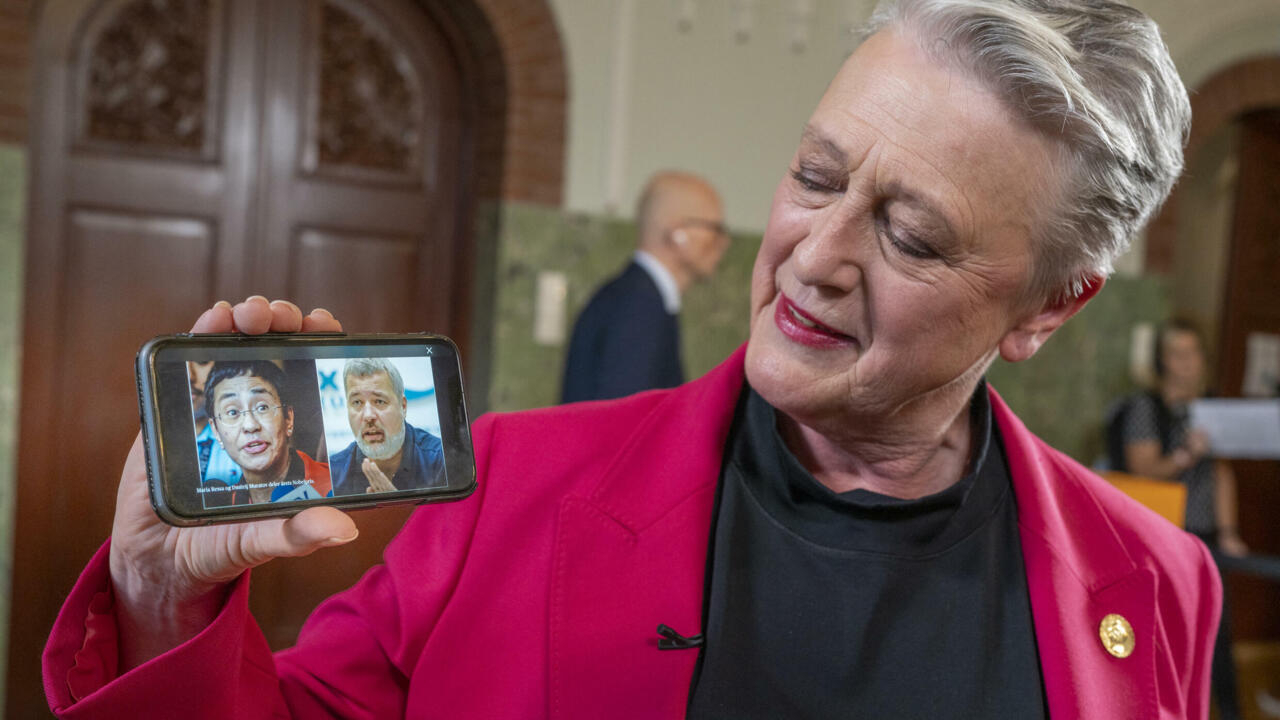 58-year-old Maria Ressa co-founded the investigative journalism digital platform Rappler in 2012, a medium that shone the spotlight on the violence accompanying the anti-drug campaign initiated by Philippine President Rodrigo Duterte.

"The death toll is so high that the campaign looks like a war waged against the population itself," argued the Nobel committee.

Also of American nationality, Ms. Ressa was convicted in June of defamation but released on bail in a case where she faces up to six years in prison.

"A world without facts means a world without truth and without trust," the former CNN reporter said on Rappler, a platform which the Nobel committee said "has also documented how social media is used to spread false information. , harass opponents and manipulate public debate ".

One year his senior, Dmitry Muratov is one of the co-founders and editor-in-chief of the newspaper Novaïa Gazeta, one of the few still independent voices in Russia.

The medium was created in 1993 with the help of Mikhail Gorbachev who had placed part of the money received when he himself had won the Nobel three years earlier.

Novaïa Gazeta has, as the committee underlined, brought to light "corruption, police violence, illegal arrests, electoral fraud and + troll farms +" and paid a heavy price for it: six of its journalists lost their lives, including Anna Politkovskaya, killed almost 15 years ago to the day.

Dmitri Muratov dedicated his prize to them: "It is not my personal merit. It is that of Novaya Gazeta. It is that of those who died defending people's right to freedom of expression".

The Kremlin, he hailed the "courage" and the "talent" of the journalist.

In a world where, as the saying goes, "the first victim of war is the truth", this is the first Nobel Peace Prize winner in 120 years of history to reward the freedom of information as such, one "of the essential preconditions for democracy" according to the Nobel committee.

According to the latest Reporters Without Borders (RSF) ranking, the press freedom situation is problematic, difficult, even very serious in nearly three-quarters (73%) of the 180 countries assessed.

A disastrous counter kept by the association shows that 24 professional journalists have been killed since the beginning of the year and 350 others are still imprisoned.

This award is "a call to action", responded RSF Secretary General Christophe Deloire.

The Committee to Protect Journalists (CPJ), another front-runner, paid tribute to two "incredible reporters ... at a time when the press faces growing threats around the world."

From Saudi journalist Jamal Khashoggi, killed in his country's consulate in Istanbul, to pro-democracy newspaper Apple Daily, forced to close this year in Hong Kong, attempts at muzzling abound.

If information is systematically targeted in authoritarian regimes and on battlefields, public debate in countries at peace is also parasitized by "infox".

On the occasion of the Covid pandemic, the World Health Organization was concerned from the start of 2020 about the "infodemic".

With its armies of "trolls" on social networks, Russia is regularly singled out for its attempts to interfere in elections in the United States and elsewhere, which it denies.

Under the presidency of Donald Trump, the United States itself lived to the rhythm of "fake news" criticized but also propagated by the billionaire.

"Without freedom of speech and freedom of the press", concluded Ms. Reiss-Andersen, "it will be difficult to succeed in promoting brotherhood among nations, disarmament and a better world".