Proposal: The Gaming Act will be applied to more online games

How to better access unlicensed gaming and match-fixing? Investigator Gunnar Larsson, together with Minister of Social Insurance Ardalan Shekarabi (S), presented several new measures on the subject on Wednesday afternoon. - These are concrete proposals, proposals that have been called for by many, says Shekarabi. 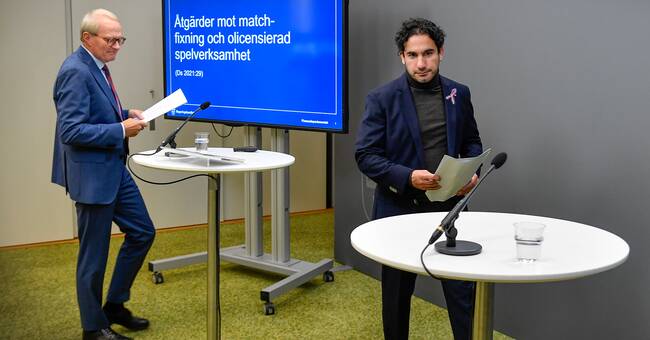 On Wednesday, the investigator Gunnar Larsson presented a number of proposals, with the intention of solving the problems with match-fixing and strengthening the work against unlicensed gaming, ie gaming from companies that do not have a license to conduct business in Sweden.

When it comes to illegal gambling, it is proposed that the Gambling Act, unlike today, should be applied to all online gamblers who are in the country and have the opportunity to participate in a gambling game.

- We propose a fundamental change out of the gaming law's own area of ​​application, and it is quite intrusive, says Gunnar Larsson.

"More cases can be detected"

There were also many suggestions when it comes to strengthening the work against match-fixing:

- Our opinion is that what we propose will contribute to more cases of match-fixing being discovered.

We also believe that the gaming companies to an increased extent can stop gaming themselves, says Gunnar Larsson.

Recently, for resource reasons, the police decided to pause the special group working against sports-related crime, something the responsible minister was asked about at the press conference.

With today's data, we have the opportunity to intensify the work, both in terms of government control and coordination between the authorities, and we intend to do what is necessary for us to have a more efficient job, says Ardalan Shekarabi.