Along the US-Mexico border, the recent arrival of nearly 15,000 people has triggered a new humanitarian crisis 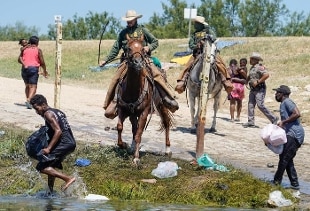 September 28, 2021 - Texas Governor, Republican Greg Abbot, said if the US Department of Homeland Security fires the mounted border police officers who whipped Haitian migrants on the Mexican border, it will hire them. After the images of officers on horseback loading a group of migrants, the Department opened an internal investigation into their conduct, and President Joe Biden called their actions "outrageous".

In the videos, which have gone viral on social networks, an agent can be heard screaming, while he almost overwhelms, with his horse, a man on the river bank: “Do you use your women to pass? That's why your country is shit ”.

Along the US-Mexico border, the recent arrival of nearly 15,000 people has triggered a new humanitarian crisis. Biden must walk the line between respect for human rights and control of entry into the US, compliance with electoral commitments and attention to public opinion. On the video, his spokesperson, Jen Psaki, is drastic: "I've seen some images, I don't have the full context, but I can't imagine what context would make them appropriate." "I promise you, those people will pay," the White House tenant told reporters.

Abbott instead defended the agents, saying, "If they risk losing their jobs due to a president abandoning his duty to protect the border, they have a job in the state of Texas. I will hire you to help protect our border." .