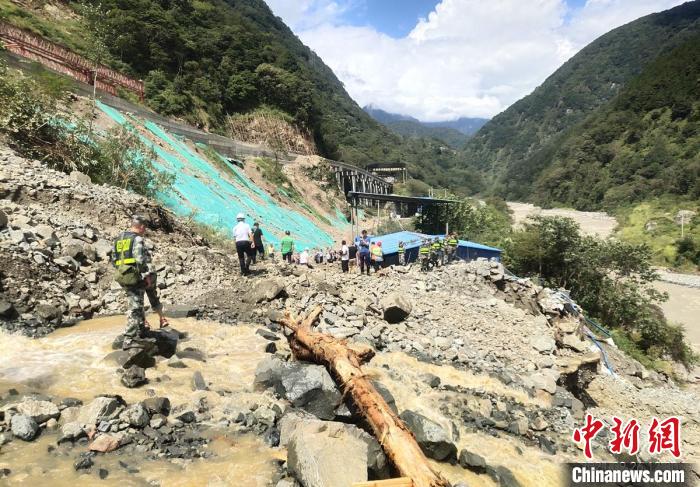 In the early morning of the 26th, heavy rains induced a blocking-type flash flood disaster, causing 62 people in the second bid section of the inundated and rebuilt road project in the reservoir area of ​​the Guolangqiao Hydropower Station in Labahe Town, Tianquan County, to be trapped, and the on-site traffic roads, electricity, and satellite communications were interrupted.

The local party committee and government quickly organized the first round of rescue. 45 trapped people were successfully transferred and evacuated to a safe area, and they tried their best to search and rescue 17 missing persons.

Among them, 2 people died and 3 people were evacuated to a safe area (2 people were slightly injured, 1 person was uninjured).

The mountain torrent destroyed the highway.

At the same time, it quickly organized emergency rescue, armed police, fire, medical, public security and other professional search and rescue forces, coordinated life detectors, three-dimensional mapping instruments, unmanned aerial vehicles, satellite portable stations, helicopters and other equipment to the scene, and went all out to restore roads, communications, and electricity. A total of more than 700 rescue workers in 14 teams and more than 70 machines and vehicles have been put into search and rescue operations for other infrastructures.

At present, all roads and communications have been rushed through, and 695 power outage users in Tianquan County have resumed power supply.

An injured and trapped person was rescued.

In addition, public security officers have been arranged to patrol on duty 24 hours a day to ensure that no people return or stay within the danger zone, and do a good job in appeasement and aftercare of the relatives of missing persons.

At the same time, do a good job in the placement of evacuees, so that "unsafe must evacuate, and unsafe will not return."

Meteorology, natural resources and other departments will do a good job of 2-hour rolling weather forecast and geological disaster monitoring and early warning, and timely issue geological disasters and meteorological risk warnings to avoid new casualties caused by secondary disasters.

The cadres of the village team in Labahe Town carried out a comprehensive investigation of the hidden dangers of earth disasters and mountain torrents, and reported and handled dangerous situations in a timely manner.

Set up safety observation posts for road sections and areas where dangers cannot be eliminated in time, and organize the masses to take the initiative to avoid them.

Fire rescue personnel carried a rescued person out to a safe place.

According to the report, the front command center is rushing to grasp the 72-hour golden rescue period, coordinating the rescue and rescue forces of all parties, carrying out a dragnet-style, full-coverage search and rescue investigation of the disaster-stricken area, and doing everything possible to search and rescue the trapped people against time to ensure that "no one is missed." , We will do our best to provide medical treatment for the injured, and do our utmost to reduce casualties.

At the same time, we will do a good job of scientific rescue, ensure the personal safety of rescuers, and properly arrange the transfer of personnel and the masses, carry out the investigation of hidden dangers by analogy, and be highly vigilant in disaster response and preparations.

At present, the on-site search and rescue work is still in full swing, and the investigation of the cause of the disaster has also begun.