Di Maio: "In favor of a new pact for recovery, citizens at the center"

"There are already quarrels between the parties, I would not like quarrels even between the social partners" said the Foreign Minister 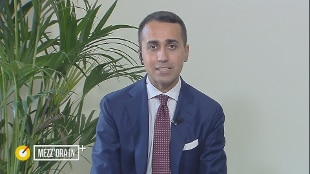 September 26, 2021 "There is a great expectation towards Italy, also testified by the economic data. We cannot disappoint you, and I believe that Draghi will not disappoint you because at the moment at the European tables Italy has a lot to say and can do a lot for all of Europe "especially with the departure of Angela Merkel in Germany. Foreign Minister Luigi Di Maio said this at 'half an hour more'.

"We have always supported it. If we want to carry out common European defense to face or put ourselves in opposition to the Americans, we practically let it be born dead, says Di Maio." The common European defense must be complementary to what is our strategic alliance, which is born and which can allow us, in the context of relations with our allies for values ​​and strategy, which are the United States, to be able to count all together more in the world. The theme is that today if Europe is stronger, he adds - the whole NATO and Euro-Atlantic alliance will be too ", but" if there are countries in Europe that are thinking of a common defense to replace or free themselves from NATO, they are completely wrong. Because it is the usual illusion of self-sufficiency which in a globalized and interconnected world is a 'always illusion. Let's remember the countries that closed their borders to Italy because it first entered the virus, then two weeks later all the heads of state were there to make speeches to the nation saying fairies like Italy ".

"Italy is a loyal ally of the Biden administration"

"What does America expect from Italy? The United States knows that Italy is one of the greatest European allies and above all with Biden, who gives greater impetus to multilateralism, the expectation it is the friendship and the ally of all time. Blinken called me to say that the trips from Italy to the USA are reopening, we work with an administration that considers us loyal allies ", declared the foreign minister.

Libya: "We need elections, no soldiers"

"After the pandemic it is clear that multilateralism is needed. It is an illusion to think that we are self-sufficient. Italian soldiers in Libya? We are in another phase. Today we do not need soldiers, but elections. If the people want them, we owe them to them. Some say it is a utopia, but at the level of multilateralism with the United Nations we are working to get to the elections "explains Di Maio.

"It is not possible to recognize this Taliban government, where there are 17 ministers on the terrorist lists, but it is possible to continue to help the Afghans", underlined the foreign minister, adding that as foreign ministers of the G20 we are decided to fight against terrorism, work for the protection of human rights and give humanitarian aid.

"Recognition of this Taliban government is impossible" @luigidimaio "as foreign ministers of the G20 we have decided to strengthen the fight against terrorism, work for human rights and always give aid to protect women" #mezzorainpiu @RaiTre pic.twitter. com / G1DqlHAcPV

"I think it is an excellent sign that the social partners, that Confindustria can try to build a pact for the future. I fully support this idea, it must be as inclusive as possible, but I don't think President Draghi ever intended that he could exclude anyone ", said the minister speaking of Italy. "It must keep the welfare of the country at the center, I would not want the dispute between the social partners, we must all row in the same direction", he added.

"I think a sentence must be respected, period".

This is how Di Maio responds to Lucia Annunziata about the sentence of the Court of Appeal of Palermo on the State-Mafia negotiation.

"If we politicians begin to comment on the sentences we go to ingest another state power," he continued.