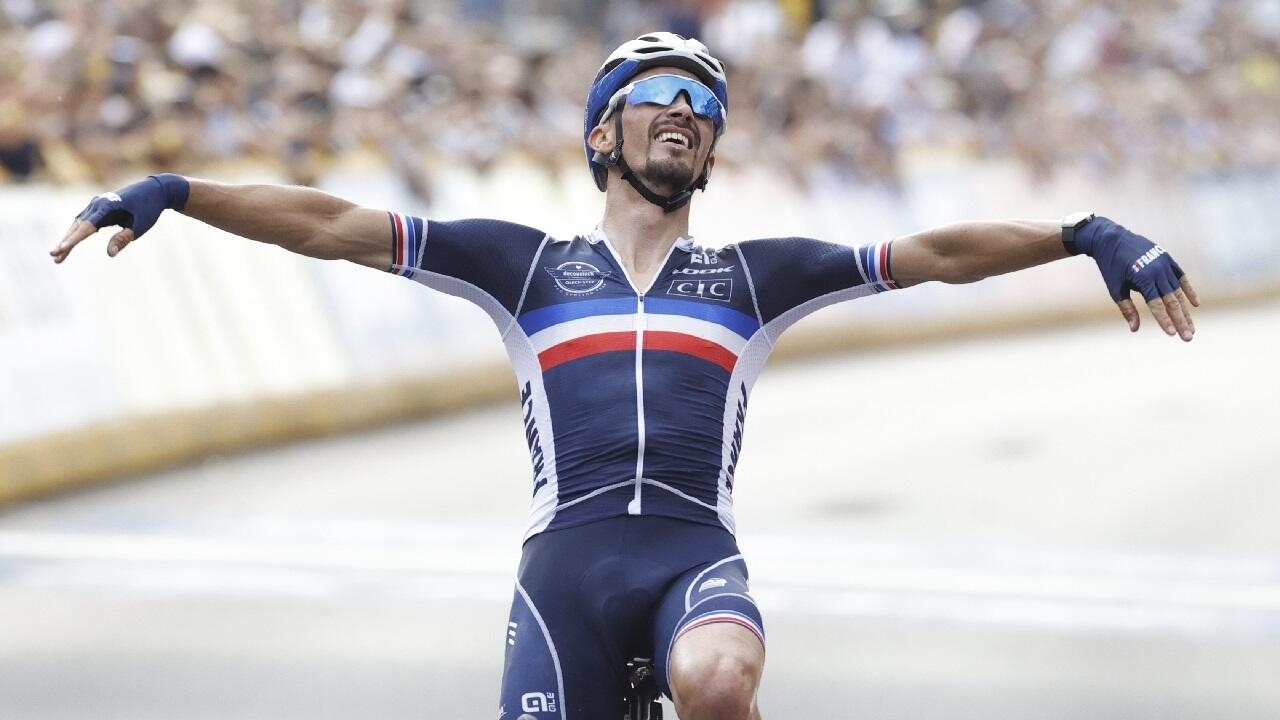 The French won his second consecutive road cycling world champion title on Sunday, September 26 in Belgium, between Antwerp and Leuven.

His attack 17 kilometers from the finish was decisive.

He is the first French runner to chain two coronations.

He knew he was expected and watched after his

in Italy. Reigning world champion Julian Alaphilippe landed in Belgium with the label of the man to beat. The Frenchman also had to deal with a tough contender for the coronation: Wout van Aert, very fit and supported by a public committed to his cause. But "Alaf", strong in his status, had no intention of leaving the Belgian or another his title. And whatever his last somewhat uncertain outings. “

We're not going to be content with just a waiting race. (...) I really feel better and better, I know I'll be there, I worked hard to be there,

Julian Alaphilippe did not break his word.

The 29-year-old Habs defied Belgian adversity and inflicted a stinging defeat on this long course of 268.3 kilometers, between Antwerp and Leuven.

In Flandrian land, the world champion, well supported by his French teammates, engulfed everyone.

A first attack by the French, 178 kilometers from the finish, hurt everyone.

A new offensive signed Alaphilippe, 58 kilometers from the finish, blasted the peloton.

Van Aert, but also the Slovenian

, double winner of the Tour de France, did not hold.

And finally, 17 kilometers from the finish, a final attack from Julian Alaphilippe settled the fate of the race. Alone, the Deceuninck-Quick Step rider crossed the finish line in 5 hours 56 minutes and 34 seconds, 32 seconds ahead of Dutchman Dylan van Baarle and Dane Michael Valgren. “

I arrived here really relaxed, with a lot of motivation and a certain kind of relaxation, the desire to do well. (...) The legs were good, I had worked well in recent weeks,

”the winner told France Télévisions, a few minutes after his arrival.

" the Belgian supporters, the light fly in the last kilometers while Wout Van Aert was won (he eventually finished 11th at 1'18 behind the winner), had "

the not very nice words

It really made me want to push even harder,

” he smiled, before stepping onto the podium and donning the rainbow jersey. The first French double title of world champion in road racing, can "Alaf" join the Slovakian Peter Sagan, the only man triple world champion (2015, 2016, 2017)? Answer in a year, in Australia. “