Folkfest is expected in Norway when the country opens up

Norway is counting down. At 16.00, most of the country's coronary restrictions will be released. - I think there are many nervous bartenders out there, says bartender André Sanchez to Norwegian VG. 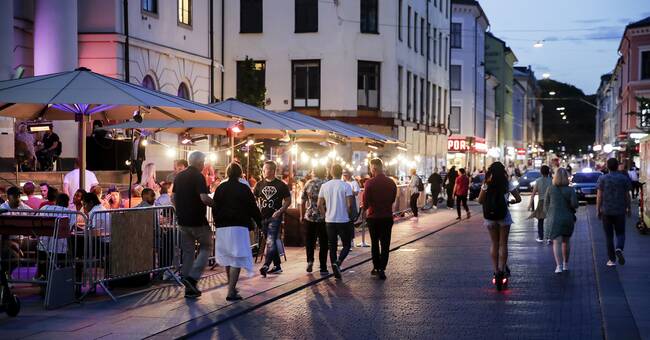 Norwegian media have spoken to several Norwegians who will go out and celebrate this afternoon.

- Finally we can be at bars and feel the joy of meeting people again.

It will be so wonderful, says musician Johnny Sandåker to NRK.

- I think there are many nervous bartenders out there, who have hardly talked to people in a year and a half, says André Sanchez to VG.

But there are also those who are both happy and worried.

- Maybe it can be a little too nice.

We actually have to keep in mind that there are many who may need to hold back a bit, says Arendal resident Maylinn Thon.

Quarantine for some unvaccinated Swedes

Norway's opening plan was presented on Friday and is referred to as "A normal everyday life with increased preparedness".

- The vast majority of municipalities feel that they have control over the situation, said the outgoing Prime Minister Erna Solberg during the press conference.

Among other things, the rule of keeping one meter away from other people will disappear, and there will also be no requirement for table service in restaurants and restaurants.

Entry quarantine for the unvaccinated is removed for travelers from areas designated as "orange", including Värmland.

However, Östergötland, Skåne, Gotland, Västra Götaland and the Stockholm area are still marked in red.

Unvaccinated people from these areas, who travel to Norway, will thus need to be quarantined for ten days.