Encarna Sánchez, her hazardous personal life and the dark reasons that made her leave Mexico

We are victims of our own circumstances. That phrase Encarna Sánchez knew well. On the one hand, his working life was the clearest example of meritocracy. Of girl... 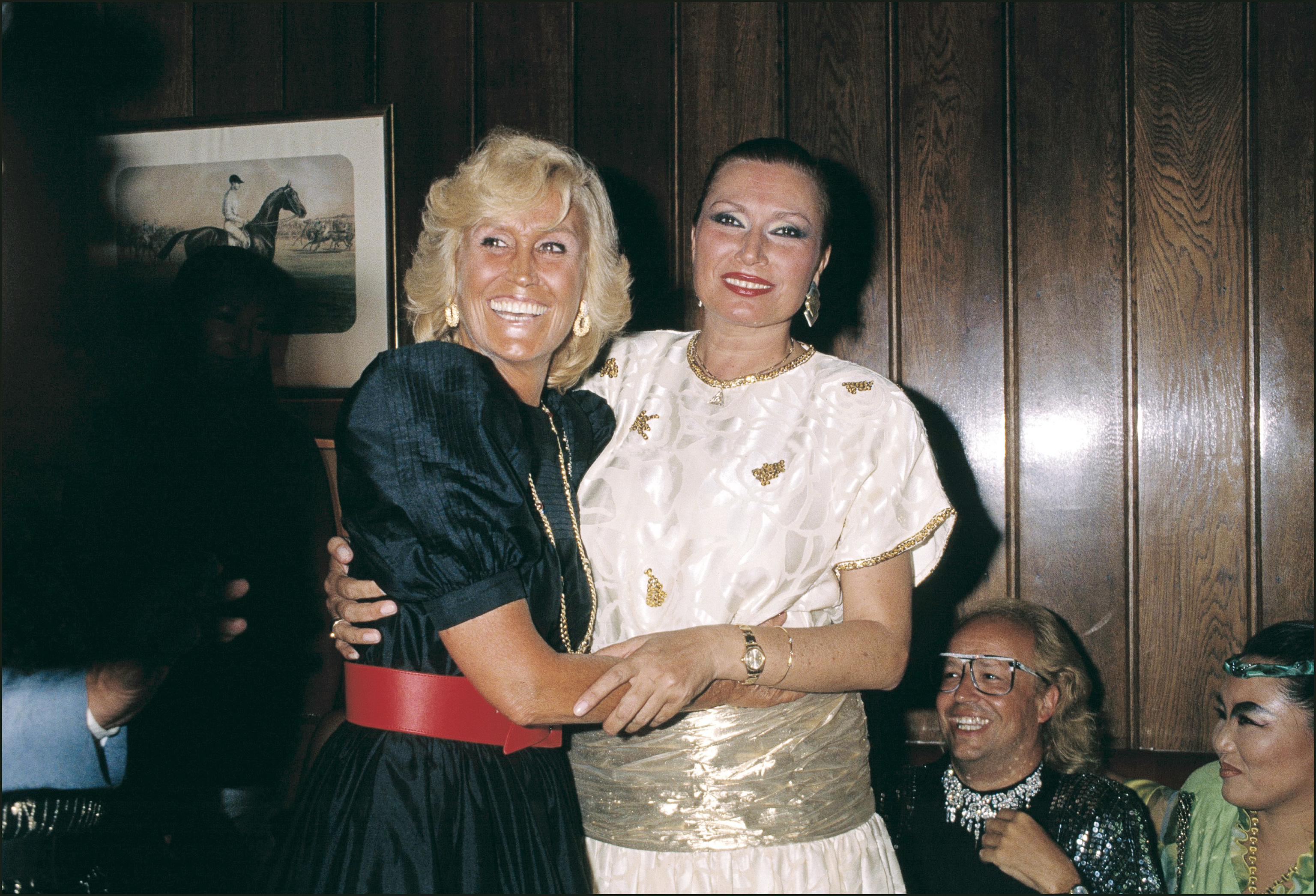 We are victims of our own circumstances. That phrase Encarna Sánchez knew well. On the one hand, his working life was the

. As a poor child, she had built a successful career on radio thanks to her talent and nothing else. No one doubts that. Now yes, Encarnita, she told herself. "You are the undisputed number one. You have done it." But his heart and soul, in a totally unconscious way, pointed to other goals. In its spartan hardness

through which the desire to love and, above all, to be loved was creeping

. However, there was a problem. His feelings did not square with what his education or his time dictated. Being in love with Rocío Jurado or her close relationship with Isabel Pantoja could destroy all that she had cost so much to achieve. She tried to keep her feelings deep inside her. So deep, they pricked his heart. As Federico Jiménez Losantos says,

His personal life has been the subject of much speculation. The strange robbery that he suffered in his house in La Moraleja in the last years of his life, that will in which he bequeathed all his assets to an old sentimental partner ...

Encarna left surrounded by mystery and, above all, fear

. Both own and exercised to others. That is why, to this day, many still do not comment on their lives. But newspaper archives and archives speak of the living and also of the dead. The book

(Almuzara), written by the journalist and co-author of this article Juanele Zafra, collects hours of recordings, interviews and publications that validate the comments, feelings and actions of the characters who star in this non-fiction novel .

For example, what happened in Mexico?

At the peak of her career, Encarna packs a suitcase and migrates to the land of Montezuma.

The theories are diverse.

Others would point to political pressure

elucidates her own theory.

At that time, the journalist presented

CS and have a good trip

The program used to help those most in need and that role Encarna moved her away from the radio with the organization of charity parties.

In one of them, money from the collection disappeared.

It was not the first time.

, a benefactor of the journalist at the time, would directly point to Encarna as the culprit and, to cover up the scandal,

would force her to leave the country

Encarna Sánchez and Rocío Jurado, in a promotional event in Madrid.EM

The truth about the conversation between the two remains within the walls of the Palacio del Pardo, but the truth is that

Encarna did not return to Spain until Franco died

His passage through Mexico also left several black legends, some collected in the book.

"They heard that Encarna had a

relationship with a minor

, named Monica, who was the

daughter of a government minister. The hostess received a notice from the police telling him not frequented more to the young, but Encarna turned a

The To get her away from her little girl, her father would have sent her some hitmen

, although she was never attacked, "says one of them.

However, it is not necessary to go to Mexico to tell myths and legends of Encarna Sánchez.

Here in Spain there were more convoluted stories, like that one that their whims were those that faced Isabel Pantoja and Rocío Jurado.

The journalist never publicly admitted to being homosexual, but she did not close the door to the love of women. For this reason, when Rocío Jurado separated from Pedro Carrasco in 1989, the announcer

began a rapprochement in the form of friendship

. Then, he introduces what he believes to be his best weapon into the procession: the display of power. He

Rocío's house a white gold and diamond ring with an envelope whose inner note was of such a voltage that the Jury, blushing,

sent everything back, making a cobra in the distance

. Encarna understood that she had taken a wrong step. He couldn't afford it. If Rocío revealed Encarna's homosexuality in professional circles, it could reach the ears of the owners of COPE, the station where she worked.

After this incident, Encarna is enchanted with Isabel Pantoja.

Nail and flesh are made

The young woman is not Rocío Jurado.

As the saying goes, age is a degree.

Therefore, here everything works much better.

The journalist directs her friend's career and succeeds in getting Tony Caravaca, Isabel's representative until then, fired.

You already have all the control.

Encarna and Isabel, the day they meet for the first time for an interview.

The singer then interprets

, but the focus of attention has to be put on a specific topic,

You are a lie

. The lyrics speak of a woman betrayed by a friend, whom she does not leave in a very good place. Quickly, it was understood that it would have been a commission from Encarna to Perales, the author of the song, to

. Perales has denied this story and those who know him know that he would not have accepted such a game. However, Encarna could have plotted it without telling the author his true intention, since with his tricks and his hypnotic voice he was capable of achieving anything.

The spirits between the three women are heated and, then, Azabache arrives, a copla musical for Expo 92. The poster is headed by Rocío Jurado. No sign of Isabel Pantoja.

It has been suggested that it was Rocío who vetoed Isabel

. Above, adding to the show María Vidal who, being only four years younger than Isabel, was presented as the future of the copla when, really, her career paled compared to that of Pantoja. The widow of Paquirri did not sit well at all: "The most admired, the most acclaimed and

the most friends of the politicians will

when asked about his absence.

Carlos Ferrando, who worked as a press in Azabache, assures that Rocío fell in love with someone on the team there.

He does not reveal who, he leaves the cape for others to tie.

But not even being in love appeases Rocío, who

after hearing the controversial lyrics of

took out of her repertoire all the songs composed by Perales

for her except for one, Qué no da yo. She grabs it and puts it in bulerías, implying that with her art she improves it," a television director explained to LOC.

The Jury was so flamenco that

even her revenge was done to the beat

They even spend the summer together with little Kiko Rivera.

The paparazzi Diego Arrabal takes them out enjoying the sea, but a magazine buys the photos so that they are never published.

fears those images will destroy her career

It has not been until 2019 when they have seen the light.

They did it in

, the program in which the photographer collaborates.

Clara Suñer was the only beneficiary of the will of Encarna SánchezE.M.

For her part, Rocío Jurado married José Ortega Cano in 1995. Encarna launched attacks on the bride from her microphone: "At that age you cannot wear the veil of purity," she commented with disdain. The fury felt by the journalist at that time was such that Terelu Campos has told in Viva la vida that, after covering the wedding of the Jury commissioned by TVE,

Encarna Sánchez was poking her and criticizing harshly

: "Until my mother raised the He called on the phone and said: 'Encarna, if the problem has to do with Isabel Pantoja, don't worry, when she gets married I'll also broadcast her wedding as she deserves,' "recalled Teresa Campos' daughter. Encarna reacted by not mentioning Terelu forever.

Ignoring her was another way to hurt her

Months later, Encarna and Isabel break their friendship. The announcer suffers from advanced cancer, but refuses to let anyone know. Now yes, photos of Isabel are published on the beach, but this time it is with another friend, María del Monte. Encarna sinks from this moment on, she will never raise her head. A year later,

in 1996, he died at home consumed by loneliness and grief

After the death of Encarna, it seemed that the two singers were reconnecting.

An audiovisual producer plans a gala on TVE in which they would act together.

The news transcends, the lovers of the song celebrate it.

The producers call Pantoja and tell him about the project.

if Rocío did not want to live, it is not fair that I do it now

What Encarna separated, that she does not join even after she is dead.

The other women who marked the life of EncarnaGtres

The other women of Encarna

Encarna Sánchez's life was marked by the presence of Isabel Pantoja and Rocío Jurado, but many other women crossed paths on her way. One of them was

, who for some time led her own space in Encarna's program at COPE. At that time, the relationship between the two was wonderful. The Sevillian

from Manolo Santana. Encarna, on the other hand, saw in her something more than friendship. The tables turned when Isabel Pantoja entered the game board. However, the end of the relationship was not conditioned by the presence of the singer, but by

a birthday party in which things did not end very well

. According to the book

, Mila was in a drunken state and Encarna took advantage of the situation to try to have something else. Mila objected and that was the matter. But Encarna suffered from that unrequited feeling and

that Mila could make her life with other men tortured her

. His love turned into madness and the last words that, supposedly, he said to him were: "Get out of Spain."

Although everything that happened between Mila and Encarna is more or less common knowledge, what surrounds the name of

- is a mystery. The young woman was a radio actress who worked for Radio Nacional in the 1960s. She also made some appearances on television, in the TVE program, Estudio 1. She met Encarna when she arrived in Madrid from Carboneras (Almería) and they

. When she left for Mexico, Encarna made a will and named the actress and her mother as the only heirs. Never, not even in his last years in which he was aware of his prognosis, did he change the will. Thus, Pilar Cebrían became

the heir to Encarna Sánchez

Another name surrounded by mystery is that of

While still a minor, he would go to see Encarna doing the early mornings of Radio Miramar.

When the program was transferred to COPE, in Madrid, the young woman is already part of the staff and lives with Encarna.

Closer or farther, they were always united

However, not all the names of Encarna's women carry secret passions.

She and Encarna met in Madrid at the end of the 60s. Their relationship was always very deep, so much so that the journalist

died in his arms

saying her last words, which were for Isabel Pantoja.

To the shame of both,

their destiny was linked by a terrible reality, cancer

When the singer dies in 1995, Encarna shudders.

Think that if a woman with the strength and claw of Lola Flores has died, she too can succumb.

In life they were great friends and confidants.

Montserrat How is the clergy of the 'procés'!