The US turns definitively towards the Indo-Pacific

The Bombay Bidens arrived at the White House on Friday. Because the president of the United States, Joe Biden, has always talked about his Irish origins, often to ... 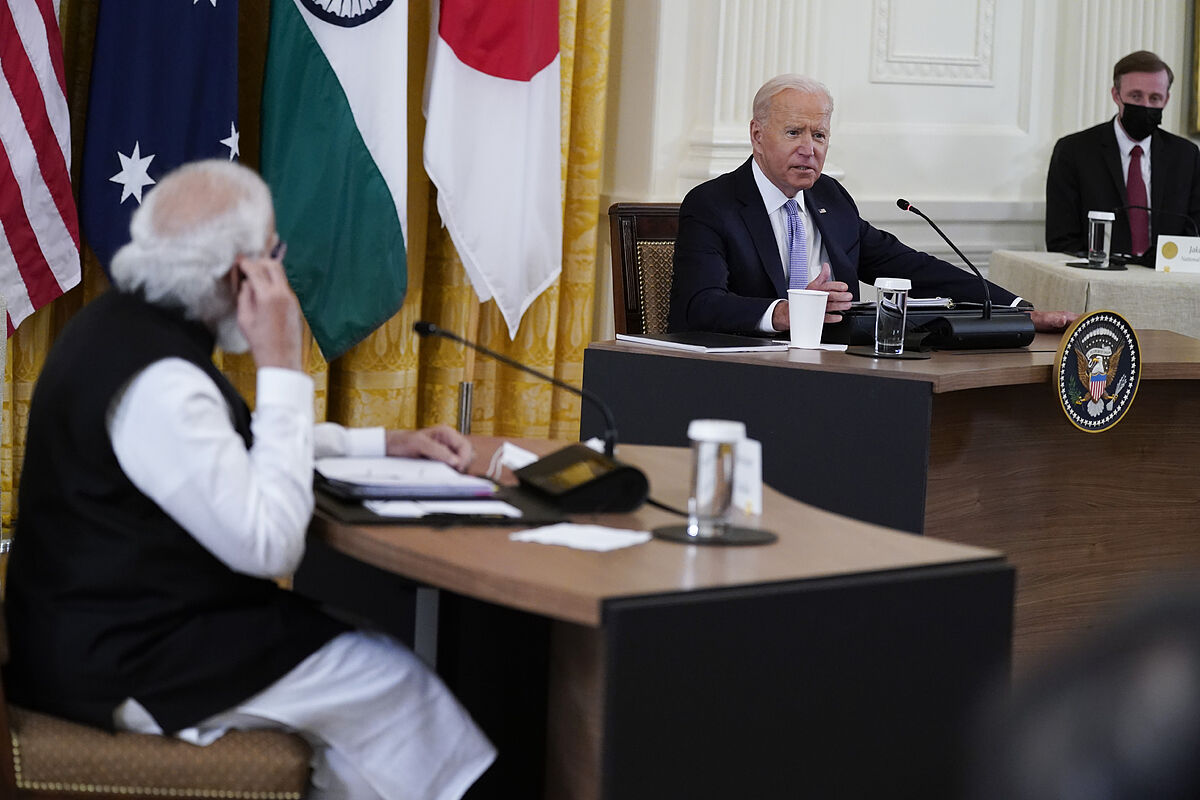 The Bombay Bidens arrived at the White House on Friday. Because the president of the United States, Joe Biden, has always spoken of his Irish origins, often to express estrangement towards the United Kingdom. But, in 2013, he mentioned that he may have a distant family in the Indian city of Bombay. And now Indian Prime Minister

has used his visit to the White House to inform Biden that this is indeed the case.

"I have brought the documents"

that prove it, said Modi, along with a smiling Biden, whose 'lamp-hugging' personality always manifests itself when he meets with foreign heads of government (with the exception of Pedro Sánchez).

present himself as the first president of the Indian Ocean,

even though the links between the Delaware Bidens and the Bombay Bidens appear to date from the late 18th century.

It is not a casual statement. Obama launched "the turn to the Pacific" in 2010. A decade later, Biden has reinforced it with the Aukus - the new defense pact with Australia and the United Kingdom - and has taken it a further ocean, to the Indian Ocean. The new vision of the US world was revealed this Friday afternoon - night in Spain - when the Quadrilateral Security Dialogue (known as the 'Quad') held

its first meeting of heads of state

and government in Washington. There were Biden, Modi, the Japanese Prime Minister, Yoshihide Suga, and the Australian Scott Morrison. In its 17 years of existence, the 'Quad' had only once had a 'virtual' meeting, again at Biden's urging, last March.

The leap in the relationship between the four countries is one of those events that activate the salivary glands of experts and geeks of geopolitics. And they are not lacking in reasons. In the 'Quad' are the first (USA), third (Japan), and sixth (India) largest economies on Earth, and two nuclear powers (USA and India), with a total population of 1.75 billion people. In front of them is

the second largest economy in the world,

and with 1,400 million inhabitants.

Beyond the numbers, the formalization of the Quad also represents a

on the part of India. Until the 1990s, that country was part of the Non-Aligned Movement, a group of developing countries that in theory tried to stay out of the dispute between the USSR and the United States but that, in practice, tended to be closer to Moscow than to Washington.

Now, Apple, Amazon and Wal-Mart have their hopes of future growth in that country, which is already the second largest market for Facebook in the world, the largest European steel company (Arcelor, with plants in Asturias) is owned by Indian capital, and New Delhi has had a nuclear cooperation agreement with the United States since 2005. But the acceptance of the 'Quad' is also an exercise in humility on the part of Modi, who has seen how

to the point that the country has had to accept, for the first time in 16 years, international aid to fight a natural catastrophe. The embrace of the 'Quad' reveals that the ideas of India as 'lord of the world' and 'self-sufficient' - which Modi had set as a goal for the country -, are unviable. New Delhi can't go it aloneand less when China is

surrounding with trade agreements with its neighbors:

Pakistan, Bangladesh, Ceylon, Burma, Nepal, and, since the arrival of the Taliban, Afghanistan.

But whoever thinks that we are witnessing the birth of a new military organization like NATO is wrong. The 'Quad' is less than the Atlantic Alliance, since it is not an organization and does not even have a Secretariat. But it also

has a much larger field of action.

In fact, it was born by a natural phenomenon: the 2003 tsunami, which caused 225,000 deaths in fourteen countries. On the basis of international cooperation after the disaster, Japan proposed, with the support of the George W. Bush Government, to create, with India and Australia, in 2007 the 'Quad', with the idea of

And that is where this forum is more than NATO. This forum is not limited to defense, but also to cooperation in areas such as the

defense of the environment, and cooperation for sustainable development, all of which are issues that remain outside the agenda of the mega infrastructure projects that China uses to extend its influence in Asia.

For example, after the telematic meeting in March, the four members agreed that India would

produce one billion doses of vaccines

against Covid-19, which would be paid for by the United States and Japan, and distributed to countries in the region.

The goal was clear: to present an alternative to the vaccines that China was delivering to many developing countries.

The brutal 'second wave' of Covid-19 in India, however, has delayed the plan for months.

However, after today's meeting, there is no doubt that there will be more initiatives.

SocietyFear in the first months of the coronavirus reduced the birth rate in Spain by 8.4%

This is the Olympics of war: tank races, missile launches and fleeing a fire