Massive climate protests in Germany ahead of elections

With less than two days left until the election in Germany, climate protests have been held in hundreds of places in the country. Since Greta Thunberg's movement Fridays for future announced a global climate strike. - To vote alone is not enough, says Greta Thunberg to SVT. 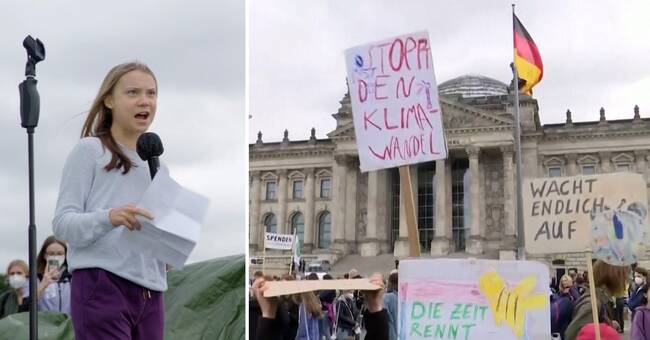 Extensive protests have been held on Friday in Berlin, Hamburg, Cologne, Freiburg, Bonn and hundreds of other places in Germany - where there are elections on Sunday.

The protests are a small part of the global climate strike announced by Greta Thunberg's movement Fridays for future.

A total of around 1,400 protests in 80 countries will be held, reports Die Welle.

Greta Thunberg herself went on strike on Friday outside the German parliament, the Bundestag.

- Of course we hope that politicians take their responsibility, but we must also understand that just voting is not enough but we must become activists and take to the streets and demand change, says Greta Thunberg to SVT.

- We can no longer leave this to those in power to do something about, Greta Thunberg said when she spoke shortly afterwards, and was met with applause from thousands.

See Greta Thunberg's fire speech in Berlin in the clip above