La Dana is causing real havoc as it passes through Extremadura since on Thursday night they raged in this autonomous community - throughout the morning without ... 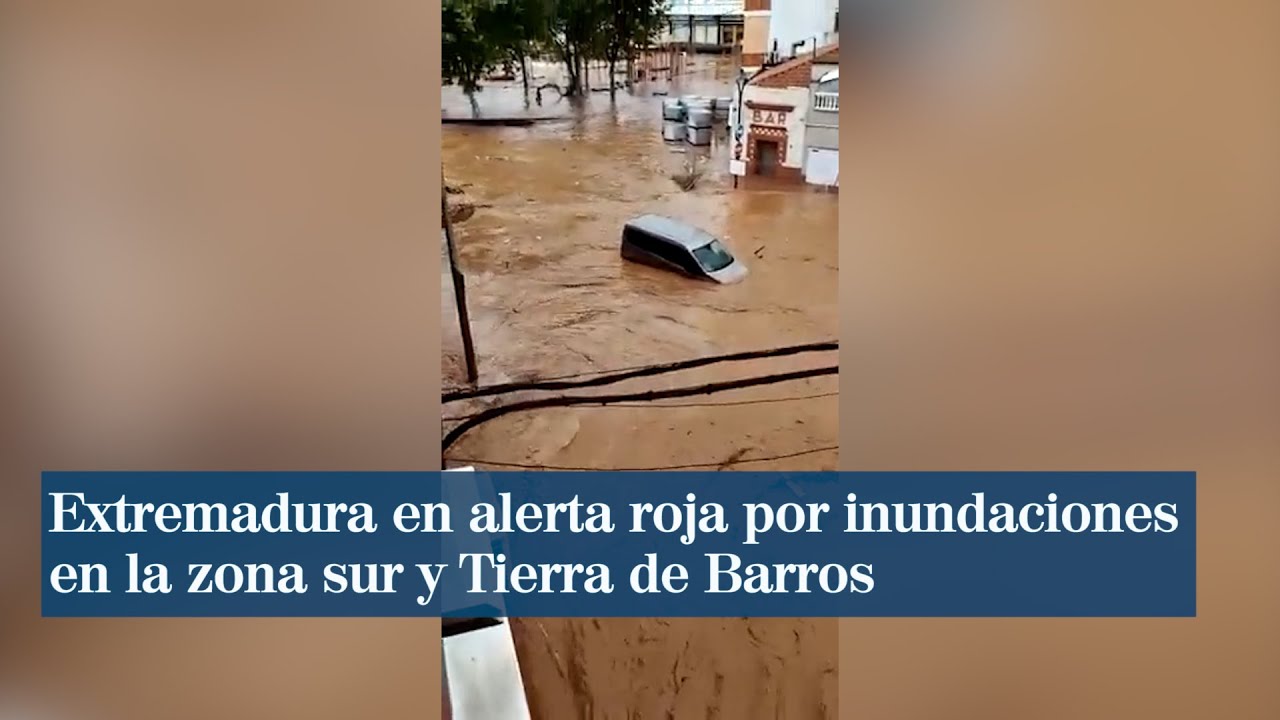 real havoc as it

since on Thursday night this autonomous community raged - throughout the morning without a break - intense rains, storms and electrical discharges, which have had a special impact on the southern area of ​​the province of

, where the accumulated bags of water have caused the interruption of circulation on the A-66 between

in both directions, as well as on a section of the A-5 near

, with 26, being the town where it has rained the most in all of Spain (46.6 liters per m2). In the capital of Extremadura, even a van has been burned after being struck by lightning.

There have been roadblocks and urban centers (especially in Almendralejo, where the streets have been flooded and cars flooded with water, with a high number of material damages when some fences were demolished). The

of this town of

has recommended not taking children to school and avoiding unnecessary travel.

In parallel, there have been floods in schools. The most worrying has been the

, where even ceilings have collapsed, which has led to the suspension of classes. Specifically, about 140 primary school students have been evicted from the center due to the serious damage caused by the rains in at least eight classrooms, as there is a physical risk due to the fall of rubble from the roofs of the classrooms and water leaks. These classrooms have been flooded.

So far there have been no relevant personal injuries in this autonomous community, although the Junta de Extremadura recommends caution and not take the vehicle at this time. The orange level alert will remain activated in Badajoz (

The most affected area is the Tierra de Barros area, where they have caused the cut of the A-66 and the N-630 highway, at the height of Villafranca de los Barros, as reported by the

in Extremadura. In addition, the A-5 is also cut between kilometers 347 and 357, at the height of Arroyo de San Serván. The A-66 also continues to be closed to traffic in the section from kilometers 657 to 658, in both directions, and where the Civil Guard has had to rescue 100 vehicles that had been isolated by traffic.

Rail traffic has also suffered incidents, specifically between the stations in the Badajo towns of Villafranca de los Barros and Zafra, on the Mérida-Zafra section of the Mérida-Los Rosales line, it is interrupted at this time.

The reason for this cut is "an incidence in the infrastructure" caused by the heavy rainfall in the last hours in the area, according to Adif.

From the Junta de Extremadura, the population has been recommended to circulate on the roads with the utmost caution, paying special attention to possible landslides, not crossing flooded roads, not parking in dry riverbeds, or on the banks of rivers and keeping clean drains and water evacuation systems.

According to the administration, the most severe part of the rain front that affects Extremadura since last morning "is already passing", with the forecast that its intensity will drop "a lot" from 3:00 p.m. this Thursday, and without so far there has been personal injury.

The city of Mérida has positioned itself as the rainiest town in the country last morning with 46.6 liters per square meter collected until 8.10 am.

According to data from the

, six Extremadura towns this Thursday are among the ten rainiest in all of Spain.

The mayor of Mérida, Antonio Rodríguez Osuna, has indicated that they are currently working to "reduce water from flooded avenues and solve with the companies in charge the cuts of electricity and water supply in some parts of the city," explained the councilor. , who has requested the collaboration of all the neighbors in the face of the situation.

The heavy rains caused by the circulation of the Dana have left eight communities on alert.

In addition to Extremadura, the incidence is especially important in Andalusia, where the province of Huelva is in the red level (extreme risk) due to rains that will leave up to 60 liters in an hour.

Specifically, Emergencias 112 Andalucía has dealt with more than 400 incidents due to the heavy rains registered in the Huelva municipalities of

which have caused flooding of homes and businesses.

As reported by the emergency service, the main reasons for warning 112 have been due to

that have been surprised by the rise in water.

and complications due to the rain in a nursing home.

, two nurseries have requested help from the emergency services due to the flooding of their respective premises;

The water has also entered the La Antilla health center, in Lepe, and the Hospitality School and several hotels on the coast have also reported problems due to the entry of water into their facilities.