Incidents in L1: stormy start to the season in football stadiums - France 24

Incidents in L1: stormy start to the season in football stadiums Paris (AFP) Since the start of the season, Ligue 1 has experienced a succession of incidents between supporters which darkens the return to the stadiums of the public after a year of closed session, total or partial, linked to the Covid-19 pandemic. - August 8: projectiles in Montpellier - First day, first incidents. The derby between Montpellier and Marseille degenerated in the stands at the e 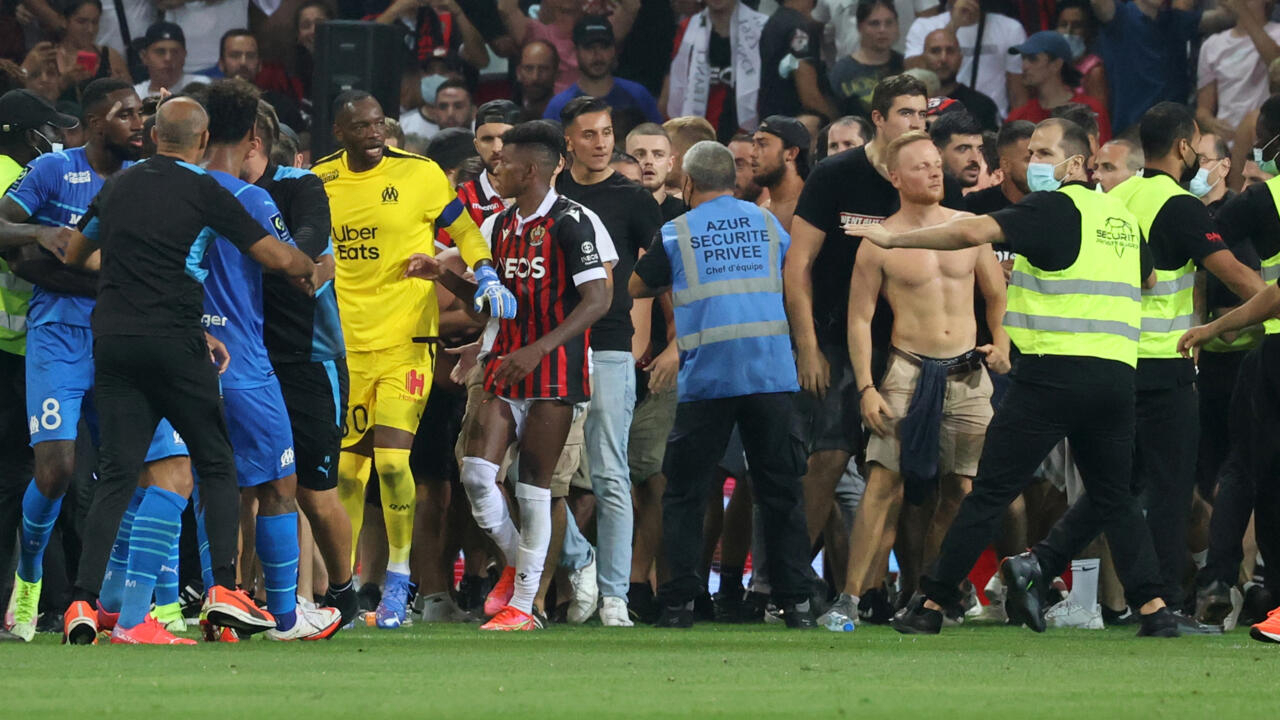 Since the start of the season, Ligue 1 has experienced a succession of incidents between supporters which darkens the return to the stadiums of the public after a year of closed session, total or partial, linked to the Covid-19 pandemic.

The derby between Montpellier and Marseille degenerated in the stands at the end of the match.

OM player Valentin Rongier was hit in the head by a bottle, while he was celebrating with his team the goal that allowed his team to get back in front (3-2).

Then the match is interrupted with new throws of projectiles.

After 12 minutes of confusion, it resumes and then ends, with a victory for Marseille.

After the Breton derby between Rennes and Nantes (1-0), supporters of the two teams try to do battle.

The images relayed by social networks show folded barriers, but no direct clash between supporters.

Two men will be tried in March 2022 for violence against a security guard.

A new critical threshold is reached during the Mediterranean derby between Nice and Marseille, poster for the 3rd day of Ligue 1.

While the "Gym" led 1 to 0, clashes broke out in the 75th minute, when Marseille's Dimitri Payet was about to take a corner.

Hit on the back by a plastic water bottle, the player sends the projectile back to the platform of Nice ultras, some of whom, in reaction, invade the lawn.

Blows are exchanged between supporters, players and members of the staff, forcing the referee to recall the actors to the locker room.

After more than an hour and a half of interruption, the meeting is definitively stopped when Mr. Benoît Bastien notices, when restarting the game, the absence of the Marseillais, who refuse to resume.

After two weeks of investigation, the disciplinary committee of the LFP decides to close the two incriminated stands at the Montpellier stadium for three matches.

For Nice-OM, it punishes the Côte d'Azur club for a meeting behind closed doors, as a precaution, pending the outcome of the investigation.

Faced with the extraordinary dimensions of the case, the disciplinary committee relocated to a Parisian hotel, where Marseillais and Niçois parade.

After a five-hour marathon meeting, the disciplinary committee imposed on OGC Nice a withdrawal of two points (one of which was suspended) as well as the total closed door of its stadium for three matches.

Pablo Fernandez, an assistant to Jorge Sampaoli, is suspended until the end of the season for punching a Nice supporter who entered the pitch.

The poster will also have to be replayed, on neutral ground, on October 27.

At half-time for the North derby between Lens and Lille, dozens of Lensois supporters invaded the field to go to battle with the Lille parking lot, from which several seats were thrown.

The police try to contain the overexcited Lensois supporters during the Lens-Lille match at the Bollaert stadium, September 18, 2021 FRANCOIS LO PRESTI AFP / Archives

The clashes, limited by the intervention of the CRS, resulted in six minor injuries.

Following these, the kickoff of the second period is delayed by about thirty minutes.

- September 20: sanctions against Lens and Lille -

The disciplinary commission sanctions the Lens club with a total closed door of its stadium as a precaution, and closes the parking lot of Lille supporters outside, postponing its decision to October 6.

Asked the next day by BFMTV, the Minister for Sports Roxana Maracineanu advocates the use of "individual sanctions", rather than collective.

Before the meeting between Montpellier and Bordeaux, a bus of Bordeaux supporters falls into an "ambush" organized by some of their Montpellier counterparts.

The general brawl that ensued left 16 lightly injured, according to an initial assessment.

In Angers, after the match against Marseille (0-0), several dozen Marseille supporters leave the visitor park and destroy equipment before the stewards restore order.

The stewards send back to the stand of the Marseille supporters who invaded the field after the Angers-OM match at the Raymond-Kopa stadium, September 22, 2021 JEAN-FRANCOIS MONIER AFP

"There was a provocation on the part of the Angevin tribune, with fingers of honor and firecrackers which were sent from the Angevin side towards the Marseillais. The Marseillais responded, it is a classic and stupid scheme, d 'one side and the other,' laments Jacques Cardoze, OM's communications manager, to the press.

The next day, the Minister of National Education, Youth and Sports Jean-Michel Blanquer called on LCI's microphone to be "firm" in the face of "unacceptable" incidents.