Success for the bianconeri in comeback. At Arechi it is 2-2, the first point for Salernitana 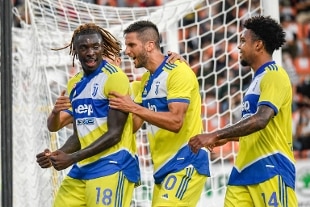 22 September 2021 On the fifth day, the first victory in the league for Juventus that at the Peak manages to beat an excellent Spezia 3-2 in a comeback after a complicated match. The bianconeri, in search of the 3 points in Liguria, start strong and at 27 'they unblock it with Kean, 5 minutes later the equal of Thiago Motta's team arrives with the Ghanaian Gyasi. In the second half on the counterattack, minute 49, the home team hits with Antiste. Juve does not break down and finds the same with Chiesa in the 66th minute. To complete the work we think De Ligt who on the development of a corner scores the match goal in the 72nd minute. In the standings the bianconeri go up to 5 points, while Spezia stops at 4.

At 2 'the first opportunity is for the Ligurians, on a cross from the right, Bonucci does not intercept the ball that arrives in the availability of Gyasi who does not find the impact with the ball. Juve lights up, Chiesa goes to the bottom and puts it in the center for Kean, the ball deflected for a corner. At 14 'on the development of a corner Bonucci makes the bank and De Ligt right from the center-area shoots high. At 27 'Juve pass, Bonucci's long ball for Rabiot who acts as a tower for Kean, the young striker pretends to be the defender and overtakes Zoet with a diagonal.

Spezia reacts, Verdi tries from the edge, Szczesny flies to deflect for a corner. It is the prelude to the goal that arrives in the 33rd minute, Gyasi returns to the right from the edge and full neck, with a deviation, overtakes Szczesny with a shot aimed at the intersection. At 40 'Dybala gets a free kick from the edge, the shot ends up in the arms of the goalkeeper. The Argentine tries shortly after from outside, Zoet raises a shot intended for the net over the crossbar. The bianconeri's last chance always on a free-kick, Dybala's shot is easy prey for the goalkeeper.

At the beginning of the second half double change for Allegri who redesigns the team, inside Alex Sandro and Locatelli for De Sciglio and Bentancur. Juve starts in attack but in the 49th minute on the counterattack it is Spezia to strike with Antiste, the Frenchman starts from midfield, overtakes Bonucci in marking and with a tense shot at the near post overtakes Szczesny. Juve's reaction was immediate, a shot by Chiesa deflected by a defender who risks his own goal.

At 54 'Dybala catches Kean in the center-area, the central shot is saved by Zoet. Two minutes later Chiesa serves McKennie who wastes from a good position finishing over the long post. In Juve enters Morata for Kean. Left around Dybala, the goalkeeper stretches out for the detour. Juve always ahead, Bonucci head on a corner pulls high.

At 64 'opportunity for Spezia, Antiste receives the ball in the heart of the area, the safe shot is saved by Locatelli on the goal line. Juve is not there, Chiesa steals the ball from an opponent at the corner, enters the area and after a beat and replies he is face to face with the goalkeeper and burns him at the exit. Allegri throws Bernardeschi into the fray for Rabiot. At 72 'Juve puts the arrow, on the developments of a corner the ball arrives on the right of De Ligt who makes no mistake: 3-2 Juve.

Juve takes a bit of breath after the effort, triple change for Thiago Motta who inserts Manaj for Verde, Salam Nzola in place of Antiste and Sala for Bourabia. Last change of

Merry, Chiesa takes a seat on the bench, Kulusevski enters. At 85 'providential closure of Szczesny on a cue from Maggiore.

Final under pressure for Spezia, header by Amian who detaches undisturbed but does not find the door. There are 6 minutes of recovery with the 'eagles' forward in an attempt to straighten the result. Juve counterattack with Morata who tries the eurogol from the trocar, ball out. Juve freezes the match until Aureliano's triple whistle.

2-2 draw between Salernitana and Verona.

At the Arechi stadium an uphill match for the team from Campania who in the first half were hit twice by a brace from Kalinic, 7 'and 29'.

In recovery, Castori's men shorten with Gondo, in the 76th minute it is Coulibaly who gives Salernitana her first point in the championship.

The Scaligeri, after the success against Roma, move the ranking up to 4 points.