Analysis: Unexpected message - but most importantly the promise is missing

China's unexpected announcement means a recognition that green energy sources are competing with coal economically. But Xi Jingping never made the most important climate promise - the expansion of coal-fired power at home continues. If the world is to meet the 1.5 degree goal, China must instead close 600 coal-fired power plants within ten years. 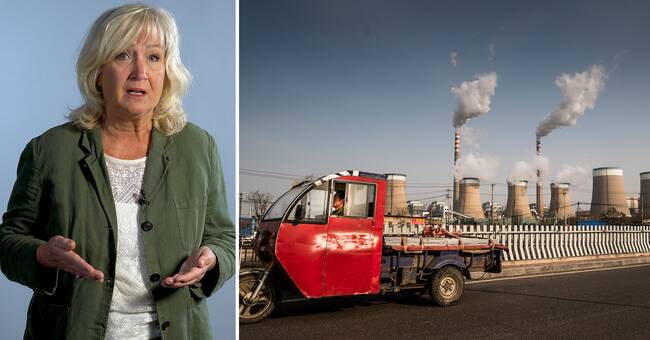 When the UN General Assembly opened last year, his message came that China is setting an end date for its emissions - the country will have net zero emissions by 2060.

Last night it was time again.

Many had hoped for a message that China was closing down its own coal-fired power plants.

As China is responsible for a majority of all new coal power investments in developing countries, the announcement is a step forward for the climate.

Earlier, both Japan and South Korea announced that they would stop funding coal-fired power projects abroad.

The three countries have accounted for 95 percent of all aid-financed coal power in developing countries.

But according to the Financial Times, the Beijing-based think tank International Institute of Green Finance states that between 2014-2020, China already decided to scrap half of its planned coal-fired power plants abroad "due to increased economic competition from wind and solar power".

China's turnaround would thus be more motivated by what is economically profitable than caring for the climate.

The country accounts for 27 percent of global emissions.

A review conducted by Global Energy Monitor shows that during the first half of 2021, China announced plans for 24 new coal-fired power plants, together with new steel-fired power plants at home, China's emissions will increase by 150 million tonnes of carbon dioxide per year.

China's climate strategy seems to be running at full blast with coal power - until the deadline of 2060, while a majority of the world's countries are instead considering how to halve their emissions by 2030. To achieve their goal of achieving net zero emissions to By 2060, China will have to shut down 600 coal-fired power plants over the next ten years, according to estimates from TransitionZero.

Tensions are high between China and other countries around the negotiating table at the global climate negotiations, which begin in Glasgow in early November.

Xi Jingping has not yet announced whether he intends to attend Glasgow.

China is under great pressure where both the EU and the US are planning carbon dioxide tariffs that will affect Chinese exports.

That China chose to come up with a promise of less coal power was a welcome message for Boiris Johnson, but the big challenge remains.

Australia has opened the world's largest coal mine.

None of these three countries have so far made any stricter climate promises to Glasgow.

There are five weeks left.