The US government has started to massively expel hundreds of migrants, mostly Haitians, to their countries of origin, who had gathered in a makeshift camp in Texa ... 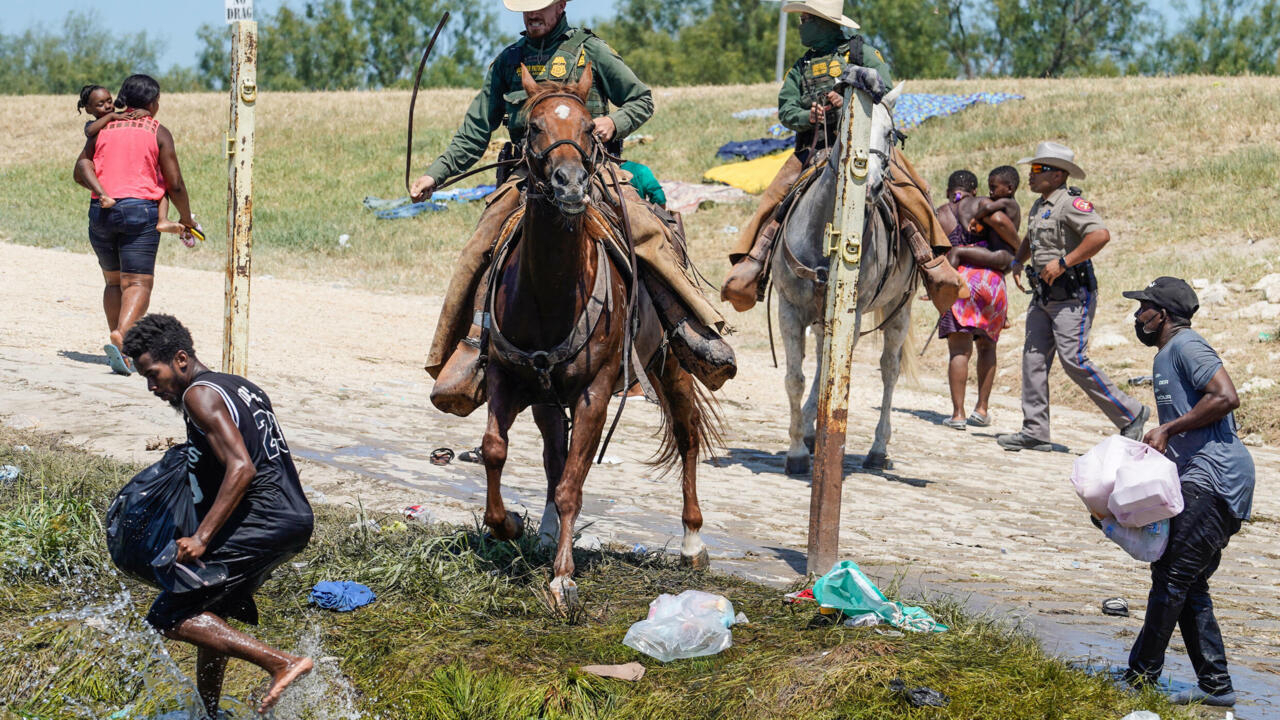 US border guards on horseback attempt to stop Haitian migrants from entering an encampment on the banks of the Rio Grande near the Acuna del Rio international bridge in Del Rio, Texas, September 19, 2021. AFP - PAUL RATJE

The US government has begun mass deporting hundreds of migrants, mostly Haitians, to their countries of origin, who had gathered in a makeshift camp in Texas in recent days.

This Monday, September 20, Mexican President Andrés Manuel López Obrador urged Joe Biden to work hand in hand with Mexico and the countries of Central America to contain migration other than through the arrests and deportations of people.

The image caused a lot of reaction in the United States, underlines our correspondent in Houston,

An American border guard appears to be whipping a Haitian migrant who tries to set foot on the American side after crossing the Rio Grande. It comes from a video shot by Reuters on Sunday, September 19 at the border between Mexico and Texas, in Del Rio. Frightened Haitians running through the water near horses ridden by border guards. With his lasso, one of them makes a quick gesture in the direction of one of the Haitian migrants, it seems that he tries to charge it afterwards. In another photo, he grips it tightly.

As soon as it was released, the

met with a flood of criticism on Monday.

Democrat elected Ilhan Omar, who arrived in the United States as a refugee from Somalia, condemned an outright violation of human rights.

Not in line with the policy of the Biden administration

Asked about the subject, White House spokeswoman Jen Psaki had to react: “

We have just seen this video.

It is horrible to watch.

I need more information on this.

But any situation where an individual is treated inhumanely, at our borders or elsewhere, is not in line with the policy of the Biden administration.

For their part, the American security director Alejandro Mayorkas and Raul Ortiz, the head of the border guards, who worked for a long time in Del Rio, immediately assured that an internal investigation would be set up.

Representatives of the Haitian diaspora have also reacted, such as the president of the Haitian Bridge Alliance Guerline Jozef, and called for an end to the evictions.

the world is now looking at the United States

To listen: Migrants from Del Rio: "Haiti does not have the means to welcome them"

You will lose money and fail

The shocking image comes as the US government began mass deporting hundreds of migrants, mostly Haitians, to their countries of origin, who had gathered in a

in recent days. They had crossed the border between Mexico and the United States illegally. So far this year, more than 147,000 migrants have been intercepted in Mexico on their way to the border. On the American side too, we have reached record figures of arrests of Central American and Haitian migrants, at a rate of 200,000 per month this summer.

In South Texas, 600 federal agents are now in the Del Rio area, where the camp under the border bridge is being emptied. Some 6,500 migrants have either been expelled or sent to other centers in recent days, including 3,000 on Monday. The remaining tens of thousands will be transferred during the week. Each day, one to three planes will be chartered to go to Haiti. US Director of Security Alejandro Mayorkas visiting Del Rio reiterated the Biden administration's message of firmness.

We are very concerned that Haitians who follow this route of illegal immigration receive false information about the alleged opening of borders or the accessibility of temporary protection status for all Haitians,

Only Haitians who arrived on American soil before July 29 are eligible for this status. I want to be sure everyone knows that if you come to the United States illegally you will be deported! Entering illegally is not worth it. You will lose money and fail. You will endanger your life and that of your family. This administration is committed to developing legal, safe and humane immigration, but this is not how it will be achieved

See also: United States: on the other side of Del Rio, the distress of Haitian migrants stranded in Mexico

Biden wants to show his "

ability to control the Mexican border

This show of force marks the start of one of the largest large-scale expulsions of migrants from the United States in decades.

Why this sudden decision on the part of Joe Biden's administration?

This is a problematic situation because the United States must grant new arrivals the opportunity to apply for asylum before deporting them,"

explains Ernesto Castaneda, immigration expert and professor at the American University in Washington DC, joined by

, from the international service of RFI.

Joe Biden has surely felt a lot of pressure from the Republican Party as well as the Democratic mayor of Del Rio, who find that the president is no longer able to control the Mexican border.

For a long time, Mexico has accepted returns of migrants who tried to come to the United States,”

Today, Mexico increasingly refuses to accept migrants returned from the United States. The other reason why the Biden administration decided to return the Haitians by plane is so that they do not try to cross the border again. It often happens that migrants returned to Mexico try their luck four or five times before successfully crossing the border. The last reason for these expulsions: many Haitians thought they were protected by the TPS, a temporary status granted to nationals of certain countries at war or victims of a natural disaster, including Haiti. But this agreement does not apply to new arrivals. So this is another way for Biden to discourage more Haitians from trying to come.

Faced with this crisis, Andrés Manuel López Obrador is convinced that he has found a plan to allow Central American migrants to stay at home, instead of embarking on perilous crossings only to be arrested and deported by the States. United, reports

, our correspondent in Mexico.

The Mexican president told his American counterpart Joe Biden in a letter the contents of which he revealed on Monday.

We must order the migratory flow to avoid disorder and guarantee human rights,”

But we cannot limit ourselves to applying restraint measures, let alone coercive measures.

The Mexican plan is to ask Washington to fund training and support programs for peasants in Central American countries, which are already successful in southern Mexico, according to López Obrador.

We could provide aid in less than six months to 330,000 people, and they would see this joint action with hope

However, the Mexican president is not immune to contradictions.

He himself ordered the deployment of more than 20,000 troops to the borders with Guatemala and the United States to contain the Central American and Haitian migrants who, in recent weeks, have organized several caravans to the North.

Attempts violently repressed by the National Guard and the Mexican army.

To listen: "The policy of the United States to manage the migratory crisis, it is to help the countries on the spot"