The Libyan High Council of State rejected the withdrawal of confidence in the national unity government by the Tobruk House of Representatives, defining the vote as "null and void" 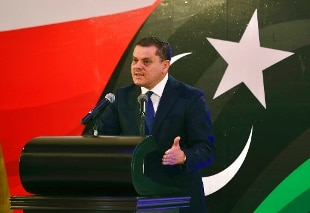 September 21, 2021 An iron arm between the different and divided institutions in Libya. The Libyan House of Representatives (Hor) has approved a motion of no confidence against the government of national unity of the interim prime minister Abdel Hamid Dbeibah. The spokesman for the Tobruk-based parliament, Abdullah Bliheg, confirmed this on Facebook, stating that 89 of the 113 deputies present in the chamber voted to withdraw support from the executive.

"The government - added the spokesman - continues its ordinary activities". Elections in the country are scheduled for December 24th.

The House of Representatives formally has 200 seats but at the moment it is also physically split between Tobruk and Tripoli and it is controversial how many deputies can actually vote. However, it is a shared opinion among analysts and observers that 120-130 participants provide a legitimacy (or qualified majority) beyond any doubt. Parliamentary confidence, in the Libyan single-chamber assembly, is obtained with a simple majority of the quorum, also controversial and indicated for example in 86 voters (half plus one of the total number of really existing members) by opponents of the President of Parliament, Aqila Saleh.

The decision came two weeks after the approval of a controversial electoral law which, according to some, would be favorable to General Khalifa Haftar. Yesterday, French Minister for Europe and Foreign Affairs Jean-Yves Le Drian confirmed that France will host an international conference on Libya on 12 November.

But the High Council of State declares the vote null

The Libyan High Council of State has however rejected the withdrawal of confidence in the national unity government by the Tobruk House of Representatives, defining the vote "null and void". The Tripoli media reported.

Dictating a line that suggests an institutional stalemate without resigning the premier, the spokesman of the Libyan High Council of State (HSC) Mohammed Nasser on Twitter rejected as "nothing" the distrust voted by the Parliament of Tobruk. "The Supreme Council of the State has rejected the revocation of confidence in the Government of National Unity, and considers them 'void' because they violate the Constitutional Declaration and the political agreement," the spokesman wrote. The HSC "considers zero anything that results from these measurements," Nasser added.