Eskilstuna resident Anna Jerdén is a replacement for the Social Democrats in the culture and leisure committee. At the same time, she has participated in a major climate action in Oslo where the purpose was to protest against the oil industry by using civil disobedience. - I do everything I can legally but sometimes it is not enough, she says. 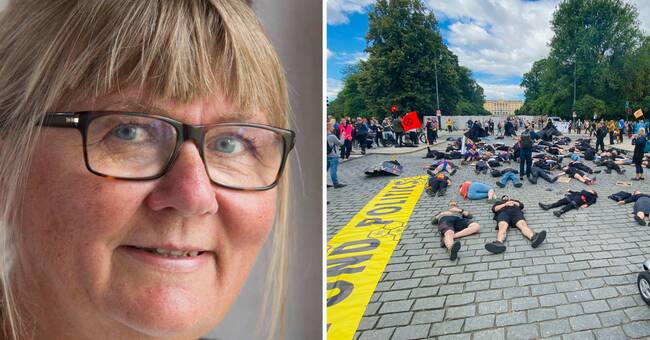 The campaign was organized by the climate organization Extinction rebellion at the end of August, ahead of the Norwegian election.

Anna Jerdén went there, well aware that she risked being prosecuted.

On Wednesday last week, a trial was held in Oslo District Court, and Eskilstuna residents risk having to pay a fine of 14,000 Norwegian kroner.

What do you think about having a position of trust, it is often said that politicians should set a good example?

- I think I have done that, I have set a good example by demonstrating against something that is wrong.

When the action took place, Anna Jerdén was also a committee member in Eskilstuna District Court.

When the district court became aware of the criminal suspicions, a suitability test was initiated against her, as judges can be considered unsuitable for their assignment if they commit a crime.

Then Anna Jerdén herself submitted a request for dismissal, says the district court's lawyer Nils Cederstierna.

- We did not have time to try her.

I do not know what the trial had led to, he says.

May remain on the board

The Social Democrats in Eskilstuna have had talks about whether Anna Jerdén can remain as a replacement in the culture and leisure committee, and have come to the conclusion that they have continued to trust her.

- We have made the assessment that civil disobedience is a less serious type of crime.

What Anna has done is to protest against Norway continuing to mine more oil and gas during a climate crisis.

As a person, I have respect for the campaign even if I myself would not participate in one, says Mikael Edlund, the party's vice chairman in Eskilstuna.

In the clip above, Anna Jerdén tells why she chose to participate in the campaign.