How can Taiwanese compatriots who have fallen from the epidemic in their home country take care of epidemic prevention and reunion?

China News Service, Hangzhou, September 21 (Guo Qiyu) It's another time to spend a good year. For the majority of Taiwan compatriots working and living on the mainland, normalized epidemic prevention and control has temporarily blocked their return to their hometowns to reunite with their relatives, but it cannot block the wanderers' desire for reunion. Compatriots on both sides of the Taiwan St 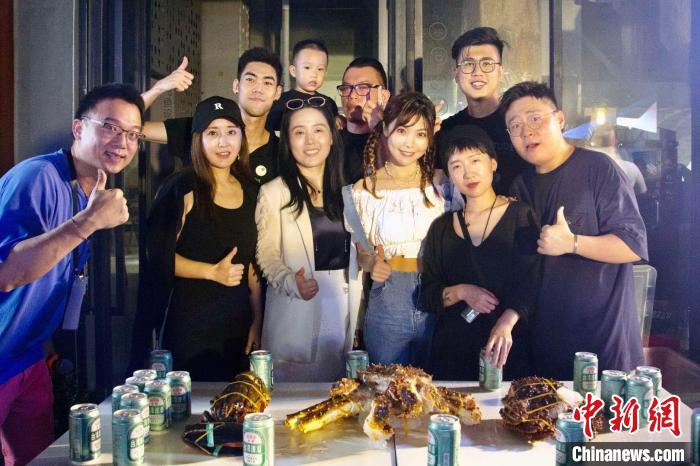 For the majority of Taiwan compatriots working and living on the mainland, normalized epidemic prevention and control has temporarily blocked their return to their hometowns to reunite with their relatives, but it cannot block the wanderers' desire for reunion.

Compatriots on both sides of the Taiwan Strait gather together in the "cloud" through online and offline methods such as social interaction and video connection, so that their longings will not diminish and the reunion will be stronger.

This Mid-Autumn Festival, Taiwanese youth Xu Hanjie spent with his friends in Hangzhou. Both his parents and his wife are in Taiwan.

Affected by the epidemic, they have not seen each other for more than a year.

"Although I can't meet my family for the time being, communication is very convenient now. We can interact with each other via video anytime and anywhere. It is also reunited." Xu Hanjie is very optimistic.

Youth on both sides of the strait celebrated the Mid-Autumn Festival together.

In 2016, Xu Hanjie returned to work in the mainland of his motherland from overseas, taking the mainland as a place to realize his career ideals.

Therefore, he and his wife, the temporary "Cowherd and Weaver Girl", intend to settle their home in Hangzhou and focus their work and life on the mainland.

A bright moon shone into the hearts of wanderers on both sides of the strait.

At the 2021 Mid-Autumn Friendship Meeting for Taiwanese Compatriots in Ningbo City, Jiang De'en, who is far away in Taipei, Taiwan, said through a video that due to the impact of the epidemic, the exchanges of relatives on both sides of the strait have been hindered, but the family relationship that blood is thicker than water will not be cut off.

"On this festival, which symbolizes reunion, our family is eating barbecue and tasting moon cakes in Taiwan. I miss my relatives in Xikou, Fenghua very much, and look forward to having a reunion dinner with them," said Jiang De'en.

At the time of reunion, some people are on the mainland, some are far away in Taiwan, and some are on the road.

Taiwanese compatriot Cheng Huawei has just returned to the mainland from Taiwan recently and is undergoing quarantine.

His wife, Yan Jindi, said in the video: "The three astronauts of Shenzhou 12 have all returned from space for the Mid-Autumn Festival, but you are still on the way. Now there are new changes in the epidemic situation on both sides of the strait. Take precautions and you must protect yourself. "The plain words are full of wishes for peace and reunion under the epidemic.

The moon is clear and the blessings are sent to each other.

Zhou Baohua, the chairman of the Hangzhou Taiwan Association, said that the compatriots on both sides of the strait are originally from the same family, and any external force is constantly separated from such family members.

"Despite being temporarily separated by the epidemic, compatriots on both sides of the Taiwan Strait have exchanged greetings and hoped for reunion in various ways, even if they are in this country." (End)