"Useless and expensive toy": how the situation with the possible delivery of the Armed Forces of the Iron Dome missile defense system is developing

It is too early to talk about the supply of the Iron Dome short-range missile defense system to Kiev, Ukrainian President Volodymyr Zelenskyy said. However, he noted that the United States intends to continue to provide military assistance to the country. Earlier, Politico wrote about the prospects for the supply of the complexes, and the office of the head of state confirmed this possibility. To date, the US authorities refrain from making specific comments on this matter. Experts do not exclude that the United States will nevertheless supply Kiev with an "Iron Dome", but point to the ineffectiveness of this weapon in the context of a possible confrontation in Donbass. 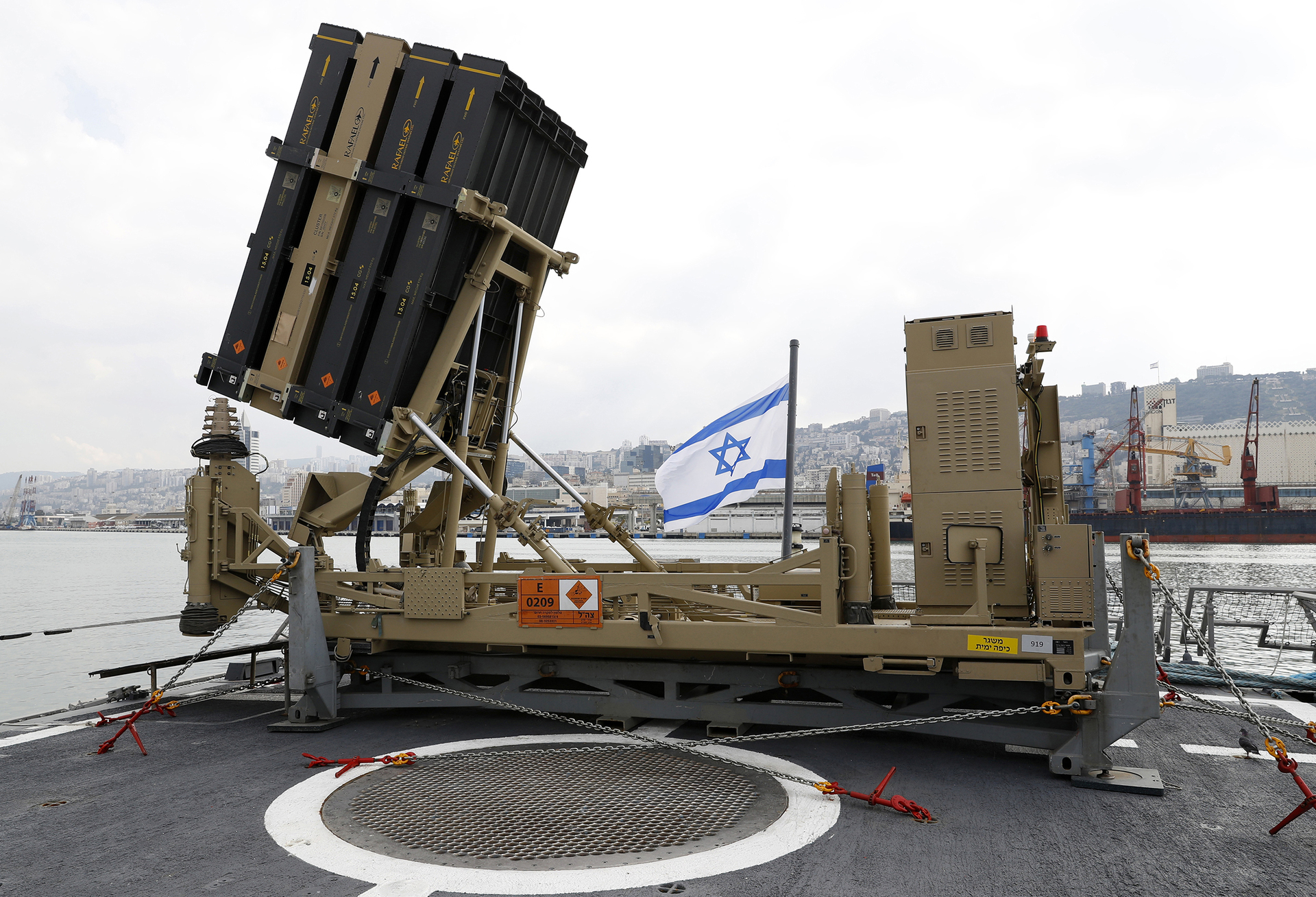 President of Ukraine Volodymyr Zelenskyy, in an interview with Dom TV before the start of the high-level week of the 76th session of the UN General Assembly, commented on the situation with the possible delivery of the Iron Dome missile defense system to the Armed Forces of Ukraine.

According to him, it is too early to discuss the transfer of this weapon to the Armed Forces of Ukraine.

At the same time, the Ukrainian leader said that the United States is ready to provide various military assistance to Kiev.

“We can say that some signals regarding support for our missile program, I mean the Iron Dome, is too early to talk about.

Nevertheless, we have heard these signals and messages from the United States of America.

) will be and will be serious, ”Zelensky said.

Earlier, the office of the President of Ukraine issued a more optimistic statement, saying that Kiev could indeed receive new air defense and missile defense systems, including the Iron Dome.

“Thanks to the agreements that were reached during the visit of President Volodymyr Zelenskyy to the United States of America, Ukraine can receive new air and missile defense systems, in particular the Iron Dome system,” the website of the Ukrainian leader says.

Thus, Kiev commented on the information published by Politico that the transfer of air defense-missile defense systems to the APU, presumably of two Iron Dome batteries, was included in the draft US military budget for 2022.

The corresponding amendment was introduced by Congressman Scott Franklin, and she received bipartisan support in the American parliament.

According to the amendment, the Pentagon must provide Congress with a report with various options for the potential sale or transfer to Kiev of weapons systems that can be deployed in Ukraine.

According to the office of the Ukrainian president, the Franklin amendment "fit well into the legislative initiative to increase security assistance to Ukraine in 2022."

Meanwhile, the US authorities have so far refrained from a clear answer on the issue of the prospects for the supply of the Armed Forces of Ukraine "Iron Dome".

So, on September 15, in a conversation with reporters, White House press secretary Jen Psaki said that Washington is ready to provide "additional assistance" to Ukraine.

At the same time, she stated that she did not have specific information on the possible transfer of the missile defense system, and promised to clarify this issue.

To date, no official information from the American side has appeared.

Commenting on reports about the hypothetical transfer of the Iron Dome to the Ukrainian Armed Forces, Russian Deputy Foreign Minister Andrei Rudenko urged not to rush to conclusions and follow the development of the situation.

"But in any case, Ukraine's pumping up of military muscles, especially receiving such massive support from the outside, does not contribute to a peaceful solution to the conflict in the southeast," Rudenko stressed.

On September 19, on the Dom TV channel, Adviser to the Head of the Office of the President of Ukraine and Press Secretary of the Kiev delegation to the Trilateral Contact Group (TCG) Alexey Arestovich said that considering the possibility of supplying the Iron Dome to Kiev would not be a quick process.

At the same time, he noted that the appearance of the Franklin amendment was made possible thanks to Zelensky's visit to the United States and a meeting with American leader Joe Biden, which took place on September 1 at the White House.

According to Arestovich, in case of a positive decision on the supply, the "Iron Dome" can be deployed both in Donbass and in other regions of Ukraine.

km from the impact of enemy fire - mainly from unguided missiles with a range of up to 70 km, such as the Grad (multiple launch rocket system, MLRS. -

), - said the adviser to the head of the presidential office.

Also, according to Arestovich, the Iron Dome is capable of intercepting UAVs and aircraft.

In his opinion, the system is capable of covering "such a city as, for example, Mariupol" (located in the Donbass near the line of contact -

) and objects of "critical infrastructure".

In May of this year, the Minister of Defense of Ukraine Andriy Taran spoke out in support of the purchase of a missile defense system like the Iron Dome.

He noted that last year the military department "began certain actions to create an anti-missile defense of Ukraine."

The Iron Dome is a short-range missile defense system developed by specialists from the Israeli company Rafael Advanced Defense Systems.

The product is mainly used by the Israeli Armed Forces, as part of its layered missile defense system.

The Rafael Advanced Defense Systems website states that the Iron Dome is a multifunctional all-weather complex capable of intercepting a wide range of air targets.

The system can be used to cover motorized or mechanized troops, point air defense of military, industrial and administrative facilities, as well as a means of protecting ships.

The Israeli-American complex is capable of functioning autonomously or as part of an echeloned air defense system.

In addition to the launchers, the Iron Dome includes a radar and control center.

These elements are entrusted with the tasks of identifying missiles flying by and calculating the flight path of shells that pose a real threat.

The interception of enemy ammunition is carried out by launching an anti-missile at a pre-emptive point.

Each unit is capable of firing up to 20 missiles.

In practice, the Iron Dome is primarily used as a means of intercepting unguided rockets launched by Palestinian groups when the conflict with Israel escalates.

During an escalation in May this year, Iron Dome batteries shot down about 90% of the rockets fired from the Gaza Strip at Israeli residential areas and military installations, according to Israeli authorities.

However, foreign and Russian experts are skeptical about the combat capabilities of the complex in the context of a possible confrontation in the Donbass.

Thus, in a commentary to Politico, a senior researcher at the Center for Naval Analysis (CNA), a researcher at the Kennan Institute of the Woodrow Wilson International Science Center, Michael Kofman, said that the Iron Dome on the line of contact would be "very quickly" destroyed by MLRS shells.

A similar point of view is shared by a military expert, director of the Museum of Air Defense Forces in Balashikha, Yuri Knutov.

In an interview with RT, he said that the Iron Dome has proven its ability to intercept primitive Palestinian rockets with a high degree of probability, but its potential to combat modern ammunition, including MLRS missiles, is "extremely limited."

The "Iron Dome" was created to a large extent to intercept the ammunition that is being released from the Gaza Strip.

In fact, it is actively used only by Israel.

In the US Armed Forces, this system has not received distribution.

And if we talk about Grads, the launch of one battalion will be enough to destroy both the Iron Dome and the area object that is under its cover, "Knutov emphasized.

According to the expert, one battery of the "Iron Dome" is capable of protecting the airspace measuring 12 × 12 km, if there is no massive artillery strike.

According to Knutov, two batteries, which, as announced, can be delivered to Kiev, "will cover only two small objects."

“After 2014, Ukraine is trying to somehow shake up the dilapidated air defense system.

Kiev is returning to service Soviet anti-aircraft systems and is looking for options for purchasing Western products.

But the "Iron Dome" will not interface with the air defense systems that the Armed Forces of Ukraine have.

This circumstance objectively lowers the already not very high fighting qualities of the system, "Knutov argues.

At the same time, the expert is sure that the Ukrainian military experts understand the futility of buying the Iron Dome.

Knutov explains the motivation of Kiev by the desire of the post-Maidan leadership "to demonstrate to the United States the status of the most zealous ally."

In a conversation with RT, military expert Ivan Konovalov also noted that the Iron Dome is not capable of resisting the massive launch of MLRS shells, including Soviet-made ones.

Nevertheless, the analyst predicts that Kiev will still receive two batteries for this system.

“Now the Americans are silent, but the idea of ​​supplying this complex, in my opinion, belongs to the United States.

The weapon turned out to be expensive - only one of its missiles costs tens of thousands of dollars.

The Americans left Iraq and, I think, decided to get rid of this ballast by giving it to the Armed Forces of Ukraine, ”Konovalov believes.

From the expert's point of view, in the arsenal of the Ukrainian army, the "Iron Dome" will become "a useless and expensive toy."

“It is hard to imagine how many resources poor Ukraine will spend on the deployment of the Iron Dome.

In addition, it cannot be ruled out that the Americans, as in the case of the Javelin anti-tank systems, will limit the use of this missile defense system.

But Kiev, in order to serve the United States, will take any weapon that will be given to it, ”concluded Konovalov.