The US condemns the Russian elections: not a free and fair vote

The State Department denounces: "Limited political pluralism and restrictions imposed on citizens." And from prison Navalny writes: "The digital vote has overturned the results" 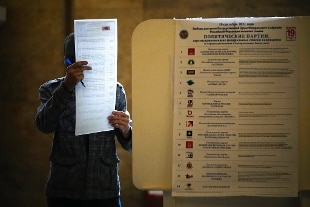 September 20, 2021 The US State Department condemned, in a press release, the result of the elections that took place in the Russian Federation from September 17 to 19.

"The Duma elections were held in conditions not conducive to free and fair proceedings", reads the official statement condemning the government for using "laws on 'extremist organizations',' foreign agents' and 'unwanted organizations 'which severely limited political pluralism and prevented the Russian people from exercising their civil and political rights ".

The Department then specifies that it does not recognize "the holding of elections for the Russian Duma on Ukrainian sovereign territory", reaffirming "unshakable support for the territorial integrity" of the country. The statement adds that "independent political figures", the media, but also the observers of the Organization for Security and Cooperation in Europe (OSCE) who had to certify the transparency of operations were marginalized. Vladimir Putin won a large electoral majority, but organizations affiliated with opposition leader Alexei Navalny were banned. In addition, Apple and Google had to eliminate Navalny-related voting apps after the Kremlin threatened to arrest their employees.

Navalny: "The digital vote is bogus, it overturns the results "

And from the prison where he is locked up, the opposition leader adds to the dose with an Instagram post: "The 'robot' is thinking for a long time. In the 2019 elections, this 'robot' has published the results instantly, but now He is thinking. It is clear why. As far as I understand, according to the data from physical polling stations, it can be seen that in Moscow the candidates of the 'Smart Vote' won in 11 out of 15 constituencies and in St. Petersburg in 7 out of 8. the robot thought about it, lit a cigarette and decided to slow down the publication while waiting for the cunning hands of United Russia to falsify the results into completely opposite ones ".