The infected question about the rubbish heap in Marhult's future has now led to two police reports - after an incident in a grocery store in Lenhovda. The two buyers for the property smoked together with one of the municipality's officials, and now the official has had to leave his assignment. 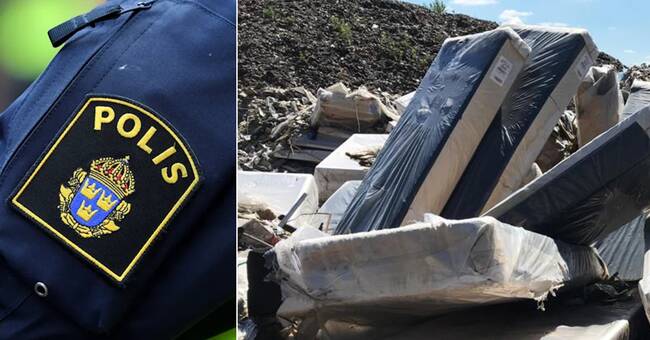 The giant rubbish dump in Marhult, where 32,000 tonnes of rubbish was dumped, is located on an old industrial site that was previously owned by a male doctor in his 60s.

He has now sold the property to two men in their 55s, who want to build a business park in the area.

Prior to the purchase, which went through last Friday, the two buyers sat in meetings with Uppvidinge municipality's environmental and building administration to discuss the handling of the rubbish and the ground down car parts (called fluff).

One Thursday in early September, municipal officials came to the dump to take samples, but were not allowed into the area by the two men, as they lacked safety helmets and protective clothing.

A discussion about who actually had the right to enter the property arose, after which the municipal officials left the place.

Removed from the case

Later in the evening, the two buyers and one of the officials met in a grocery store in Lenhovda.

There is disagreement about what happened next.

According to the two buyers, the official sought unprovoked contact with them.

- He's running after me.

First it was the incident of the day and then this, says one of the buyers to SVT.

But the official tells SVT that he was passive in the situation, and that it was he who was exposed to threats.

- It is very unfortunate, that is my basic comment, the official says to SVT.

The official has now been removed from the case, and two police reports have been made.

One police report concerned illegal threats, and the other threats against an official.

- I will not have anything to do with the case anymore, there are different security strategies for things like this, the official says.

The preliminary investigation into illegal threats has been closed, but the second report of threats against an official has been forwarded to the public prosecutor's office.

- In general, if someone is threatened, you will be removed from the current case.

It must be possible to assess the matter correctly, and we must protect our staff, says the municipality's head of administration Patrik Ivarsson.