Hell on La Palma 50 years later: "It hallucinates me and at the same time scares me very much"

The summer started with the end-of-year outbreaks that anticipated the fifth wave of the Covid and says goodbye with an event as striking as it is dangerous: the eruption of the volcano ... 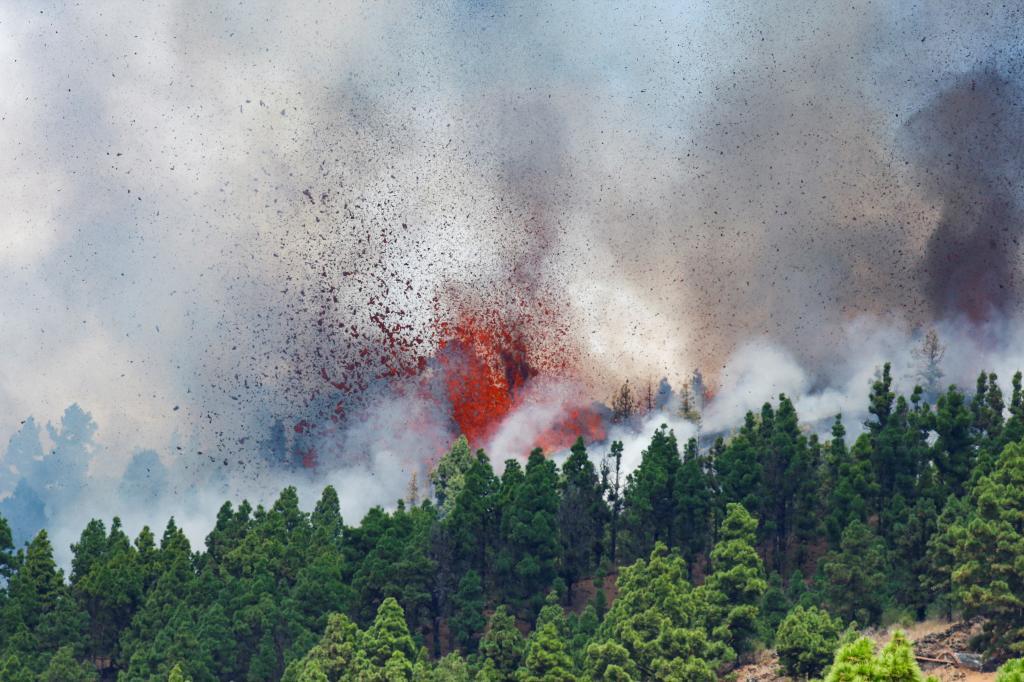 The summer started with the end-of-year outbreaks that anticipated the fifth wave of the Covid and says goodbye with an event as striking as it is dangerous: the

eruption of the La Palma volcano

, which occurred yesterday at around 3.15pm (local time, one more in the Peninsula), after eight days in which thousands of small earthquakes were registered.

More than 5,000 people had to be evacuated

yesterday night, due to the risk posed by the rivers (streams) of lava that descend into the sea.

It is the first volcanic eruption in Spanish territory that we are following live,

, professor of Geology at the University of Salamanca.

The eruption, located in the Cumbre Vieja Natural Park, has been relatively mild, and could be classified, apparently until now, in a volcanic explosivity index of 1 or 2, on a scale that goes from 1 to 8.

For the moment, the authorities fear damage to homes and other property, but are confident that there will be no regrets for damage to people.

Therefore, they insist on the need to maintain prudence and not approach the affected areas.

that the volcano expels are toxic and potentially lethal, experts warn. Another of the secondary effects was the fire declared yesterday in the pine forest that surrounds the volcano, although the rapid intervention and the absence of wind contributed to the fire not getting out of control.

The main fissure through which the lava is escaping measures about 250 meters, and has different emission points. In fact,

expelling lava at the same time, although the number is constantly changing, because some openings merge with others and new ones emerge. In the end, they will form a large volcanic cone, similar to the image we all have in mind of a volcano. At the moment, these are several openings of variable number and located along the fissure, through which the lava escapes.

An eruption of these characteristics, recalls Professor Silva, "is not unusual."

In fact, "there have been several in the 20th century", both on La Palma and El Hierro.

«They are the youngest islands.

La Palma emerged from the bottom of the sea, stuck its head out, about two million years ago, and El Hierro, about 800,000 years ago, ”explains Silva.

What they have to do is grow.

They will continue to grow and we will have volcanic eruptions

, several every century, some smaller and others larger.

At the moment, none have been of very large dimensions.

The material that the volcano expels had already formed yesterday afternoon what is known as a cone of pyroclasts (the solid fragments that come out next to the lava) about 25 meters high, which stood out as a kind of black hill on the pine trees surrounding the fissure.

were declared emergency level 2, or red traffic light, shortly after the eruption occurred.

«Only on Sunday there were at least

, of which 86 were located, one of them with a maximum magnitude of 3.8 mbLg [seismic magnitude scale], which occurred at 10.16 UTC [11.16 in the Canary Islands], widely felt on the island and with a depth of two kilometers.

According to the Canary Islands seismic network, this earthquake was 4.2 ”, explains

, PhD in Physical Sciences, Master in Geophysics and head of meteorology at eltiempo.es.

That earthquake was the one that accelerated an eruption that experts had expected for days, although they could not know exactly when it would occur.

It is spectacular, but, if you compare it with other volcanic eruptions, such as Pompeii, it has nothing to do with it.

“There were two clear signs that seemed to be pointing to the fact that this seismic swarm was related to volcanic activity and not to plate tectonic movements. The first one was that the island's surface had deformed 15 centimeters since the beginning of the seismic series, ”says Gómez.

“The second, that the Volcanological Institute of the Canary Islands located a

in the interior of Cumbre Vieja. This pressure of the magma in the subsoil is what produces the deformity of the ground, “he continues. In this sense, he clarifies, when earthquakes occur closer and closer to the surface, we are faced with "an indication that the magma wants to come out." The deformation of the ground observed occurs precisely because of this: "Because the magma, when rising, wants to cause an opening." Once the process begins, "you cannot determine how long it will last or what will happen," says Gómez.

"As it is being seen, although there is no data yet, it is a modest volcanic eruption", values, for his part, Silva Barroso.

"It is spectacular, but if you compare it with other volcanic eruptions such as

An outcome that was already expected, although not so fast

The scientific coordinator of the Volcanological Institute of the Canary Islands (Involcan), Nemesio Pérez, acknowledged yesterday that the eruption

has taken them "a bit of surprise", as it occurred "faster" than they expected

, and indicated that it may be terminated when several days pass without SO2 emissions. In statements to Televisión Canaria, collected by Europa Press. Pérez clarified that, although they knew that the probability of an eruptive phase was greater than in previous days, they still had the uncertainty of when.

«This has just begun ... Anyway, from what we have seen of the seismicity and all the earthquakes that there have been, that more or less give us an image of what would be the size of the magma chamber that is feeding this eruption, it is not a very large amount of magma ”, the professor considers. "I mean,

don't expect it to be a very large eruption

; but, of course, that magma chamber is also feeding from below, so that as it is expelling magma, it is also feeding back. We see that it is small, but, if it continues for several weeks, a larger eruption will still mount.

To this day, nothing can be assured

"The Canary Islands are a hot spot, like Hawaii."

As the plate of the African lithosphere, on which they are located, moves, new islands will appear, and others will continue to grow, as La Palma will do for the next million years.

The latest information from last night referred to the arrival of 64 soldiers from the UME to La Palma, where Pedro Sánchez, President of the Government, was also present to find out first-hand about the situation.

After more than 25,000 small earthquakes that have not stopped shaking La Palma for eight days and that

had raised the island 15 centimeters

, the magma that was pushing under the ground made its way.

At 3:10 p.m. the eruption of Cumbre Vieja began, in the municipality of El Paso.

It was then that the Volcanic Emergency Plan of the Canary Islands (Pevolca) raised to level 2, which means red traffic light, the alert level that reaches the municipalities of Tazacorte, El Paso, Fuencaliente, Mazo and Los Llanos de Aridane.

Already early in the day the evacuation of people with reduced mobility began.

"The transfer has been carried out without incident and the general condition of all the evacuated people is good," explained the Ministry of Health.

Due to the proximity of the lava, in the afternoon, the evacuation of more than 5,000 people began in the affected municipalities.

UME agents and other emergency personnel went to the Cabeza de Vaca forest area to attend to those affected.

The Emergency Plan warned of the risk of inhaling volcanic ash.

Likewise, 112 Canarias reported that Environmental personnel from the Cabildos of Tenerife and Gran Canaria, and Firefighters of Gran Canaria -before those of Tenerife-, in addition to the Canary Police, will be added to the emergency operation.

The Civil Guard estimates that up to 10,000 people will be evacuated.

"It hallucinates me and at the same time gives me a lot of fear,"

María del Pino Hernández, one of the residents evacuated in Los Llanos de Aridane, told EFE, aware that she is witnessing "an incredible spectacle, which gives panic."

In addition to evacuating the affected towns, the Canarian authorities closed the roads in the affected area to traffic and suspended school activities in El Paso, Los Llanos and Tazacorte for today.

La Palma airport remained operational, but some flights were diverted to Tenerife

and the evolution of the ash cloud was monitored.

In an eruption like this, as explained by the volcanologist Joan Martín, from the CSIC, the explosive part is not very important and the little pyroclast (incandescent rocks) that is observed will accumulate in the exit area.

The only problem can be the gases that escape with the magma and that can be derived from sulfur and CO2, which can cause breathing problems.

5,000 evacuees, eight houses affected by lava and fear of the advance towards the coast