The election to Russia's parliament is now coming to an end

On Sunday evening, the election for the lower house of parliament of the Russian parliament ends. Few expect any other way than that the United Russia party, which has been in power in the Duma since it was formed in 2003, will continue to rule. 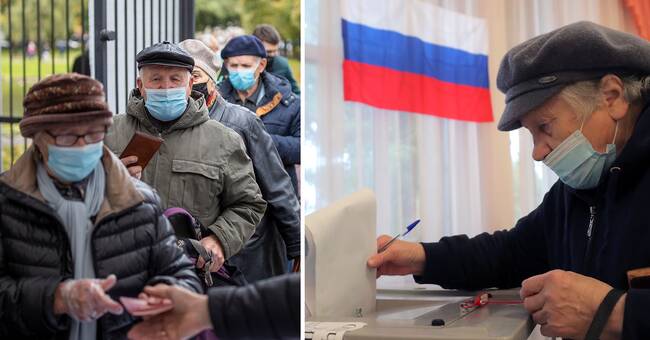 Since last Friday, Russians have been able to vote in both the lower house election and the municipal election.

Analysts believe that President Vladimir Putin's United Russia party will be able to retain the two-thirds majority required to facilitate changes to the constitution.

But the support from the people seems to have waned.

According to opinion polls, United Russia's support has fallen from 40-45 percent before the last election in 2016 to around 30 percent now.

The election has been marked by accusations of electoral fraud.

Most of the opposition has been stopped by a number of different methods, including with the help of a law that everyone who receives help or support from other countries is classified as "foreign agents".

The law means that persons or organizations that receive the stamp must report all transactions and payments to the authorities at least four times a year.

Since 2017, the law also applies to media companies, which has led to several leading independent newsrooms being classified as "foreign agents".

Violation of the law leads to high fines or that the site is blocked.

On the same day as the election began, the app "Smart voting" developed by the imprisoned opposition politician Alexei Navalny from the App Store and Google Play disappeared.