Naples. Miracle of San Gennaro is repeated, blood has melted

It is the first feast of the patron saint for the archbishop of Naples Monsignor Domenico Battaglia, who entered the Neapolitan diocese last February 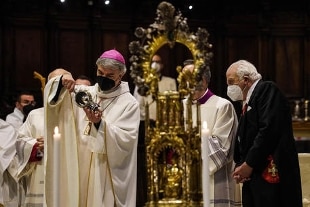 September 19, 2021The miracle of San Gennaro is repeated. At 10 o'clock the archbishop of Naples, Monsignor Domenico Battaglia, announced to the faithful present in the Cathedral that the blood of the patron saint had been liquefied. The announcement was accompanied by the traditional waving of a white handkerchief by a delegate member of the Deputation of San Gennaro.

"'We thank the Lord for this gift, for this sign so important for our community". These are the first words spoken by the Archbishop of Naples, Monsignor Domenico Battaglia, after the announcement of the miracle of the liquefaction of the blood of San Gennaro.

"It is nice to gather around this altar - added Battaglia - to celebrate the Eucharist of life and to ask for the intercession of St. Gennaro, so that we can fall in love with life and the Gospel more and more. We do not always succeed because life it is marked by weaknesses and fragility ". For Monsignor Battaglia it is the first feast of San Gennaro in this capacity, having been appointed archbishop of Naples last February.

The ampoule containing the blood of San Gennaro was brought by the archbishop from the Chapel of the Treasure of San Gennaro to the altar of the Cathedral. Already during the journey, the blood appeared to melt in the eyes of the faithful who greeted the event with a long applause. Faithful who in this difficult moment, turning to the Saint, asked to "help them overcome the pandemic". For the second consecutive year, due to Covid-19, the capacity inside the Duomo was limited. This year there were about 450 seats inside, while around 200 outside in the churchyard.

It is the first feast of San Gennaro for the archbishop of Naples Monsignor Domenico Battaglia, who entered the Neapolitan diocese last February. Last May 1st (the Saturday preceding the first Sunday in May is one of the three dates on which the miracle is expected together with September 19th and December 16th) the "miracle" did not occur. The miracle of May then occurred the next day, at 5.18 pm on 2 May, almost at the end of the second day of prayer. The last time the prodigy did not occur was on December 16, 2020.