The history of the volcano that is currently erupting in the Canary Islands is kind, but there is no trust in the volcano. 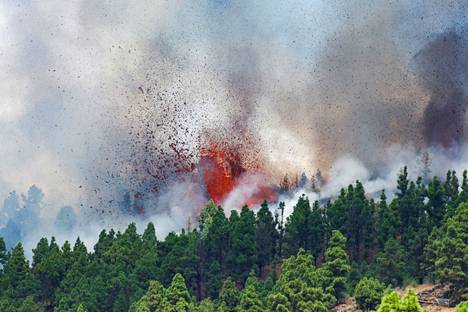 In La Palma, in the Canary Islands, the history of the volcano that began to erupt on Sunday is pretty harmless, but you can’t lull on it.

- When a volcano starts to move, it is difficult to predict it, volcano researcher Arto Luttinen, Senior Curator, reminds of the University of Helsinki's Central Museum of Natural History.

Read more: Live broadcast: Lava showers plunge from a volcanic lumen in the Canary Islands, more than a thousand are evacuated - IS follows

The most threatening, though unlikely, view concerns the flooding of a volcano on the island into the sea.

- The risk of collapse applies to all volcanoes, Luttinen says.

If a volcano or part of an island around a volcano were to capsize into the sea due to an eruption, a landslide could wreak havoc on a devastating tsunami.

Large landslides in oceanic volcanoes are very rare, but they cannot be completely ruled out.

The fluidity of the lava of La Palma volcano is shown in the figure.

It prevents the formation of an explosive discharge.

It is estimated that the devastation could be significant.

- Large landslides in volcanoes in the sea are very rare, but they cannot be completely ruled out.

La Palma has traces of a landslide that occurred during an ancient volcanic eruption, Luttinen says.

If the threat of a landslide associated with the eruption is ignored, the eruptions of the La Palma volcano have been calm.

The La Palma volcano has erupted on average every 50 to 100 years.

The previous active period coincided with 1971. Serious sanctions were avoided.

- The history of the eruption of the volcano has a good predictive value, Luttinen says.

Lava plunged high into the air in the evening.

The strength of volcanic eruptions is measured on a scale from 0 to 8, which describes the amount of material ejected into the air, where the addition of one unit means a tenfold increase in the amount of eruptions.

The force of eruptions that sow great destruction is on a scale of 5 to 8.

- La Palma eruptions have typically been of class two.

There are two main reasons for the tranquility of La Palma.

First, volcanic lava is basanite in composition, which is very fluid as an alkaline rock melt.

The gases contained in the lava of La Palma volcano escape from the molten rock.

- It is well visible in the pictures taken from the volcano.

Read more: Dramatic images of a volcanic eruption in La Palma - lava glowing like fiery red bursts into the air

Silicon makes the lava rigid and helps it solidify into a plug in the discharge channel.

That’s when a volcano can explode, as happened in the Pinatubo eruption in 1991.

Another reason for the calm is the gas composition of the lava.

The lava of the La Palma volcano contains little gas and can escape from the molten rock.

The third reason relates to the location of the volcano La Palma.

- The lava of the La Palma volcano comes from very deep, its origins can reach a depth of 60 to 100 kilometers.

The lava is very warm, about 1,000 degrees and therefore flowing, Luttinen says.

High temperatures are typical of volcanoes like La Palma, located on top of a so-called hot spot.

Their magma tank receives heat from very deep inside the earth and lava is flowing.

In contrast, volcanoes located in the collision zone of continental shelves are highly explosive.

They receive lava replenishment from the seabed penetrating under the continental shelf, which makes the lava generated in the collision zone siliceous and thus rigid.

Silicon-containing rhyolite, resembling volcanic granite, found in explosive, spectacularly erupting volcanoes, can be so rigid that it rises from the volcano in one pin.

In addition, the infiltration of the lithosphere by continental matter lowers the temperature of the lava, which also makes the lava solid movements of volcanoes operating in the collision zone.