Al Ameri: Mohamed bin Zayed is a source of inspiration for the sons of the nation

His Highness Sheikh Mohamed bin Zayed Al Nahyan, Crown Prince of Abu Dhabi and Deputy Supreme Commander of the Armed Forces, met with the Emirati doctoral researcher at the Zayed Center for Research in Rare Diseases in Children in London, Mohamed Al Ameri, a candidate for a PhD in epigenetics to diagnose 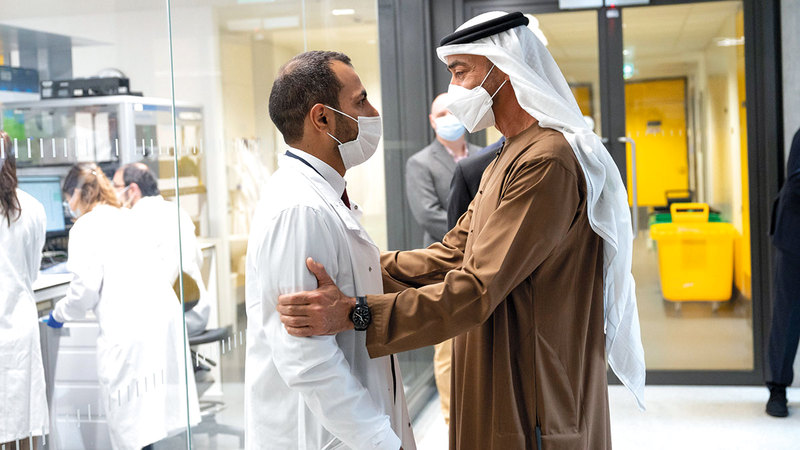 The Crown Prince of Abu Dhabi met him in London

Al Ameri: Mohamed bin Zayed is a source of inspiration for the sons of the nation

Mohamed bin Zayed during his meeting with Al-Amiri at the Zayed Research Center.

His Highness Sheikh Mohamed bin Zayed Al Nahyan, Crown Prince of Abu Dhabi and Deputy Supreme Commander of the Armed Forces, met with the Emirati doctoral researcher at the Zayed Center for Research in Rare Diseases in Children in London, Mohamed Al Ameri, a candidate for a PhD in epigenetics for the diagnosis of leukemia in children. From University College London, and His Highness’s praise for his valuable research on how to modify the DNA of cancer cells provides great stimulus and unlimited support.

Mohammed Al-Amiri confirmed to "Emirates Today" that the words of His Highness Sheikh Mohammed bin Zayed Al Nahyan, an incentive for success and excellence, especially since the great confidence given by the state's leadership and its belief that the nation's youth are the engine of change and makers of major transformations, is what makes the future, as it represents His Highness is an inspiring global model for the people of the country, indicating that he aspires to return to his dear and beloved homeland, the Emirates, and to transfer everything he learned abroad to raise and develop the field of rare diseases, so that the UAE becomes a global destination for treating various types of rare diseases around the world.

He said: "My feeling during the meeting with His Highness, the feeling of a son who saw a look of pride in his father's eye, that look gave me an incentive to move forward and persevere, and His Highness praised the presence of the sons of the homeland in exile with rare specialties to return to the homeland raising his banner in all forums, and at the end of the meeting he referred to me And he said: (You are Muhammad, the son of Muhammad), and this is an honor for me after which there is no honor.

Al-Amiri attributed the reason for choosing his specialization to his father - may God have mercy on him - who always urged him to research and investigate rare topics, in addition to his love for biology and solving puzzles, which made him passionate about genetics, which is one of the biggest mysteries in human science, pointing out that the Sheikh Center Zayed Research Center for Rare Diseases from the perspective of specialists is a mine of research.

He explained that, through his research, he seeks to reduce one of the problems facing children with leukemia patients, as the rate of recurrence of the disease again reaches 50%, and this percentage is a very large percentage, so he and the research team were able after matching the "DNA" of hundreds of patients. Using "machine learning", finding markers in the "DNA" that can give the rate of recurrence of the disease.

He pointed out that his research is not his first, as he has previously completed scientific projects, including his work as an assistant lecturer for a master's program in Genetic and Cellular Therapy, and with a group of doctoral students in the United Kingdom establishing a social institution called "UAE STEM in the UK", aimed at highlighting Highlighting UAE students in science, technology, engineering and mathematics disciplines in scientific forums in the United Kingdom, the most important of which is the Scientific Museum in London, in addition to spreading awareness in scientific disciplines and highlighting the interesting and interesting side in them.

He pointed out that alienation pushes him to take responsibility on a personal level and makes him work more to compete with the smartest minds at the scientific level, pointing out that his hobbies while abroad include running and enjoying watching nature in London, and enjoying gathering with his friends and classmates to discuss and benefit from different cultures, in addition to To gather with the sons of the Emirates in London, where they form one family in exile, and celebrate special occasions such as Ramadan, Eid, and National Day.

He stressed that despite the Corona pandemic, he benefited from the period of national sterilization to continue his research, as he worked and focused on the technical aspect of his research, which he could work on away from the laboratory, in addition to exploiting the conditions of home quarantine by making use of his time and joining a course. Computer programming in the (R) language in the field of genetics, in addition to participating in one of the most important experiences he has been through, which is joining as a volunteer in the laboratories for diagnosis and examination of "Covid-19".

His Highness Sheikh Mohamed bin Zayed Al Nahyan, Crown Prince of Abu Dhabi and Deputy Supreme Commander of the Armed Forces, visited last Friday, the Zayed Center for Research in Rare Diseases in Children in London, on the sidelines of His Highness's visit to the United Kingdom, and met His Highness, during the tour. Mohamed Al-Amri, researcher at the Zayed Research Center.

Al-Amri seeks to modify the DNA of cancer cells to treat cancer patients.

Mohammed Al Ameri: "I aspire for the UAE to become a destination for treating various types of rare diseases."