Virtual climate summit, Biden: "The UN report is a red code for humanity"

"If we continue with current policies, we will reach nearly 3 degrees of global warming by the end of the century. The consequences of such a rise in temperatures would be catastrophic," said Prime Minister Mario Draghi in a video message. 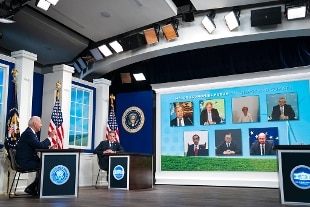 September 17, 2021 At the White House the virtual summit on climate and energy promoted by Joe Biden with the major economies in the world. The expected objectives include a commitment from the US, the EU and other countries to reduce their use of methane, a powerful greenhouse gas. The summit comes less than two months before COP26, the UN conference in Glasgow where nearly 200 nations are expected to announce more ambitious emissions cuts than previously set to avoid global warming.

"We must act and we must act now against climate change": US President Joe Biden said this when opening the proceedings of the Mef, Major Economies Forum on Energy and Climate, in which at least seven world leaders participate, including British Prime Minister Boris Johnson .

Biden cited the recent UN climate report, stressing that it "represents a red code for humanity".

In the past two weeks, he recalled, "I have traveled around the United States and have seen the disasters created by hurricanes, floods and fires, all phenomena that have occurred in many other areas of the world."

Biden then claimed the new role of the US in the battle for the climate: "The United States is once again protagonist in tackling the climate crisis. The time to act is short and we are close to a point of no return". The US president also explained that "the climate crisis also represents a great opportunity to create jobs".

"If we continue with current policies, we will reach nearly 3 degrees of global warming by the end of the century. The consequences of such a rise in temperatures would be catastrophic." This was stated by Prime Minister Mario Draghi in a video message sent to the climate summit convened by US President Joe Biden.