This is how the Madrid theater of Nacho Cano will be: an Aztec pyramid next to the M-40 and 400 parking spaces

The theater that Nacho Cano is going to build in Madrid will be shaped like an Aztec pyramid 30 meters high, a patio with more than 1,300 seats and a parking lot with capacity for ... 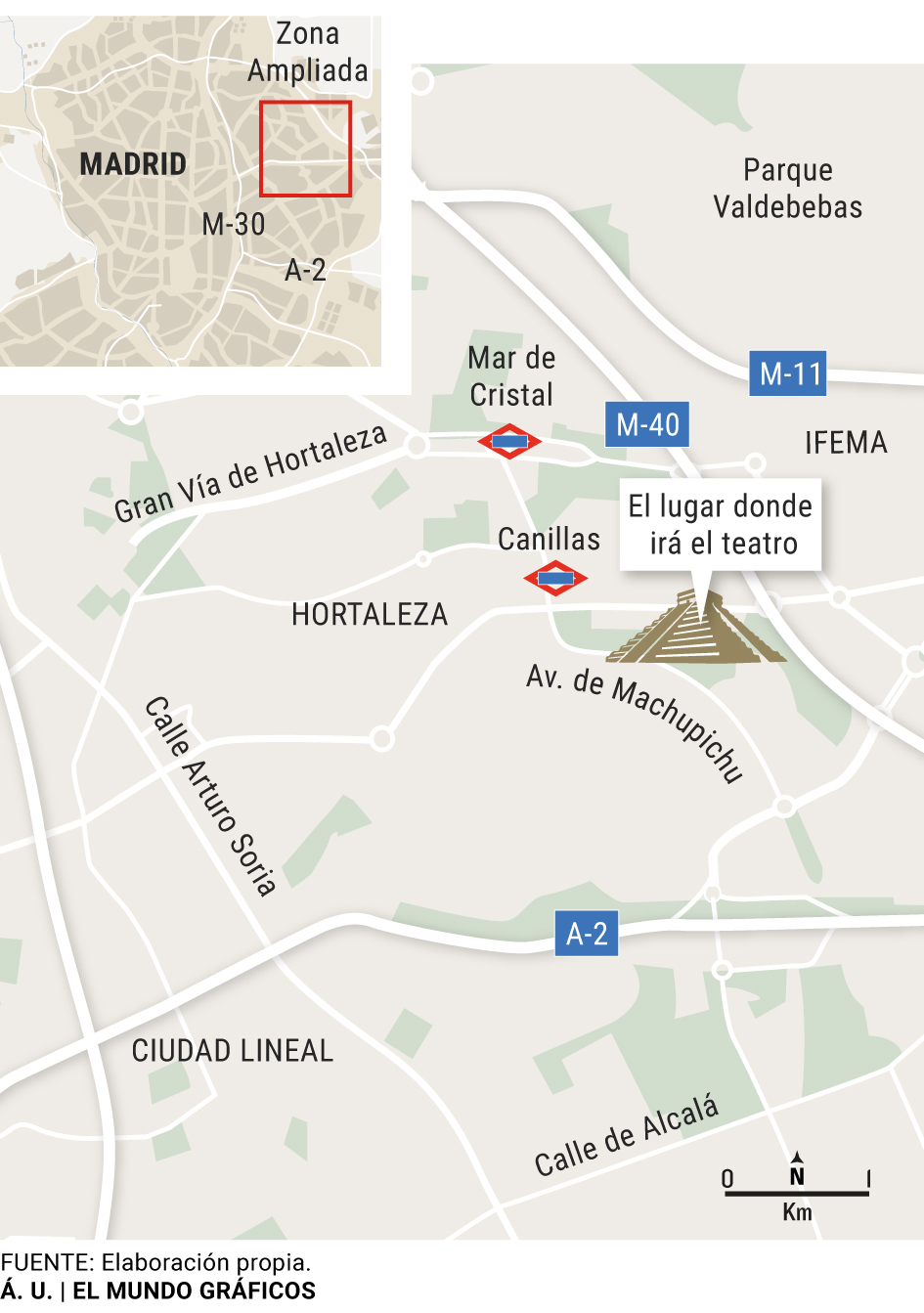 , a patio with more than 1,300 seats and a parking lot with capacity for 400 vehicles. The City Council of the capital has already authorized the first phase of the works, which involves only the movement of earth and the foundations, while processing the file for the second, which includes the execution of the rest, so in the Urban Development Area they warn that the project "may still undergo changes."

, the district newspaper in which it will be built on municipal property located at number 30 of the avenue of Machupichu, very close to the M -40. In the environment of the former member of Mecano they confirmed to EL MUNDO that, at the expense of possible modifications, that is the idea that is being worked on at the moment.

In order to carry it out, the Madrid City Council has made a transfer of the use of the plot in question, with an area of

, for a maximum period of four years in exchange for an annual fee of 450,000 euros. The successful bidder of the same has been the company Malinche The Musical Spain SL, of which Cano is the sole administrator and who alludes with his name to the woman who helped Hernán Cortés in the conquest of Mexico, hence the pyramid shape Aztec that the theater will have.

From the coalition government of PP and Ciudadanos they specify that, like any other endowment, "it includes

"This is so by law and is applied to all projects", underlines a spokeswoman for the Urban Development Area, where they consider that this private initiative is "vital" because it allows "transfer of culture to the peripheral districts" of the city "to through the arrival of a great production ».

The new theater will cost more than

and it is estimated that the works for its construction will last for nine months, according to

This newspaper has tried, without success, to contrast this point.

The spokeswoman for Más Madrid in the Consistory, Rita Maestre, described this Thursday as a "scandal" that the City Council allows the execution of a work that "does not correspond to any need in the district."

Likewise, he condemned the transfer of the lot "without public competition" to Cano, "a businessman friend of the PP, who hosted the personal vacation of the president [of the Community, Isabel Díaz] Ayuso, after she gave him a prize [the Grand Cross of the Order of the Dos de Mayo] that became a rally in their favor, ”reports Efe.

If this project goes ahead, the new theater will be built on the same municipal land where the ventriloquist and businessman José Luis Moreno - currently accused of a crime of fraud and money laundering - planned in 2002 to

: a monumental building with three floors, capacity for 6,000 spectators and an investment of 164 million euros in which not a single brick was placed.

In the Regional Federation of Neighborhood Associations of Madrid (Fravm) they demand that this land be used for public facilities, such as the construction of an institute for the Piovera neighborhood.

«Today there is no provision by any other administration to make any new provision from the educational or health point of view and, therefore, we understand that the best use to give this plot is cultural, because we understand that it is what the district of Hortaleza deserves ”, justified the Urban Development delegate, Mariano Fuentes, last August when EL MUNDO advanced the construction of the Nacho Cano theater.

Floods, outages and floods: the Dana causes havoc throughout Spain

Histories 'Maravilla' returns Martínez: "I am so hungry for triumph that I would eat a whole buffalo"