Hard debate about politicization in the church

A campaign organization for the Social Democrats or an open and inclusive church that is threatened by right-wing nationalism? Church politicians from the Sweden Democrats and the Social Democrats expressed widely differing views on the state of the Church of Sweden when they met in a debate before the church election in Aktuellt. 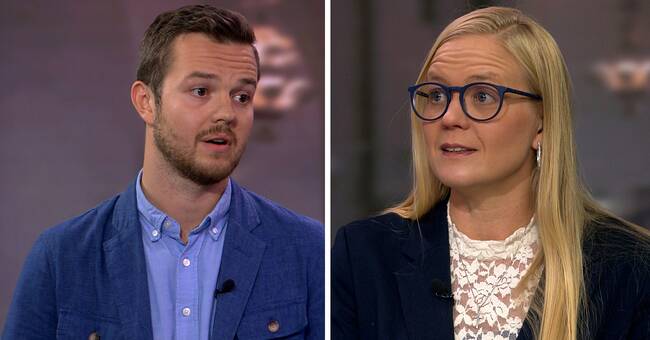 - This is an influence that has taken place for a very long time, since the '68 movement, says Julia Kronlid, Member of Parliament and member of the Church Assembly for the Sweden Democrats.

She believes that the church has been politicized and that there are great similarities with the policy pursued by the Social Democrats in the Riksdag.

- The Church of Sweden takes a very clear position in the migration debate, for example to grant amnesty to people who have no grounds for protection and that the church has hidden migrants who are here illegally, she says.

Eneroth: The message of love the foundation

Jesper Eneroth, group leader for the Social Democrats in the church meeting, did not agree.

- For many decades, we have had a fairly large consensus in church policy between the various groups, but that changed with the entry of the Sweden Democrats.

When we talk about the open folk church, we are talking about an inclusive Christianity based on the Christian message of love.

When the Sweden Democrats talk about the national church, they talk about a people, a church, a nation, he says.

- You are not conservative, you are radical nationalists, says Eneroth.

The marriage issue for debate

Part of the debate was devoted to the high-profile issue of priests' obligation to marry same-sex couples.

The parishes do not have the right to say no, but individual priests are allowed to do so - something that several nomination groups want to change.

Eneroth said that it is obvious that all priests should follow the church's line not to differentiate between same-sex and bisexual couples, and pointed out that the Sweden Democrats voted against this order in 2009. Kronlid, for his part, referred to Archbishop Antje Jackelén saying that the issue is a non-problem and meant that no one in practice is discriminated against.

According to Jackelén, the priests' obligation to marry is a matter for the bishops, which means that the church council has no mandate to decide on the matter.