From billionaire to hospital physician: Who is in SpaceX's "all civilian" space lineup

China News Service, September 17-According to a report by the British Broadcasting Corporation (BBC) Chinese website, on the evening of the 15th local time, SpaceX successfully sent the "Dragon" spacecraft into space. This project is called "Inspiration 4", and 4 non-professional astronauts will fly in orbit around the earth for 3 days. At 8:02 pm on September 15, local time, the "Falcon 9" roc 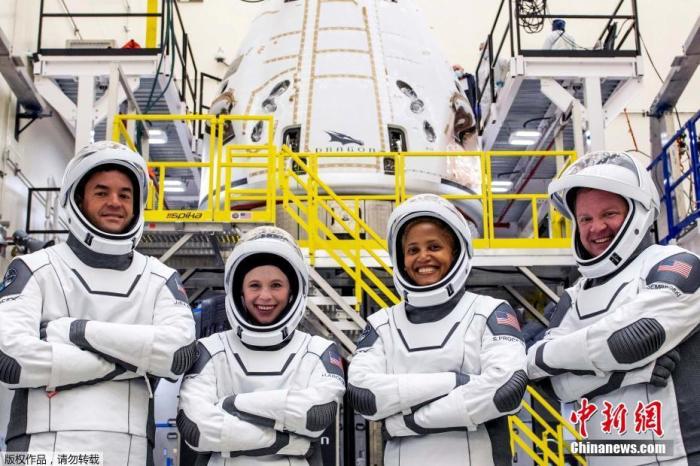 China News Service, September 17-According to a report by the British Broadcasting Corporation (BBC) Chinese website, on the evening of the 15th local time, SpaceX successfully sent the "Dragon" spacecraft into space.

This project is called "Inspiration 4", and 4 non-professional astronauts will fly in orbit around the earth for 3 days.

The four non-professional astronauts on the spacecraft will fly around the earth for three days.

The picture shows a group of 4 members of the aerospace "civilian group".

["All civilians" lineup: from billionaire to hospital physician]

According to reports, this is the first "all civilian" space journey.

Esekman made a fortune by developing a credit card payment system.

However, in his opinion, the real meaning of this flight is not just "outing with fishing partners".

So he gifted three adjacent seats to people with inspirational stories.

29-year-old Hayley Arceneaux may be the person who can best illustrate this point.

She defeated bone cancer since she was a child, and when she grew up, she returned to work at the St. Zudd Children's Research Hospital in Memphis, Tennessee, the medical institution that cured her.

Esekman hopes to raise 200 million US dollars for the Saint Zuider Hospital.

51-year-old Sian Proctor almost became a NASA astronaut, but was eliminated in the final round of selection.

Dr. Prokoto won the seat for his role as an artist and entrepreneurial skills.

She planned to look at the domed window of "Dragon" while drawing.

42-year-old Chris Sembroski is a U.S. Air Force veteran who works as an engineer at Lockheed Martin Airlines.

He donated a sum of money to Saint Zudd, which also gave him the opportunity to participate in the fourth class lottery.

Sembrosky did not win the lottery, but one of his friends won and asked him to take his place.

The four have been intensively trained at SpaceX for 6 months.

However, the on-board computer system will control their "Dragon" capsule, and SpaceX's ground team will monitor it.

"Dragon" will not be near the International Space Station.

It is in "free flight" with a target altitude of 575 kilometers.

This is about 150 kilometers above the orbiting laboratory, roughly equivalent to the height of the Hubble Space Telescope observing the universe.

Even if they don't have a destination, the four have enough tasks to keep them busy.

They are conducting scientific experiments in the space capsule, and SpaceX has also modified their temporary residence and added a large window. Astronauts will definitely use this large window to look at the earth below during their breaks.

At 8:02 pm on September 15th, local time, the "Falcon 9" rocket carried the "Inspiration 4" spacecraft and ignited from the launch pad 39A of the Kennedy Space Center in Florida, USA.

The four non-professional astronauts on the spacecraft will fly around the earth for three days.

[A milestone in the space tourism market?

This launch is another milestone in the space tourism market, which has begun to recover after ten years of stagnation.

Earlier this year, billionaire Richard Branson and Jeff Bezos took their own space vehicles into space.

After the "Inspiration 4" mission, there will be two private spacecraft visiting the International Space Station: one of them will carry a Russian film director and an actress in October, and the other will be early in 2022. .

In the 2000s, several super-rich people stayed on the International Space Station for two weeks.

In 2009, spare seats on Russian rockets were bought for use by NASA astronauts, and this special era of space tourism ended.

The second era seems to have more opportunities for development, because more private space companies are competing for this business, which should lower prices for a wider customer base.

Esekman regards "Inspiration 4" as an indicator of the development of the event.

He very much hopes that his "dragon" can fly higher than an astronaut.

Since Hubble's last maintenance mission in 2009, no one has reached an altitude above 570 kilometers.

"We have been to the space station (420 kilometers) for a while, where incredible science, research, and results are being born. But if we are going to the moon again, to Mars or beyond, we have to Get out of our comfort zone and take the next step in that direction." "This is the reason (we chose altitude)."