Since his first appearance alongside Fouad Al-Mohandes in the role of the attorney's agent, Adel Imam managed to attract the attention of the public and critics, and the satirist Mahmoud Al-Saadani considered him an exceptional talent. 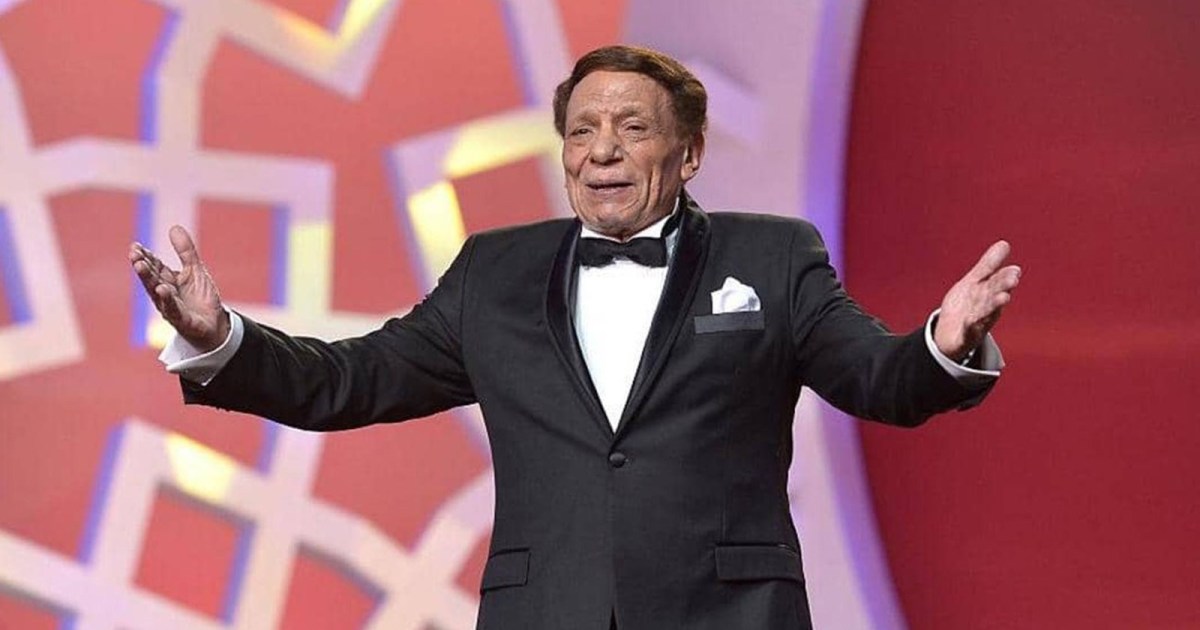 Adel Imam is one of the strange and amazing artistic phenomena in the history of Egyptian cinema and theater during the past half century, as he managed to remain at the box office for more than 40 years, during which he was full of hearing and sight in the cinema and theater, and recently on television through 8 consecutive Ramadan seasons.

Just as the generation of parents and the older generation found their laughter in Adel Imam in his famous recorded plays and in old and modern films, the generation of children born in the millennium finds the vocabulary of their new language (Mims) in the images and impressions of men taken from these films.

This success cannot be born by chance, but based on a state of constant development in reading the favorable conditions and choosing the roles that it plays;

Either on screen or on stage, to achieve his permanent rhetorical question from his role in the play of the rioters school "The leader of an onta, me or what?"

Since his first appearance next to Fouad Al-Muhandis in the role of a lawyer, Adel Imam managed to attract the attention of the public and critics, and the satirist Mahmoud Al-Saadani considered him an exceptional talent;

"Adel Imam is an artistic flair, no doubt, and his entry into Egyptian cinema is not an easy thing, especially in a market that does not recognize much talent and prefers shapes. A beautiful face is better than a smart mind, elegance is better than culture, and the craftsman is greater than the talented."

This is how Al-Saadani described Adel Imam and cinema 50 years ago, when he was a young actor, seeking to stay longer on screen or for a bigger role on stage.

Al-Saadani said about him in his book “The Laughers” in 1971, “If Adel realized how talented he is and how much he is needed, he would have escaped by himself from the ambush they had prepared for him, and if he had not escaped quickly from this corner crammed into it to the starring role; Richard Widmark and Clifton Webb, and juice from Tawfiq Al-Daqn and Al-Muhandis, and even if Adel fails to escape this fate, and even if your store remains a secret in the role of Al-Sunaid, this will not diminish his talent, nor will it degrade his position as a brilliant, talented and great artist.

Adel Imam certainly read this advice, and he certainly escaped from this ambush he referred to. Perhaps Imam was not able to implement it at the time, but he realized it when he had the opportunity after the performance of the play “The School of Rioters” in 1973 AD, which prompted his star to shine publicly.

Imprisoned by the naive person

Adel Imam was celebrating his 33rd birthday on the second night of the play "The Rioters School" in 1973, the play that wrote his birth certificate as a star after about 11 years of working in secondary and second roles, and his stardom has continued for about 50 years to this day.

In this play, Bahjat al-Abasiri asked, "The leader of Onta, am I or what?"

To continue answering the question for more than two-thirds of his life, and since the mid-seventies he has been working to confirm his stardom, which he started with starring in the movie "Searching for a Scandal" and as a naive young villager who seeks to win the heart of the heroine Mervat Amin.

But he will fall into the trap of the seventies and spend his fourth decade of life in her films of stark colors and popular themes that do not go beyond the realm of emotional and marital relationships, and remain imprisoned to present a group of films: “Happy marriage, forbidden on the wedding night, 24 hours of love, and everyone wants to love, and hello.” I am the cat, the search for trouble, soft sex, reckless husbands, and the passport of the air.But in the midst of this trap of light films that are too trivial and forgettable, Adel Imam presented one of the masterpieces of the comedic theater “Shahd Ma Shafsh Hajja” with the character of Sarhan Abdel Basir, which resembles His movie characters are also at this point, a naive, kind-hearted actor getting into trouble, but stage magic sided with him to deliver one of his most memorable roles before he turned 40.

The forties..a period of maturity and confidence

It seems that Adel Imam was trying to evade light comedy, heading towards tragic drama; He presented the character of Ibrahim Al-Tayer in "Dreams of the Flying Boy", the first series of writer Waheed Hamed's television series, which had only one movie in his credit, "The Bird of the Sad Night", to prove his success in the drama far from comedy, and begins to put it into consideration for successive works that do not center About the comedy of naivety, as he enters his fifth decade.

In his forties, maturity was an ally of Adel Imam's personality; He grew up and became a confident star who could refuse and choose between roles, after he accepted any role that was offered to him, so he performed one of his immortal tragic roles with Abdel Moneim Madbouly in “We are on the bus”, then he went to experience the drama in several forms, he presented “Hell” and “Winter Night” Warm”, but his public mark was in the series “Tears in Rude Eyes”, and the character of the Egyptian spy “Ahmed Al-Hawan”, known as Juma Al-Shawan, who achieved influence within every Egyptian house, especially with his national story and his case in the context of the Egyptian-Israeli conflict.

Certainly the success of the previous two films and the series helped him to set his feet on the drama path away from the comedy of the naive man, to open the eighties, which was a golden period for him, as he was a verified mass star who could get double his usual wage in return for agreeing to put the name of Nadia El-Gendy next to his name in Their only joint movie is "Five Door".

It seems that Adel Imam, during his forties, tried to follow Mahmoud Al-Saadani’s old advice to escape into the roles of the light-blooded villain and the cute quorum. We are the thief" and "One by One".

Time is the strongest competitor, so Adel Imam saw, and so he confirmed in his response to a question asked by the journalist Mofeed Fawzy about 30 years ago, while filming the movie "The Forgotten". The leader was then in his early fifties, coinciding with the early nineties, and it seems that time was a really strong competitor. After about 18 years of mass success and strong choices from the end of the seventies until the mid-nineties, the leader’s scales and criteria for his choices changed, in what could be considered a mid-life crisis.

Despite his strong and successful presentation of the movie "Birds of Darkness" in 1995, in the same year he presented a confused movie within his successful career, "Bakhit and Adela", to begin a phase of fluctuation in his success indicators and his cinematic and theatrical choices. He presented "Bakhit and Adela 2" in the same year, In which he presented "Sleep in Honey", then the movie "Message to the Governor", and his weakest plays "Body Guard", then "Al-Wad is guarded by the Minister", to end the era of the nineties with the movie "Hello America", which did not achieve the expected success, especially in The rise of the new comedy wave with its young stars: Mohamed Henedy, Alaa Wali El Din and Mohamed Saad; So that Adel Imam devote himself to the theater, he stopped filming in 2000 and 2001, before returning the following year with the movie "Prince of Darkness", which was a shy admission of his advanced age and his unsuitability for the roles of "screen boy" or "action star".

Always evolving according to circumstances

When the wave of comedies came at the beginning of the millennium, Adel Imam stopped appearing in cinemas for only one year, perhaps to re-calculate after several unsuccessful choices, the most recent of which was the movie "Hello America" ​​in 2000, in conjunction with the presentation of his play "Body Guard".

And starting from 2002 until 2010, Adel Imam’s presence did not stop from the cinema screen, but in new features that suit the new circumstances for him personally, namely, his advanced age, as a man in his sixties, but he is a wounded sixty, or sarcastic or playful, a loving father, or a miserable sixty He suffers from the change of times in the Cairo of the new millennium from the Cairo of the fifties where he lived, where "fashion descends here before Paris".

And even the sixties with Alzheimer’s, or so they portrayed him, in his last appearance on the cinema screen before the cinema map changed again in the wake of the January 25 revolution, to accommodate the leader with these new changes heading towards television drama, and from 2012 to 2020, the leader did not Adel Imam stops appearing on television except once in 2019, as he presented 8 series during that period, bringing him 16 series, including 12 of his starring.

Adel Imam does not have a declared political position, but he ridicules all political currents in his films;

He ridicules the left and its "stereotyped" figures, as well as the Islamists, as well as attacking the extremist groups that used violence as a means in the 1990s.

Perhaps this can be considered a clear position, but it is a social position rather than a political one, as it does not recognize political currents, but when the matter turned into a societal clash, he announced a clear position, as he did in the summer of 1988, when he decided to present his theatrical performance “Al-Wad Sayed Al-Shaghal” to the masses of Assiut Governorate, For two days free of charge, his income will be devoted to theatrical activity of the governorate located in Upper Egypt, in a position of solidarity in which Adel Imam is with an unknown group of theater enthusiasts founded by young people in a village called "Cody of Islam", who were attacked by one of the extremist groups in Upper Egypt and considered them among the people of Debauchery, so they tried to forcibly prevent them from performing a theatrical performance, using chains and saddlebags, so two people were killed and others were injured.