We are again at a change in weather between thunderstorms and falling temperatures and sunny days Bad weather in Como, Clooney on the field for aid Bad weather, Coldiretti: millions of damage in the fields Share September 16, 2021 Time is changing. The anticyclone begins to creak under the pressure of Atlantic disturbances that will swoop down on Italy like a runaway train. There will be two until the weekend, then others. The editorial staff of the site www.iLMeteo.it informs that in these 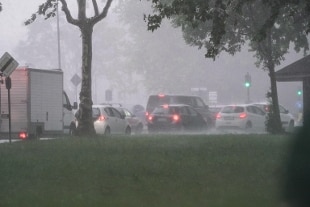 September 16, 2021 Time is changing. The anticyclone begins to creak under the pressure of Atlantic disturbances that will swoop down on Italy like a runaway train. There will be two until the weekend, then others. The editorial staff of the site www.iLMeteo.it informs that in these hours a first disturbed front is impacting the Northwest, the Alps, Emilia Romagna and Tuscany, subsequently it will extend and intensify also in the Triveneto. Rainfall is expected in these regions in the form of thunderstorms and local hailstorms and a further worsening of the weather in the evening and night. On the rest of Italy, apart from widespread cloud cover, the weather will be drier. On Friday the disturbance will leave the North, still affecting the Triveneto and in the morning also Tuscany,then descending on Lazio and Umbria and then Marche in the afternoon.

Over the weekend the second disturbance will arrive with other rains and local thunderstorms, especially in the north and upper Tuscany. The bad weather will move away from Italy for good on Sunday afternoon when the whole country will be kissed by the sun except for more clouds over the Triveneto. Definitely sunny weekend instead for the Center-South. The good weather will also continue in the first two days of next week, after which, just in conjunction with the equinox (Wednesday 22 September), autumn could break in with more rains and a marked drop in temperature.

Thursday 16. In the north: overcast sky with rains and thunderstorms, it gets worse in the evening and at night. Middle: bad weather in Tuscany, many clouds elsewhere. In the south: irregular clouds, hot weather.

Friday 17. In the north: last rains on Lombardy, Northeast, Liguria. In the center: showers and thunderstorms over Tuscany, Umbria and Lazio, then also Marche. South: dry, but a lot of clouds.

Saturday 18. In the north: new rains are coming, but less intense. In the center: unstable in upper Tuscany, more sun elsewhere. In the south: many clouds and some rain in Basilicata.

On Sunday still rain in the North, sunny on the rest of Italy.

A worsening of the weather conditions will occur on the Veneto between the central hours of today and the early hours of Friday 17th. ) due to hydrogeological criticalities, valid from 10.00 today to 8.00 on Friday 17. In this period of time, the forecasts indicate unstable / perturbed weather with scattered to diffuse rainfall, especially in the central-northern areas, including downpour or thunderstorm. Local intense phenomena are also possible, in particular strong showers.