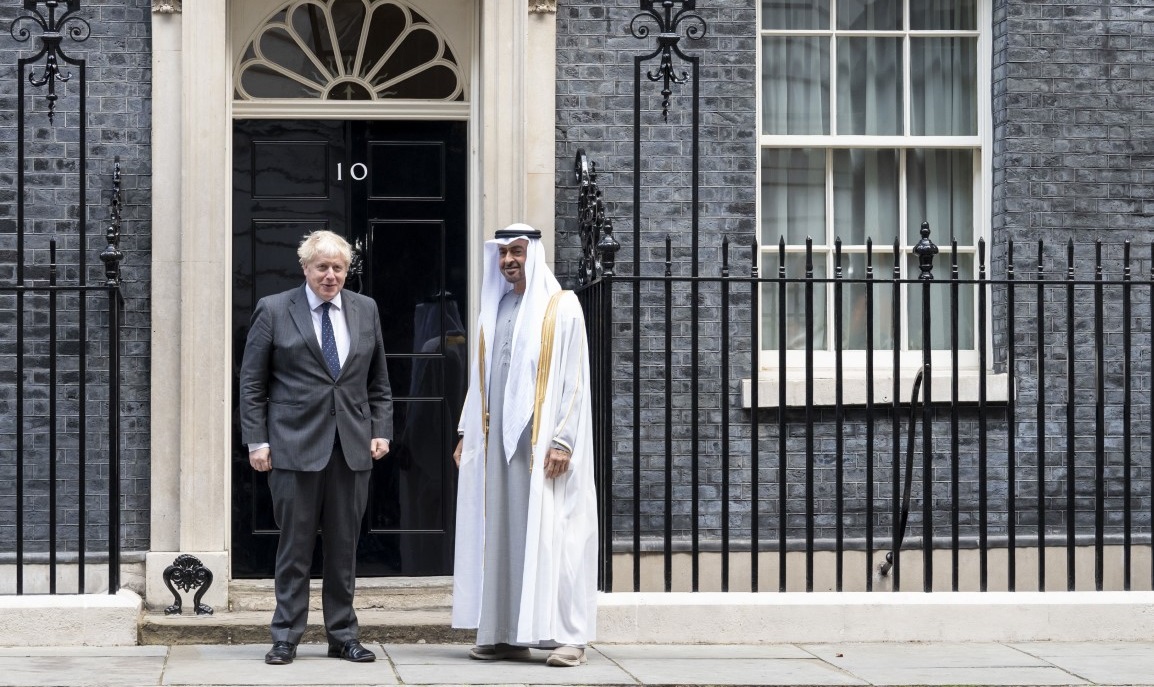 A joint statement was issued between the United Arab Emirates and the United Kingdom on the occasion of the visit of His Highness Sheikh Mohamed bin Zayed Al Nahyan, Crown Prince of Abu Dhabi and Deputy Supreme Commander of the Armed Forces, to friendly Britain.

Here is its text:

His Highness Sheikh Mohamed bin Zayed Al Nahyan, Crown Prince of Abu Dhabi and Deputy Supreme Commander of the Armed Forces, and British Prime Minister Boris Johnson met in London on September 16, in the presence of ministers from the UAE and the United Kingdom, as well as ambassadors and other officials from both countries.

The two sides agreed to establish a new and ambitious partnership for the future based on strengthening the historical relations between the two countries, which will form the basis of this partnership, which aims to enhance prosperity, well-being and security, address the issue of climate change and expand the exchange of knowledge, skills and ideas:

1. A partnership between the UAE and the UK for the future

1.1 The British Prime Minister extended congratulations to the UAE on the occasion of the fiftieth anniversary of its founding.. The two sides also welcomed the progress made by bilateral relations during this period, and expressed their high confidence in the future of these relations.. They affirmed the commitment of the two countries to address global issues.

The two sides noted the opportunities that emerged from the deep strategic relationship between the two countries, and the two sides also agreed to establish a partnership for the future to expand and deepen bilateral relations.

1.3 H.H. Sheikh Abdullah bin Zayed Al Nahyan, Minister of Foreign Affairs and International Cooperation and Minister of State for Foreign, Commonwealth Affairs and Development, will co-chair an annual strategic dialogue to review issues of common interest, and work closely and jointly during the UAE’s membership of the Security Council during the period 2022-2023.

The two sides discussed economic cooperation opportunities offered by the new sectors, including cooperation in the fields of technology, education, humanities, and clean and renewable energy.

2.2 The two sides welcomed the recent steps to increase the volume of investment flows between the two countries.

This long-term strategic agreement will be used to advance investment relations between the two countries.

Over the course of five years, the sovereign investment partnership will invest in four key sectors based on innovation, including technology, infrastructure, healthcare, life sciences, and clean and renewable energy, which will enhance the ability to create more job opportunities in both countries, enhance research, develop capabilities and create new areas. investment cooperation.

He announced the UAE's commitment to invest in the "Sovereign Investment Partnership" between the UAE and the United Kingdom in the amount of 10 billion pounds over the next five years in the areas of energy transformation, technology and infrastructure.

The two sides also welcomed the continued assistance of the British Business Bank.

They also discussed a number of projects under implementation under the Sovereign Investment Partnership, as well as plans to announce further investments in due course.

The two countries will work to expand and deepen this cooperation by concluding three new agreements:

2- An agreement between ADNOC and BP on the joint development of carbon capture, storage and use centers.

3- A forward-looking partnership between Masdar and BP to develop, build and operate urban energy and mobility services.

2.5 The two sides welcomed the conclusion of the UK-GCC Joint Trade and Investment Review in June 2021, and the progress made in enhancing intra-trade by removing trade barriers and barriers and facilitating economic cooperation.

They also agreed on the need to continue work in sectors such as education, health care and food through the UAE-British Joint Economic Committee, which was agreed to hold its next meeting during Expo 2020 Dubai.

2.6 The two sides announced the signing of a memorandum on joint cooperation in the field of industrial and advanced technologies between the Ministry of Business, Energy and Industrial Strategy and the Ministry of Industry and Advanced Technology.

The memorandum of cooperation focuses on 9 priority areas, including life sciences, hydrogen and space, emerging renewable energy technologies, and green and smart sustainable manufacturing, which will be implemented through partnership between government, companies and academia.

2.7 The two sides also referred to the signing of a memorandum of understanding on artificial intelligence to facilitate the process of knowledge transfer, investment and standards to achieve the mutual benefit of both countries.

2.8 The two countries will establish a joint space sector committee to stimulate bilateral discussions to achieve economic prosperity for the peoples of the two countries.

2.9 Both countries have built stronger industrial links through defense and security cooperation, including burgeoning relationships including the Balance Economic Council and the EDGE Group.

The two sides agreed to work together to support these emerging and future partnerships to advance prosperity while enhancing business opportunities for both.

2.10 The two countries have an important strategic defense relationship, and the two sides agreed to strengthen it, especially in the field of capacity development and defense industrial cooperation.

They also welcomed the continuation of the strong relations between the UAE and British armed forces.

The United Kingdom is looking forward to more cooperation with the UAE Presidential Guard, and between the two countries’ air forces through the United Kingdom’s participation in the Advanced Tactical Command Course, and the involvement of British aircraft from the Carrier Strike Group, in addition to increasing ground military exercises in the UAE.

3.2 The two sides welcomed the signing of the Memorandum of Understanding on Climate Change and Environmental Cooperation, which will enhance cooperation in climate action, nature-based solutions and the enforcement of the Paris Agreement.

The partnership will focus on sharing best practices related to climate neutrality, integrating climate and environment into development cooperation, reducing the risks of climate change, accelerating the low-carbon transition at the national and global levels, including by strengthening the mandate and functions of the International Renewable Energy Agency (IRENA), and mobilizing efforts to encourage financing climate and promoting the AIM for Climate mission, which will be launched at COP26.

4.1 The UAE and the United Kingdom renewed their commitment to deepening their strategic partnership in foreign policy, regional, security and defense issues, and announced the launch of the Strategic Dialogue, which will enhance cooperation in the fields of education, culture, climate change, multilateral cooperation, in addition to security issues.

4.2 The Prime Minister congratulated the UAE on its election as a non-permanent member of the United Nations Security Council for the period 2022-2023.

He stressed the commitment of the two countries to work together in the Security Council to promote international peace and security and to address security threats at the international level.

The two sides also discussed the long-term strategic implications of the global recovery from the (Covid-19) pandemic.

4.3 On regional issues, the two countries agreed to continue their close cooperation, including in the areas of security, development and humanitarian affairs.

They stressed the importance of the Brahimi Agreement in contributing to the strengthening of regional peace and security, and reaffirmed their commitment to a negotiated two-state solution to resolve the Israeli-Palestinian conflict, in accordance with closely related United Nations resolutions.

4.4 The two sides expressed their concern about the developments in the Afghan situation, and affirmed their commitment to maintaining regional stability and preventing the resurgence of terrorism.

They also stressed the need to protect the rights of Afghan women and girls and the importance of preserving their rights.

The two sides committed themselves to working together to prevent a humanitarian catastrophe in Afghanistan and to support refugees.

4.5 The two sides agreed to increase cooperation to ensure the safety and security of maritime trade and energy supply.

5.2 The two sides stressed that global cooperation and solidarity constitute the cornerstone in combating the pandemic and achieving sustainable and comprehensive recovery.

They welcomed the high rate of vaccinations in the two countries, and affirmed their commitment to sharing data and exchanging experiences, including genome sequencing.

5.3 The two sides agreed on the importance of supporting efforts to increase the supply of vaccines at the international level and recognizing the vaccines that are approved in both countries in order to strengthen cultural, trade and investment ties.

5.4 Both sides acknowledged the health impacts of the repercussions of the phenomenon of climate change and pledged to use the Conference of the Parties as a platform to demonstrate ambition and hope in addressing these repercussions.

They noted the importance of strengthening the World Health Organization and its leading and coordinating role with regard to the global health system.

The areas include climate change, education, women's empowerment and development in the Horn of Africa.

6.2 The UAE and the UK will build on their partnership to ensure quality education for girls for 12 years.” The two sides stressed the importance of using diplomatic and development means to support the implementation of the UN Human Rights Council resolution on girls' education.

The UK is looking forward to the Rehabilitation Summit at Expo 2020 Dubai as a major milestone on the girls' education agenda.

6.3 The two countries agreed on an ambitious plan for cooperation in areas of mutual interest, including the Horn of Africa.

To promote common priorities for security and stability, and to achieve sustainable development goals.. The two sides stressed the need to respect human rights in all initiatives.

7.1 The two sides agreed to increase cooperation in the fields of cultural heritage protection, development of creative and cultural industries, and exchange of best practices and experiences.

The two sides announced that a memorandum of understanding will be signed on the cultural sector, and work together to facilitate the implementation of international agreements such as those signed with UNESCO.

7.2 The two sides affirmed their desire to strengthen educational ties, and expressed their commitment to identifying and creating more opportunities for cooperation in the field of vocational and technical training.

We also announced the "Education for the Future Initiative", a series of seminars to be held during 2021, and welcomed the holding of the first event between the two countries on the value and importance of information technology and artificial intelligence skills and competencies in girls' education.

7.3 The Prime Minister expressed his aspiration for an active British participation in Expo 2020 Dubai, which will contribute positively to supporting dialogue, innovation, international peace and prosperity.

8.1 The two countries launched a partnership to combat illicit financial flows.. Both sides agreed that international partners should work together to tackle money laundering.

8.2 The first meeting of the partnership between the two countries will be held in London on September 17, 2021 to address the issue of illicit financial flows.

They will discuss the development and formulation of a joint action plan to reduce addressing risks and threats.

The meeting will also include the signing of the Partnership Framework to Address Illicit Financial Flows.