Of the Green Pass. Hope: "Push to restart". Brunetta: "It will strengthen growth"

"With this decree, starting from October 15, we extend the use of the Green pass throughout the world of public and private work. Vaccine, the key to a new season" 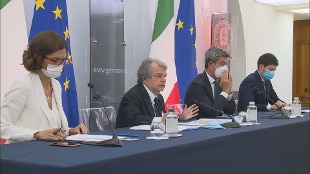 September 16, 2021 The new decree that "we have recently approved in the Council of Ministers is a very important piece of the Covid containment strategy implemented in recent months. It is a strategy that essentially focuses on the vaccine as a fundamental key to opening a new season. With this decree, starting from October 15, we extend the use of the Green pass throughout the world of public and private work ".

The Minister of Health Roberto Speranza, in the press conference that was held after the Council of Ministers, explains the spirit of the provision: "Create the conditions to better manage the months to come and help Italy in this important restart phase" . The decision to extend the use of the green pass to the whole world of work is made "for two fundamental reasons: to make these places safer and to make our vaccination campaign even stronger", whose "numbers are very encouraging. , but it is clear that an even more significant use of the green pass, such as the one we implement with this decree, we are sure it will help us even more to push this vaccination campaign ", said the minister.

With the dl on the green pass "we are following a strategy that focuses on the vaccine as the key to opening a new season. We extend the obligation of the green pass from 15 October to the whole world of work, public and private". On the swabs, the minister specified that the antigen tests will be free only for the exemptions provided for in the circular of the ministry of health and that work will be done to make the network of active pharmacies more widespread and capable of administering rapid antigen test swabs.

validity of the test to 72 hours only if molecular

Finally, the minister has I specified that by the end of the month "we will ask the CTS for an evaluation of capacities" for cinemas, theaters and sports.

Brunetta: "We have applied the school model"

"We have applied the school model to the public and private sectors, because the

it worked perfectly ", said the Minister of Public Administration Renato Brunetta." The fact that this measure will come into force on October 15 is a clear message: get vaccinated in these four weeks. The result could already be achieved in part at the beginning of the entry into force of the decree. There is a hurry because autumn arrives and the circulation of the virus increases and with this the probability that variants will form. "The novelty of the decree, said the minister, is that it affects the whole world of public and private work and for private dependent and self-employed, a group of 23 million workers. "

I agree with Professor Fauci

", Brunetta said again," with this decision Italy places itself at the forefront at the international level. We are growing by 6 points of GDP and this measure can only help the economy. "

Answering a question on

, the minister replied:" We aim for safety and maximum presence in the workplace to give strength to the recovery. Entire cities will reopen because there will be a return of face-to-face work. The procedures will be defined by the guidelines that will be adopted by Prime Minister Draghi ".

"There was ample sharing by local authorities, but above all awareness of the importance of the green pass. There may be an extension of activities and a decrease in restrictions. The governors have asked for correct information to avoid fake news that convinces people not to get vaccinated. We also established a controlled price for tampons, we asked that the cost of tampons for minors be 8 euros, and the extension of the value of the molecular to 72 hours ", said the Minister of Affairs regional Mariastella Gelmini.

"We cannot afford new restrictions in the fall," said Labor Minister Andrea Orlando. "We want people to get vaccinated, but we stop a moment before the obligation, which would polarize the positions even more. To go to work you will need the green pass, those who need a tampon to work will have access to a controlled price: the sanctions for those who do not recognize this decree involve suspension, but they will not have to do with paths that lead to dismissal ".